The Royal Observatory has several possible birthdays. I have, for example, seen it given as 4 March or 22 June 1675. The first is the date of Charles II's Royal Warrant that ordered the Board of Ordnance to pay for "the support and Maintenance" of John Flamsteed, appointed "our astronomical observator" and charged "to apply himself with the most exact care and diligence to the rectifying the tables of the motions of the heavens, and the places of the fixed stars, so as to find our the so much-desired longitude of places for the perfecting the art of navigation".

The second date is that on another Royal Warrant, this time authorising the construction of the "small observatory within our park at Greenwich, upon the highest ground, at or near the place where the castle stood". It stated that Sir Christopher Wren, the surveyor-general, should design the building (although it is clear that his assistant Robert Hooke actually led the project), and that its cost, defrayed in part by selling off old gunpowder, "shall not exceed five hundred pounds".
Another possible date is 12 June 1676, when there was a partial solar eclipse which was to be viewed as something of an opening ceremony: it was hoped that the King would attend but he did not, Lord Brouncker, President of the Royal Society, being the guest of honour instead. Or perhaps 10 July, which is when Flamsteed began living at the Observatory with his two servants, or 19 July, which is the date on which his long series of Greenwich observations began?
But no. As the title of this post suggests, the real birthday of the Observatory is today. 10 August 1675 is the date on which the foundation stone was laid and - something which clinches it - the date for which Flamsteed cast a horoscope. The horoscope, of course, also tells us the exact time that the foundation stone was laid: 3.14pm. 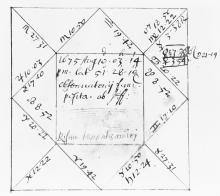 It should come as no surprise that a 17th-century astronomer was capable of drawing up an astrological chart. Although astronomy and astrology are now very different things, in the early modern period they were still closely allied. In this context it can be useful to think of astronomy as the observational practice that supplied data for a number of purposes, chiefly navigation, surveying, timekeeping and astrology. Flamsteed, like many other early modern astronomers, supplied his data to astrologers and evidently knew well how to cast and interpret a horoscope himself.

Nevertheless, this horoscope remains intriguing, for a number of reasons. Firstly, it includes the Latin motto "Risum teneatis amici", taken from Horace and usually translated as "could you, my friends, refrain from laughing?". Was this meant sarcastically, or defensively? Secondly, John Flamsteed had, in the 1670s, compiled a serious, but unpublished, attack on astrologers (which also survives in Cambridge, RGO 1/75-76). Yet the horoscope itself was cast properly and it appears that the date and time of laying the foundation were delibately chosen as auspicious. Flamsteed's attitude is, therefore, well summed up in an article by Michael Hunter as "an ambivalence towards the art coexisting with overt hostility" directed at bad and ignorant practitioners.[1]Although astrology had nothing to do with it, the Royal Observatory got off to a reasonable start and, whatever run-ins Flamsteed himself had with the Royal Society and it later president, Isaac Newton, the institution itself was remarkably persistent. Despite the death of its major patron, Jonas Moore, a constitutional revoution and the death of its first astronomer, the Observatory was to survive for three centuries. The building itself will, I hope, last several centuries more!----------------------------[1] Michael Hunter, 'Science and astrology in seventeenth-century England: an unpublished polemic by John Flamsteed', in Patrick Curry (ed), Astrology, Science and Society: Historical Essays (Woodbridge, SF: 1987).Image: Horoscope of the Royal Observatory, cast by John Flamsteed (RGO Manuscripts, University of Cambridge: RGO 1/18)

Shop
The Quantum Astrologer's Handbook
This is a landmark in science writing that resurrects from the vaults of...

Shop
Universe: Exploring the Astronomical World
A gorgeous exploration of the ways in which humans have documented the beauty...