Skip to main content
You are here:
Home Discover our stories and collections Museum blog 'Anvilled Stars' at the Royal Observatory

'Anvilled Stars' at the Royal Observatory 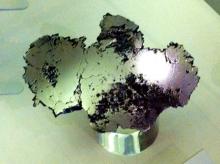 If you're up at the Observatory in the next few months, see if you can find a collection of meteoritic mirrors scattered throughout the Astronomy galleries. There are six mirrors on display next to objects and instruments that have played a key role in our study of the Universe. They're beautiful, enigmatic objects and there's no explanation or text in the galleries to tell you why they're there. It's up to you to investigate and come to your own conclusions...

Artist and blacksmith Matthew Luck Galpin's 'Anvilled Stars' are meteorites that have been heated, hammered,

ground and polished into mirrored works of art. The meteorites used to create 'Anvilled Stars' are thought to be more than 4.5 billion years old, and they started out as part of the asteroid belt during the early life of the Solar System. They reached Earth between 4000-6000 years ago after a journey lasting millions of years; they shattered as they entered the atmosphere and crashed into the northern Argentinian desert, witnessed by the local people. The place where they landed is now called Campo del Cielo - the Field of Heaven.

Meteorites are pieces of rock and metal that have fallen from space, providing some of the only physical evidence we have to study the formation of the Solar System. Mirrors are significant not only because they reflect us and our world, but also as the essential components of instruments such as telescopes that we use to study the Universe. By bringing the two together Matthew's work is a creative response in relation to the Universe and our place in it. Matthew says of the artwork: "by working these iron meteorites and mirroring their trajectory, 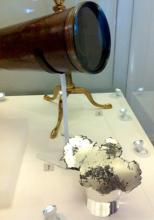 I feel closer to belonging to their journey through space and time, reaching a point of reflection of our part in it all".

Each mirror is unique, and their irregular shapes and cloudy impurities are a joint product of their ancient origins and their transformation into manufactured objects in Matthew's workshop. The six mirrors form an imaginary 'constellation' across the Observatory site and it's up to visitors to locate them all. Five more of Matthew's mirrors are currently on display at the Science Museum in South Kensington, forming a larger constellation of eleven Anvilled Stars spanning London - just the latest chapter in their continuing 4.5-billion year story.

The Impact exhibition (open at the Royal Observatory until 29 August) takes a look at the fiery debris that bombards earth from space, sometimes laying waste to vast areas and even triggering mass extinctions of plants and animals. It also explores the vital clues that asteroids and meteorites provide about the violent formation of the Solar System.

Shop
Capturing the Universe: The Most Spectacular Astrophotography from Across the Cosmos by Rhodri Evans
Our enduring fascination in our solar system and the wonders of the universe...