There has been a bright green, glowing object visiting our night time sky over the months of December and January. No, it’s not an alien spacecraft but a comet called Comet Lovejoy C/2014 Q2. It was discovered by Terry Lovejoy, an amateur astronomer in August 2014 and had already found four other new comets. 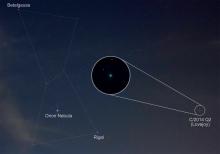 Photo of Comet Lovejoy taken from Greenwich on 7th January. Photo by Tom Kerss, one of our Planetarium Astronomers.

You can think of comets as dirty snowballs – lumps of ice (made up of frozen water and other frozen gases) with bits of dust. They’re probably made up of the left-over gas and dust that didn’t go on to make the Sun and planets. As they’re usually so far away from the Sun, all of their material is frozen. This part of the comet is known as the nucleus. Sometimes their elliptical orbits bring them close to the Sun where we can see them, either through a telescope, or if we’re lucky, just with our naked eyes. This also warms up the comet and the ice sublimates, turning from a solid straight into a gas. An atmosphere, called a coma, starts to form around the nucleus of the comet. Comet Lovejoy’s coma has a green tinge to it because it has diatomic carbon molecules which glow green when the solar photons excite them. As the comet nears the Sun, some of this material gets dragged to make its tail. There are two tails that always face away from the Sun and in the direction of the solar wind. The first tail is made up of dust that reflects sunlight which gives it a whitish-yellow colour. The plasma tail consists of ionised gas (the atoms of the gas has lost their electrons) and usually glows blue because the carbon monoxide gas fluoresces under the Sun’s ultraviolet light. 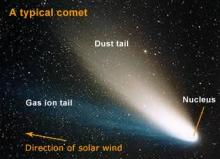 Parts of a comet, image by Alessandro Dimai. Comet Lovejoy isn’t very dusty so its dust tail is very faint.

Sometimes the Earth ploughs into the debris left behind by comets. The bits of dust fall through the Earth’s atmosphere and burns up as it does so. When that happens, we can see meteor showers, or shooting stars, nature’s very own fireworks display. 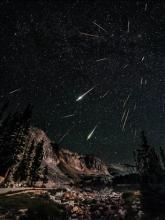 Edmond Halley, the second Astronomer Royal who worked here at the Royal Observatory Greenwich (ROG), is well known for proving that the comets seen in 1456, 1531, 1607 and 1682 were in fact the same comet and correctly predicted that it would return in 1758. Sadly, he died before this happened, but that comet is now called Halley’s Comet.

Bust of Edmond Halley at the ROG.

Comet Lovejoy reached its closest approach to the Earth on 7th January where it was about 44 million miles away (or just less than half the Sun-Earth distance). It’ll be at its closest to the Sun on 30th January where it will be 119 million miles away from the Sun. After this time, the comet will zoom away from the inner Solar System and head out to the Kuiper Belt 110 billion miles away. There is still a few days left to see the comet, but by now you will need a pair of binoculars or a telescope and a dark cloudless sky as it gradually fades away. But if you do miss it, you’d just have to wait another 8000 years for it to come back.

Comet Lovejoy zooms by the Pleiades. Photo by John Chumack

Shop
The Planets By Professor Brian Cox and Andrew Cohen
Pre-order. This book is published 23rd May, so orders will be sent after this...

Shop
Aurora Over a Glacier Lagoon
Insight Investment Astronomy Photographer of the Year is the largest...