Between 2006 and 2012, the Cutty Sark Trust undertook an ambitious conservation project to save the ship from collapse. Recollections is a series of short interviews with key people who worked on the project.

Carole Souter, Chief Executive of the Heritage Lottery Fund, the main funders of the project, gives her insights.

What was special about Cutty Sark that led the Heritage Lottery Fund to support her conservation?

She is of course the last surviving tea clipper, and with a very long association with Greenwich, the place where she now sits. And she was at enormous risk – she just would not have survived without this project. The challenge was what to do.

HM The Queen at the official opening of Cutty Sark to the public, 25 June 1957 © Cutty Sark Trust

Were you concerned that raising the ship would be seen by some as too radical a solution?

It was more the intervention inside the ship and the impact on the historic fabric that was controversial rather than the raising. We were very concerned to make sure that we had convincing arguments and evidence that this was going to work, but this applies to all our projects. Cutty Sark and the project team provided the evidence that this was the best solution for the ship’s fragile frame. With big technical projects like this, it would be nice to wave a magic wand and have it all done, because as time goes on, people become more and more anxious. I have to confess, even although I knew intellectually it would work, I did genuinely have sleepless nights.

Can you remember your reaction when you heard the ship was on fire?

I remember turning on the television and thinking that was it, the project was over, because it looked like everything was gone. I couldn’t see how there would have been enough left to make a restoration of any kind. Then, at the moment when it became clear that Cutty Sark could be rescued, the challenges and the costs went through the roof. But when my trustees saw the proposals coming forward to continue the project, they thought, yes, this is the right thing to do and agreed to give an extraordinary uplift grant.

What did HLF hope to achieve by the project?

As well as conserving the ship, we sought to give her the chance of a sustainable future, both in the sense of being able to maintain the fabric, and that, financially, she would not become a drain on everyone’s resources. And that was a really challenging element of the project, given the limited footprint of the ship’s dock. Where were you going to put the things you needed? The architectural solution was very clever. There is no doubt we would not have funded it if we did not see a sustainable solution. It was also really clear to us that, to achieve long-term stability, Cutty Sark should be working closely with the other maritime attractions in Greenwich. This we helped to facilitate. We always talk about the Heritage Lottery Fund being about more than just money, and this is one of those examples where you can say absolutely this is what we mean. We didn’t just hand over a cheque and say ‘sink or swim’: we took the time and effort to talk to Cutty Sark trustees and we really tried to pull all the pieces together. 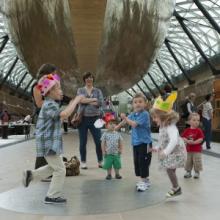 Looking back, what are your thoughts about the project?

At the end of the day, although the team on the ground delivered it, my team can say it wouldn’t have happened if we hadn’t worked and supported it in the way we did. There are only about half a dozen projects around the country where I think I can genuinely say that, leaving the money aside, that wouldn’t have happened if we hadn’t really got in there with the project team.  All projects of this kind have to be a balance. You can have a perfect restoration which will satisfy ship historians or architectural historians, which simply doesn’t generate an income stream. There is no point in doing that. People need to be able to enjoy the things we spend the money on. And Cutty Sark strikes that balance. Now she’s wonderful!

The ship after hours. A talk by Sir Robin Knox-Johnston in the Studio Theatre in the lower hold of the ship © Cutty Sark Trust/Emile Holba

Watch our short trailer and see how the ship looks today:

Shop
Cutty Sark The Last Of The Tea Clippers
Awarded a Mountbatten Certificate of Merit at the Maritime Media Awards 2015....