Between 2006 and 2012, the Cutty Sark Trust undertook an ambitious conservation project to save the last remaining tea clipper. Recollections is a series of short interviews with key people who worked on the project.

Why did the ship need this conservation project?

Even in the mid-1990s, it was known that something had to be done to stop Cutty Sark’s iron framework rusting away. Otherwise we would have ended up with a heap of metal and planks in the bottom of the dock. My ambition when I joined in 2001 was not only to preserve as much of the ship as possible but also to turn her back into a ‘must-see’ London destination, as she had been 30 years ago. She is one of the greatest maritime icons, not just of London but of the world. 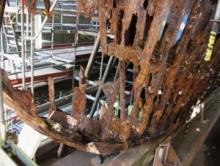 Cutty Sark - Corrosion at the stern

Just a few months into the project the ship caught fire. What was it like to hear this news?

A researcher from a radio programme rang about 4.30 a.m. and said: ‘I’d like to get your reaction to the fire on board Cutty Sark’. At first I thought it was a hoax, but it was soon clear that I needed to get down to Greenwich, where the ship is berthed, as quickly as possible. When I got close, there was a pall of black smoke and a very evocative smell of Stockholm tar. At that moment, I thought we’d lost the ship. But when I reached her, I took two steps onto the still-smouldering ’tween deck and thought: ‘This is a mess but it is retrievable.’ 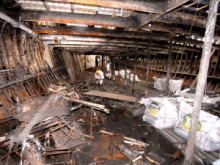 At a cost of £50 million, did you ever feel you would never raise the money?

The Heritage Lottery Fund was amazing. Not only did they help get the project get off the ground, but they also stepped in with an additional £10 m grant to help us cope with the aftermath of the fire. But despite all the surveys we undertook, even before the project started, the truly dreadful extent of the corrosion, particularly at the stern, was only fully revealed when we removed all the planks. Then the cost of the project went up £5 million almost overnight. And at the very same moment, a major prospective funder reneged on a multi-million pound promise. But at that critical moment, one of my trustees stepped forward with a huge donation. He saved the project. HRH The Duke of Edinburgh was also a great supporter from the very beginning. Thanks to his backing, our small trust was able to punch well above its weight and secure some very large donations from individuals, trusts and foundations. And Lord Sterling also had an immense impact on the project. He not only opened many doors but also assembled a team of very experienced people to get the project back on track. Greenwich Council and the Department of Culture Media and Sport –were hugely generous. The public response too was very moving and quite extraordinary. It still amazes me and reinforces in my mind how special Cutty Sark is.

Why do you think Cutty Sark is so special?

I suspect there are more models and paintings of Cutty Sark around the world than any other ship ever launched, by a long way. When most people imagine a sailing ship, it is of a vessel with acres of canvas flying and a streamlined hull cutting through the water – they are imagining Cutty Sark. She has been part of the London skyline for more than half a century and fifteen million people went on board her before the end of the century. She symbolises an era, now lost, but with values of courage, of tenacity, that are still relevant today. 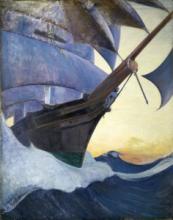 How do you feel now the ship has reopened to the public?

I am enormously proud of what we have achieved. We saved the ship from almost certain destruction. But Cutty Sark has been reinvented by each new generation – tea clipper to wool clipper to cargo vessel to sail training to museum ship and now a major visitor attraction and an integral part of Royal Museums Greenwich. We have been privileged to have a once-in-a-lifetime opportunity to see Cutty Sark safely on to the next stage of her journey.

Take a look at the on-board experience in our short trailer:

Shop
Cutty Sark Brass Brooch Pin
Own a piece of the world’s only surviving tea clipper with one of these...

Shop
Cutty Sark Brass Triangle Necklace Sterling Silver
Own a piece of the world’s only surviving tea clipper with one of these...