We have very long nights in the northern hemisphere during December – perfect for astronomy!
Here in Greenwich, the sun is setting at 4pm in the afternoon and not rising again until 8am – giving 16 hours when the Sun is below our horizon.
When you take evening and morning twilight into account, we have 14 hours of beautiful star-filled darkness... if you can get far enough away from light pollution.
The long nights are due to the Earth being tilted by 23.5°. In December, the northern hemisphere of the Earth is pointing away from the Sun, so the Sun appears much lower in the sky, and its warmth is diminished. On 3 January 2008 the Earth is actually 3.4% closer to the Sun than in June – but it certainly doesn't feel like that here in the Northern hemisphere!
In the early evening around 6pm, we look westwards to see the patch of sky that used to be directly above us in winter. So, ironically, the Summer Triangle is visible throughout winter! In fact, from the UK, Deneb is a circumpolar star – meaning that it never sets below the horizon.
During December, we have four hours after sunset to see the Triangle before it follows the Sun below the horizon. By February however, you will only be able to see the Triangle in the early morning sky, just before sunrise. Look at my earlier posting to read about the interesting objects in the Summer Triangle.
Look towards the west this month at 8pm, and you are looking towards the centre of our galaxy, where a super-massive black hole lurks just below the horizon. You need to wait until the summer for a better view of that patch of sky, as we are on the opposite side of the Sun to the galactic centre and so the Sun hides it from view.
Rotate 180° to look east, and you are looking directly out into deep space, towards the constellation of Orion. 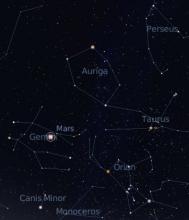 At the bottom of Orion, to the left of Rigel, is the Orion nebula – a cloud of gas and dust, collapsing to form the latest generation of stars, recycling materials from old, now dead, stars. And you can see that for yourself with binoculars.
Mars is also visible towards the east at 8pm, in the constellation of Gemini. Mars appears to the unaided eye as a bright red object, but you will need an expensive telescope to see any details on the surface of the planet.
And finally, Saturn is becoming sociable again! It is rising in the east at 11pm in the constellation of Leo, where you can find it just to the left of Regulus. It is cream coloured and quite bright – take a look through binoculars, and you may be able to see the rings of Saturn, which show up easily in even the smallest of telescopes.
Here's to dark and clear skies in December!