Skip to main content
You are here:
Home Discover our stories and collections Museum blog Eclipses in February 2008

Two eclipses will be visible this month.
First, we have an annular solar eclipse occurring on 7 February 2008, visible in Antarctica and the very southern Pacific Ocean. 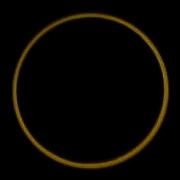 An annular eclipse occurs when the Sun and Moon perfectly align, but the Moon appears smaller than the Sun in the sky, leaving a ring of sunlight visible around the Moon. This is due to the Moon being slightly further away than usual in its elliptical orbit. If you have never seen an annular eclipse, click on the image to the left to see the time-lapse movie (in Windows Media Video format) of the 2005 annular eclipse, as visible from Madrid.
The eclipse is also visible in south-eastern Australia and New Zealand, as a partial solar eclipse. (A partial eclipse occurs when the Sun and Moon do not perfectly align.) In New Zealand, up to 65% of the Sun will be covered by the Moon.
A fortnight later, on 21 February, a lunar eclipse occurs on the opposite side of the sky (and so is visible on the opposite side of the Earth), once the Moon has moved around to the other side of the Earth - from being in-between the Earth and Sun, to being in the Earth's shadow. This lunar eclipse will be visible from Western Europe (including the UK), Western Africa, all of South America, and central and Eastern parts of both the USA and Canada. This lunar eclipse lasts from 00:30 until 6:20 GMT – basically, throughout the night!

Click on the image for a time-lapse movie (format: Windows Media Player)

Full details of both eclipses can be found at the NASA eclipse website.
But why do eclipses usually occur in pairs?

The Moon's orbit around the Earth is tilted by 5 degrees compared to the flat plane of the rest of our solar system. So the Moon is literally going above and then below the solar system. An eclipse can only happen when the Moon is moving up or down across the flat solar system, passing in front of the Sun – in astronomy terms, an eclipse can only happen when its nodal axis (see figure) is aligned with the Sun.
That is what will happen in February, and again about 6 months later, when the Earth has moved to the other side of the Sun, in August 2008.
If the Moon happens to pass through the Sun-side nodal axis (point 2) within 5 days of them aligning, then you get a total (or annular) eclipse of the Sun. If the Moon passes through this point within 15 days of the alignment, you will get a partial solar eclipse instead.
On the other side of the Earth, if the Moon passes through the shadow of the Earth (point 1), a lunar eclipse will occur. And you have about 10 days grace in which to do that, around the time that the nodal axis points at the Sun.
With all this leeway for getting an eclipse around the time the nodal axis points at the Sun, it is technically possible to get 3 eclipses in one month! This last occurred in July 2000, when there was a partial solar eclipse near Antarctica, then the Moon raced around to enter the heart of the Earth's shadow a fortnight later, and the month finished with another partial solar eclipse visible from near the Arctic.

Shop
I-Spy In the Night Sky
Search for over 140 sights in the night sky with this i-SPY guide. This fun...