This week's longitude legend is Captain James Cook, who features in not just one but two exhibitions currently on at Royal Museums Greenwich. The Art & Science of Exploration, 1768-1780 in The Queen's House displays the exceptional paintings, prints and drawings by specially commissioned artists on Captain Cook’s 18th-century voyages of discovery. While in Ships, Clocks & Stars Dance's portrait of Cook hangs over K1, his 'trusty friend', which was the first attempt to transform Harrison's H4 seawatch into an affordable timekeeper that could be used across the British navy.

Between 1768 and 1779, James Cook led three ambitious voyages of discovery to the Pacific. These were opportunities to test the astronomical and timekeeper methods of finding longitude over great distances.  All three voyages circumnavigated the globe, charting New Zealand, Western Australia, a considerable number of Pacific islands and the north-west coast of America.

A New and Complete Chart of the World; Displaying the Tracks of Captn Cook …Thomas Bowen, 1790This chart shows the routes taken by James Cook’s three Pacific voyages between 1768 and 1780.

Astronomers were also sent on these expeditions to make observations and teach the lunar distance method. The new instruments and techniques became important for surveying and charting on these voyages. This was part of a series of activities to understand the world through the collection of data, natural specimens and objects. 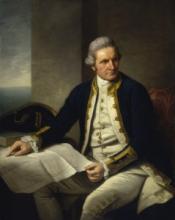 Cook joined the Royal Navy in 1755, aged 26. During his early career he showed great ability as a navigator and surveyor. This made him a good choice to command three voyages to the Pacific Ocean. This portrait was painted following the second (1772–75). It was commissioned by the naturalist Sir Joseph Banks who was on Cook’s first voyage (1768–71).

The aim of Cook’s first voyage to the Pacific (1768–71) was to observe the transit of Venus across the Sun (1769), and to find evidence of a large continent in the Southern Ocean. For this voyage, the Royal Navy purchased the Whitby collier Earl of Pembroke, renamed it and fitted it out for Cook’s research expedition.

On this first voyage the crew successfully tested lunar distances using sextants and the Nautical Almanac.

At Nevil Maskelyne’s suggestion, Larcum Kendall’s K1, and marine timekeepers by John Arnold, accompanied Cook on the second voyage (1772–75).  K1 was an almost exact copy of John Harrison’s sea-watch, H4. It cost the Board of Longitude £500. It performed magnificently on the voyage and Cook came to call it his ‘trusty friend’ and ‘never-failing guide’, accompanying him once more on his third voyage. 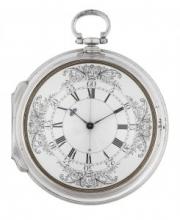 Both methods continued to be tested and used on the third voyage (1776–80). This draft list of equipment supplied to Captain Cook’s third voyage (1776–80) was drawn up by the Astronomer Royal, Nevil Maskelyne. The list details instruments to be used while at sea, including sextants, marine timekeepers and books including the Nautical Almanac. There are also larger telescopes and clocks for making observations on land.

List of instruments delivered to Capt CookNevil Maskelyne, 22 May 1776

Cook's voyages were not just a key part of the quest to solve longitude, they also set a new standard in scientific exploration, and brought back a remarkable variety of specimens and observations. To discover more about this aspect of Cook's voyages, why not pop over to the Queen's House and see The Art & Science of Exploration, 1768-80.

Ships, Clocks & Stars: The Quest for Longitude is open daily until 4 January.

Shop
Breadfruit Tea Towel
A practical must-have for any kitchen. Dry dishes and clean up spills with...

Shop
A View Taken in the Bay of Oaite Peha (Vaitepiha) Otaheite (Tahiti)
Hodges' paintings of the Pacific are vivid records of British exploration....