Skip to main content
You are here:
Home Discover our stories and collections Museum blog Models of War

Nick Ball, our Assistant Curator of Ship Models, gives a fascinating insight into some of the models within our collection.

When I look at the beautifully carved Navy Board ship models of the National Maritime Museum it is often easy to forget that these miniatures represent the incredible power of naval warfare. Beauty is not often associated with war, but these models have come closer to war than we might first assume. Their decorative nature should not detract from their use as 3D illustrations of the most advanced warships of the age. Below the waterline the stylised framing of the Navy Board models illustrates the hull form and above the waterline the arrangement of guns, the decks, the position of capstans, hatches, ladders and many other features can all be seen.

It was the value of technical information that ship models held that led to an extraordinary event, during the Second Anglo-Dutch war, in which the English and Dutch fought to control important trade routes. In June 1667 the Dutch orchestrated a daring raid up the river Medway to launch a surprise attack on the English ships moored just off the Royal Dockyard at Chatham.

During this attack the Dutch forced their way past the defensive chain at Gillingham, captured the fort at Sheerness and then burnt the ships Royal James, Loyal London and Royal Oak. Many more ships were destroyed and the Royal Charles was towed off to Holland (where its carved coat of arms from the taffrail can still be seen at the Rijksmuseum). The audacious raid was an enormous shock; the Dutch seemed to strike at the heart of the Royal Navy. Peter Pett Commissioner of Chatham Dockyard was present at Chatham during the raid. Pett was recorded by the famous diarist Samuel Pepys as having “carried away things of great value, and these were his models of ships”. Pepys also notes that during the subsequent inquiry Pett, perhaps slightly sardonically, claimed that “the Dutch would have made more advantage of the models than of the ships”. Pett’s claim may be viewed as an exaggeration or a criticism of the Dutch, but the fact that he dedicated time to rescuing models in a time of great danger illustrates their immense importance.

Peter Pett and the 'Sovereign of the Seas' NMM BHC2949

Recently, after some delving into the records of ship models and a visit to Trinity House, I have become increasingly aware of the fragility of our historic objects in times of war. Trinity House is the organisation that deals with lighthouses and navigation, and dates back to the sixteenth century, and as you can imagine it houses many maritime objects relating to its long history. 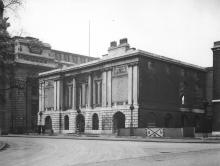 One of these objects was a Navy Board model of the Second Rate Loyal London. The Loyal London model had been made at around the same time as the 96 gun warship Loyal London which was launched at Deptford in 1666 and was burnt at Chatham in the Dutch raid. During the Second World War many objects of significant cultural or historical value were moved out of London to the relative safety of the countryside, but in December 1940 during an air raid Trinity House was hit before many of the objects could be re-housed. The un-planked frame model of the Loyal London, with lavish carved and gilt ornamentation, which had been kept by Trinity House since the late seventeenth century, was reduced to ash in a single night, 273 years after the ship suffered the same fate in the midst of the Medway raid.

In many respects this similar fate can be a point of reflection. With the passing of time objects that were once integral to war can come to be seen as objects of art. For Pett, saving the ship models could be seen as a matter of strategic principle, and keeping the technical details of the models safe. But for Trinity House, preserving the model was as much for its artistic value as its technical value and it is often for this reason that many models survive today in the National Maritime Museum. It is this duality inherent to the warship models that provides me with the most fascination. The twisting splendour of the impressive carvings, sumptuous decoration hugging the stern and quarter galleries combined with their innate technicality, detailed construction and fair lines. For many, the remoteness of time and the jaw-dropping beauty of ship models can diminish their importance as objects of war, but it shouldn’t take an air raid to awaken us to the fact that for ship models, war has never been far away.   Check out  Collections Online to find out about the National Maritime Museum's Ship Model Collection. Guiding Lights showcases centuries of invaluable work by the Corporation of Trinity House to help sailors navigate safely at sea, preventing countless shipwrecks and immense loss of life.

Shop
Navy Board Ship Models
From about the middle of the seventeenth century the Navy’s administrators...

Shop
Ship of the Line - A History in Ship Models by Brian Lavery
Here at The National Maritime Museum in Greenwich, we house the largest...