Skip to main content
You are here:
Home Discover our stories and collections Museum blog My migration story: RE·THINK Migration

Today's guest blog is written by Karen McCarthy Woolf, the Poet in Residence for RE·THINK Migration. She talks about her residency but also her families own migration  story - and how our archives could help trace their journey.

Since I started my residency in the Re:Think space I’ve been thinking about my family migration story. My dad set sail from Kingston, Jamaica and arrived in the UK in June 1957 as part of the Windrush Generation. 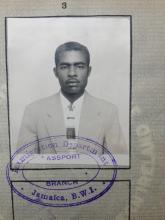 He met my mum, who is from a family of Londoners, at the 100 Club on Oxford Street.

Peter Fryer’s seminal historical work Staying Power was one of my dad’s ‘bibles’.

A passionate advocate of multicultural Britain and community activist, he set up a media-training project in Brixton after the riots in the early 1980s, so that black people could acquire the skills to tell their own stories, rather than suffer misrepresentation in the mainstream media.

He met with the Home Secretary, Douglas Hurd…

and managed to break the ice with his customary flair…

but refused to have his photo taken with Margaret Thatcher when she visited Spectrum International – the radio station he co-founded, as he disagreed with many of her policies, particularly on sanctions in apartheid South Africa.

I’ve also been delving into the National Maritime Museum’s archive and was surprised to find his name aboard the passenger list for the Irpinia. We never knew what the name of the ship was, or at least I wasn’t listening when my dad told me, so there was something very satisfying about this discovery.

Then, digging deeper, I followed the history of the Irpinia which was decommissioned as a sailing vessel in 1976 and chartered by the producers of Voyage of the Damned -- not, as the title initially suggests a low-budget horror flick, but a start-studded blockbuster, which, rather fittingly tells another, very different migration story.

My dad’s migration story is emblematic of his generation, and without it, I wouldn’t be here now. But it is not my own.

It wasn’t until I spoke to Sophie Herxheimer, who’s also working in the Re:Think Migration space and making ink drawings of people’s migration stories that I realised my migration story is far more local and small scale, at least in terms of geographical distance.

Until the end of July I’ll be having an Open Studio every Wednesday afternoon between 1-4 pm when I’ll be asking people to drop in with an object that represents their migration story, whether it’s from Hampstead to Brixton or Toronto to Tottenham via Beijing.

I look forward to hearing them and posting some of them here!