Skip to main content
You are here:
Home Discover our stories and collections Museum blog The night sky for February 2008

The night sky for February 2008

The planet Mars is visible throughout the night this month – just look south for the brightest reddest object, high in the sky. Mars is visible from sunset until it heads towards the low western horizon at 1am. 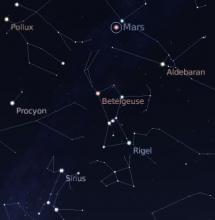 On the evening of 15 February, the Moon is close to Mars, making it even easier to spot. But this meeting of the Moon and Mars only lasts a night, before the Moon continues on its monthly journey around the night sky.
The map to the left can help you find Mars by matching up the surrounding stars – the map shows you exactly what you will see when you look towards the south, before 10pm (after which, you have to start rotating the map significantly clockwise).
Mars is currently in the constellation of Taurus, and so is the red giant star, Aldebaran. Also in Taurus, is the Pleiades star cluster – a beautiful sight! Literally hundreds of stars are visible in binoculars. It often reminds me of a little desert-island of stars hidden in a vast sea of inky black space. It is the little cluster of stars at the far right of the map above.
The ringed planet Saturn is rising at 7pm in the East, close to the star Regulus in the constellation of Leo. As we look up to the night sky on the 20th, the Moon is very close to Regulus. Just to the East of the pair (that is, just to the left for northern hemisphere observers) you will find Saturn. Even a small telescope shows up the remarkable rings that surround the planet. Even though the rings of Saturn look solid through a telescope, they are made up of literally billions of fragments of rocks – some the size of dust, and the biggest ones the size of a small car.
Remember, the planets Mercury, Venus, Mars, Jupiter and Saturn all reflect so much light from the Sun that you can easily see them with your own eyes, albeit at various times of the year. That is why we've known about these planets for maybe 10,000 years or more. You've just missed out on seeing Mercury (it is next visible in the evening sky in May), but Jupiter and Venus can both be seen as the two bright points of light in the early morning sky – look east in the very early morning twilight.
And, finally, Orion is still prominent, with its nebula easily visible with your own eyes. As you look at the nebula though binoculars, even from the light pollution of London, you can see it is very different to the pin points of stars that surround it. Take a look through a telescope, and you get an even more impressive sight!

Shop
Guide To The Night Sky 2019
A month-by-month guide to exploring the skies above Britain and Ireland....

Shop
Starpocket
Up to 70 constellations and 1,500 stars demystified....