Cutty Sark had two bells on board - a 50lb bell with the ship’s name engraved on to it, which was located on the monkey foc’s’le (the raised deck at the bow) and a smaller bell on the poop deck, at the stern.

The bell was primarily used to mark the watches on board which divided up the seaman’s day into four-hour periods of duty. Each half hour of a watch was marked by one stroke and the watch changed, or ended, on 8 strikes of the bell.  Apprentice Clarence Ray references the watches on board Cutty Sark in a letter home to his mother in July 1894: “We start work at 5.30 in the morning but that is every other morning of course because the other watch will be on deck from 4 to 8...in our watch on deck at night we have to keep time and ring the bells” 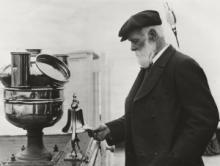 The bell was also used to sound the alarm, for example if the ship encountered fog or if a man was washed overboard, but also the bell would have been used to summon all hands in heavy weather. 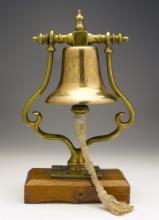 Apparently, the ship’s bell was stolen around 1903 when the ship was under the Portuguese flag by an officer who had once served on Cutty Sark. The Portuguese crew then stole the bell of the nearest ship, the barque Shakespeare. When Cutty Sark was bought by Captain Dowman in 1922, the culprit offered the original bell back, taking Shakespeare’s bell in exchange.

Special
Explore Cutty Sark on your phone
Welcome on board! This page is designed to make it easier for you to watch...

Shop
Cutty Sark - Last of the Tea Clippers
An updated and expanded special edition to celebrate the 150th anniversary of...