Skip to main content
You are here:
Home Discover our stories and collections Museum blog From sailors to sovereigns: the correspondence of a Greenwich Hospital treasurer

From sailors to sovereigns: the correspondence of a Greenwich Hospital treasurer

The Caird Library and Archive has hundreds of manuscripts and printed works related to Greenwich Hospital, but only one substantial collection of papers of a naval officer from his time as Treasurer of the Hospital.

Vice-Admiral Sir Thomas Boulden Thompson was the Treasurer and Receiver of Greenwich Hospital from 1816 until 1828, the year he died. He was the penultimate treasurer and the post was abolished in 1829 when governance of the Hospital was overhauled. The Treasurer’s office oversaw the finances of the Hospital, and so, unsurprisingly, much of the collection of papers that we hold from Thompson’s time as treasurer comprises his financial accounts. However the papers that I found particularly interesting while cataloguing this collection are his letters, since Thompson, in this role, corresponded with individuals from all walks of life.

The Hospital, which was a home for old and infirm seamen rather than a strictly medical facility, was funded in several ways, and one of its main sources of income was prize money. The ‘prizes’ in this instance were enemy vessels captured by the British navy. Agents were appointed to oversee the sale of the vessels and their contents, and the proceeds, or ‘prize money’ was distributed among the crews of the captor ships. The agents were legally obliged to hand any unclaimed prize money over to the treasurer of Greenwich Hospital.

However prize claims were often late, or disputed, and the clerks employed by the Hospital were tasked with dealing with these cases. Amongst Thompson’s papers is a letter from a seaman, Peter Cooper, who wrote to the Hospital in 1823 about prize money that had been owing to him for over 20 years for the capture of a ship called the Nile. A service record issued by the Prize Office at Greenwich Hospital, which is also included in the collection, shows that the money in question − a sum of 2 pounds, 16 shillings and 9 pence (about £125 today) − had been paid by agent Alex Davison to Captain Raggett in 1802, but the money never made its way to Cooper. As he notes in his letter:

‘…my third payment of Prize money for the Nile was Paid to Captiain Raggett…which Gentleman I never impowered to lift any of my money and if Davidson the Agent Paid him he surely is in my Debt for the sum but how to recover that I am at a loss without your Direction.’

At the other end of the scale, Thompson was called upon to petition Charles X, the King of France, for unpaid prize money – in this instance the more substantial sum of £12,000 (over £500,000 in today’s money) – owed to the crew of the British ship, Confiance, which captured the island of Cayenne in French Guiana in 1809. In 1828 Thompson received a letter from the Navy Board, detailing how two agents, Mr Channon and Mr Cook, both went to Paris, independently of one another, to claim this money on behalf of the captors, with the result that the French government refused to acknowledge either of them, and the sum remained unpaid.  The letter notes that the ship’s captain, Sir James Lucas Yeo had since died, and both Channon and Cook were bankrupt. Thompson did not have to draft the petition himself – he was simply asked to approve the wording and sign it, as Treasurer of Greenwich Hospital:

‘Under these circumstances the Board think that a memorial in the name of the Treasurer of Greenwich Hospital should be presented to the King of France on behalf of the captors …. I have proposed the enclosed memorial for the Hospital, which is after it is ingrossed on parchment (if you approve of the wording) I am to request you to sign. The result I hope and think will be the payment to the Treasurer of Greenwich Hospital, on behalf of the captors of the £12,000.’

Letter from the Navy Board to Sir Thomas regarding the recovery of prize money owed by France to the British captors of Cayenne, Guiana in 1809 (Item ID: THM/140/10/10)

Draft copy of a petition and memorial to the King of France for the recovery of prize money owed to the captors of Cayenne (Item ID: THM/140/10/10)

Another source of income for the Hospital was the Greenwich Chest, which was funded by the monthly deduction of sixpence from seamen’s pay. The Greenwich Chest had started out life as the Chatham Chest, established during the Anglo-Spanish War towards the end of the 16th century, but it was transferred to Greenwich Hospital by Act of Parliament in 1803. Incidentally, the Chest was not just a concept but a physical object which survives today and is held by the museum 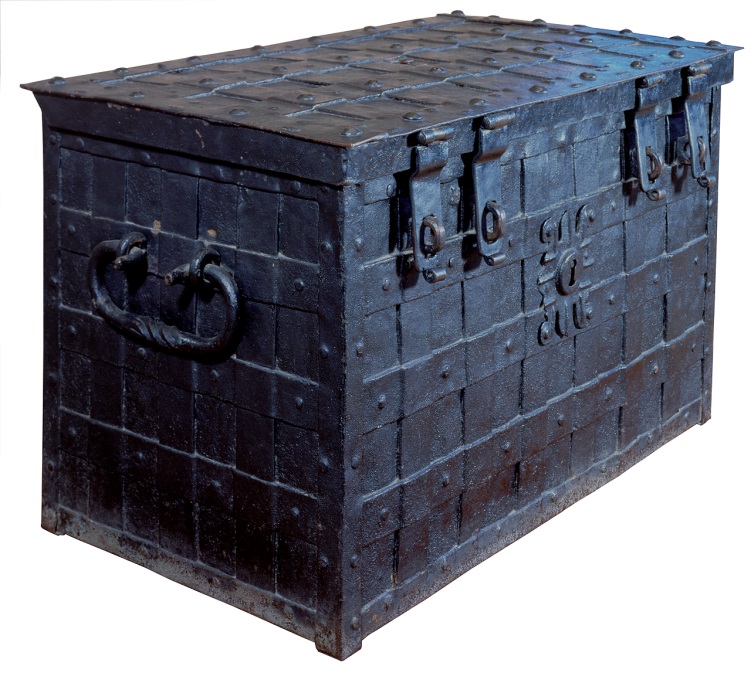 There is an interesting handwritten document included in Thompson’s papers about the  ‘sixpences’ paid to Greenwich Hospital (Item ID THM/140/8/6). Unfortunately it is not clear who wrote the paper (it almost certainly was not Thompson himself), but it seeks to justify the obligation of merchant sailors to contribute to the Chest, since, according to the author

‘It is complained that these sixpences bear hard on the merchant and are paid without any adequate reward or compensation to the merchant or merchant seamen’.

Amongst his arguments in favour of the contribution, the author claims that the cost of accommodating a retired seaman for one year at Greenwich Hospital equated to one hundred years’ worth of sixpences. He concludes that

‘I am of opinion Parliament acted with great just and judgement when it authorised the stoppage of sixpence a month of the merchant seaman’s wages for the support of Greenwich Hospital, and that both the merchant and seaman are most amply compensated for this assessment.’

Other correspondence in this collection relates to Greenwich Hospital appointments. It would appear that some of these posts were highly sought after, and the competition was quite fierce, even ruthless. One series of letters relates to the position of Deputy Receiver of Greenwich Hospital Monies in the Bahama Islands. Thompson initially received a letter in 1820 from H.M. Dyer on behalf of a ‘near relation’, Mr John Campbell Lees. Dyer writes

‘…may I venture on the liberty of saying to you that, should any vacancy happen … in the office of Deputy Receiver of Greenwich Hospital Monies (which is not very improbable) I should feel much obliged if you would honour him with that Appointment.’

Evidently, Sir Thomas did appoint Mr Lees to the post and received a thank-you letter from him in 1821. However, Thompson subsequently received a letter from the former Deputy Receiver, A. Murray, in which he expressed a desire to know why he was replaced, declaring ‘no person could more honourably & punctually discharge his duties than I did’. In his letter Murray asks if Mr Lees’ stepfather had told Thompson that Murray intended to resign, and he enclosed a copy of a letter that Lees’ stepfather – a certain H. M. Dyer - had written to him about the post, along with a copy of his reply to Dyer in which Murray had declared:

‘With respect to the situation which I hold in the Greenwich Establishment, I beg to assure you now, as I did when you mentioned the subject to me – that I had not the most distant intention of resigning it – unless compelled to do so…’

Murray ends his letter to Sir Thomas by stating that he has ‘full confidence of your doing what you may seem right & proper’. However if Mr Murray was hoping to be reinstated to his former situation Thompson’s succinct reply suggests that he was to be disappointed, and also implies that Murray was the victim of skulduggery:

‘…Mr Lees was appointed the Deputy to the Treasurer of Greenwich Hospital in the Bahamas in consequence of an official communication of the 17th of April 1821 from Mr Dunscomb your agent then in which he states that you had resigned, & solicits that he may be appointed to the vacant situation.’

Art for all, art for free

Canaletto’s view of Greenwich Hospital and the Queen’s House

William III. The Royal warrant, granting the site for the...