Skip to main content
You are here:
Home Discover our stories and collections Museum blog Ship’s Birthday Blog 3: The building of Cutty Sark

Scottish ship-owner Jock Willis commissioned the building of Cutty Sark from a young company named Scott & Linton in late 1868. The contract for building the ship was signed by both parties by 1 Feb 1869 and was due to be delivered by 30 July that year. 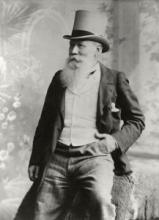 Cutty Sark was to be a composite ship—a vessel with iron frames onto which wooden hull planks were fixed.  Indian teak was used for the hull planks, with the exception of the lowest planks which were made of American rock elm. The hull was then sheathed with Muntz metal – an alloy of 60% copper, 40% zinc with a trace of iron.  This protected the planks and prevented weeds and barnacles from attaching themselves to the hull and slowing the ship down.

Cutty Sark is an example of an extreme clipper—a vessel designed for speed to exploit the competitive market of the time. A clipper ship is defined by a long narrow hull, sharp bow, raked masts and huge sail area, making for an impressive and beautiful appearance.

Jock Willis had drawn up an exacting specification including a teak deck, teak panelled crew accommodation, gilded carved decorations at the bow and stern as well as extensive brass fittings.  Scott & Linton’s work was to be carried out under the supervision of Willis’s appointed surveyor - Captain George Moodie, Cutty Sark’s first Master - who was entitled to examine the vessel, materials and workmanship, and ensure Willis’s high standards were being adhered to.

Building Cutty Sark was the biggest undertaking to date for Scott & Linton and Willis’s demanding terms and contract put Scott & Linton in serious financial difficulties by the summer of 1869. The delivery date of July was missed which incurred heavy fines for the company as a result. Finally, work stopped on site for Scott & Linton in September 1869 and the completion of the ship passed to Scott & Linton’s creditors who carried out the final stage of construction.

Eventually, Willis’s new vessel was launched on 22 November 1869, as reported in The Dumbarton Herald: “On Monday afternoon there was launched from the shipbuilding yard of Messrs Scott & Linton, a handsome composite clipper ship of the following dimensions: —length, 210 feet; beam, 36 feet; depth of hold, 20 feet 9 inches, and about 950 tons burthen.  As she left the ways she was named the “Cutty Sark” by Mrs Moody, wife of Captain Moody.  The Cutty Sark is intended for the China tea trade, and is expected by her owners to be one of the fastest ships engaged in that traffic”.

Shop
Cutty Sark Tudgay Shortbread Rounds
The perfect accompliment to a cup of tea, these shortbread rounds make for a...