Skip to main content
You are here:
Home Discover our stories and collections Museum blog So longitude, farewell

This, as they say, is it. After just over five years of sometimes frenzied activity (some of which I've tried to capture in a project outcomes page), the Board of Longitude project has come to an end. 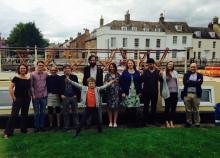 (Most of) the team and colleagues at the final project meeting, Ely, July 2015

Well, almost. Our AHRC funding finished at the end of July 2015, but there's a bit of life left in the project. First off, we have two major publications in progress. The first to come out will be Navigational Enterprises in Europe and its Empires, 1730–1850, which is edited by me and Becky and should be published (by Palgrave Macmillan) by the end of the year. It brings together authors from several different countries to explore European experiences in the development of navigational techniques and instruments in the eighteenth and nineteenth centuries.

Navigational Enterprises will complement a second volume, The Board of Longitude 1714–1828: Science, Innovation and Empire, edited by Alexi and also due to be published by Palgrave Macmillan, hopefully in 2016.  This will be a thematic study of the Board's history, with contributions by many of the project team.

Other project-related activities continue over the next months (and even years, perhaps) too. Ships, Clocks & Stars: The Quest for Longitude is still on its international tour. Shortly it will move from the Folger Shakespeare Library, Washington DC, to Mystic Seaport, where it opens on 19 September.In the spring, it will take a much longer journey to the Australian National Maritime Museum, before the objects return to Greenwich at the end of 2016.

A good way of signing off, I thought, would be to show an image we came across rather late in our research, but which shows very nicely one of the themes we've tried to bring to the fore in the last few years.

It's the frontispiece to The Projectors. A Comedy (London, 1737), possibly by William Hunt, a play that lampoons a whole range of schemers. Longitude gets a couple of mentions. Having claimed he will give £10,000 to each of his two daughters, one of the titular projectors, Shirtless, confesses, ‘I cannot say, that I have yet the Money in specie; but I am sure of finding out the Longitude in a few Months, and you know the Reward for that, Mr. Tarrier. In the mean Time I am soliciting for something for a Discovery I have made for the Cure of the Bite of a Mad-dog.’ (It's a nice coincidence that Nevil Maskelyne's manuscripts include a similar cure). Later on Shirtless claims to have ‘almost found out the Longitude, and only want much about the sum you mention, to make two or three Experiments, that would complete the Discovery.’ This elicits the reply, ‘So then part of my two thousand pounds is to be blown up on Hamstead Heath, I suppose.’ - an allusion, surely, to William Whiston's publicly advertised experiments with mortars from Hampstead Heath and Blackheath.

I love the frontispiece for the way it shows the different schemes on offer, with the projector in the centre holding out a longitude petition. It also emphasizes nicely the link with other supposedly impossible schemes, including the Philosopher’s Stone, here cast at the projector's feet.

So farewell. Our project is nearly over. We hope this one's not been a fool's errand.

Shop
Astrolabe Asineus
Perfected by Arabic and Persian astronomers, by the end of the seventeenth...