Skip to main content
You are here:
Home Explore by theme Museum blog A journal from HMS Hood

A journal from HMS Hood

An interesting item from MSS/84/047, a midshipman’s journal kept by Lieutenant Peter Reginald George Worth DSC, RN, from his time aboard HMS Hood, prior to the outbreak of war in 1939.

MSS/84/047 includes numerous material, Lieutenant Worth’s midshipman's journal, service documents, identity card, citations, correspondence, printed material including service in the Royal Navy between 1936 and 1958. It also includes items relating to his brother Lieutenant J. H. Worth lost at sea in HM submarine Usurper in 1943.  The Usurper was believed to have struck a mine and was lost with all hands. 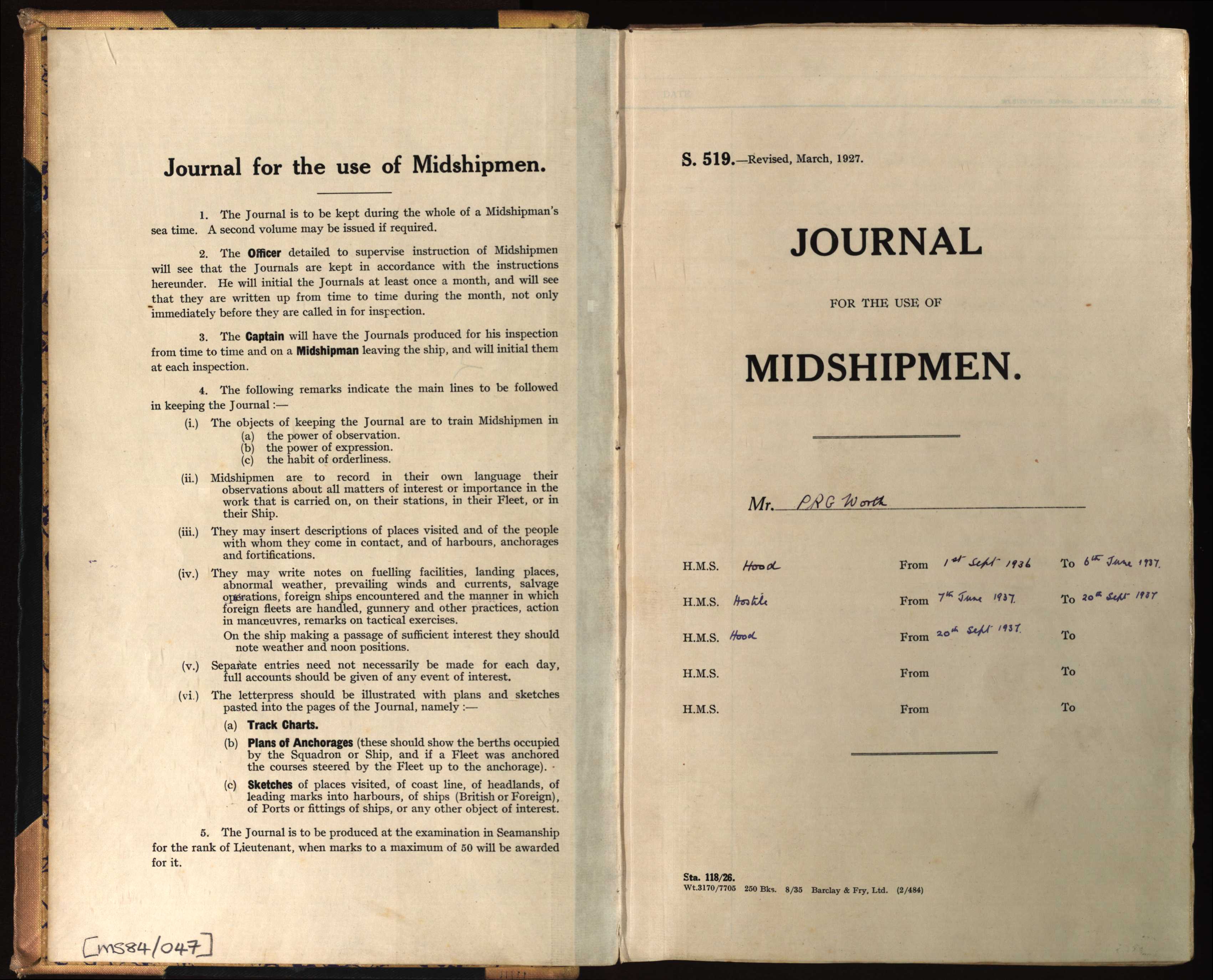 The battle-cruiser HMS Hood was launched in 1918, in its day the Hood was said to be the fastest and largest armoured battle-cruiser in the World.  With a displacement of just over 41,200 tons, built at Clydebank in Scotland, construction took two years to complete, the nickname of the ship soon became “The Mighty Hood” and the pride of the Royal Navy.  The outbreak of the war on 3 September forced HMS Hood into immediate service, though various modern modifications were outstanding, the ship now almost twenty years old.

The Hood’s fate was sealed at the Battle of the Denmark Strait on May 24 1941, when HMS Prince of Wales and the HMS Hood engaged the German battleship Bismarck and the heavy cruiser Prinz Eugen, both ships were attempting to gain access into the North Atlantic to intercept and attack Allied merchant shipping.  While exchanging fire with Bismarck, one of the Bismarck’s shells ignited over a hundred tons of cordite in the Hoods aft magazines, cordite being an explosive which replaced gunpowder in the Victorian era.   Due to extensive damage caused by the explosion to Hood’s hull the ship sank within three minutes, of the ships company of 1418 men, only three survived.  Long after the war a German sailor from Bismarck stated after the Hood exploded there were no celebrations on the Bismarck.  After the loss of Hood, HMS Prince of Wales, which was severely damaged continued the fight, however it soon became obvious if the battle continued the ship could also be lost, therefore the Prince of Wales withdrew.  Later, the same month, the Bismarck was also sunk with the loss of 2000 lives on 27 May 1941. 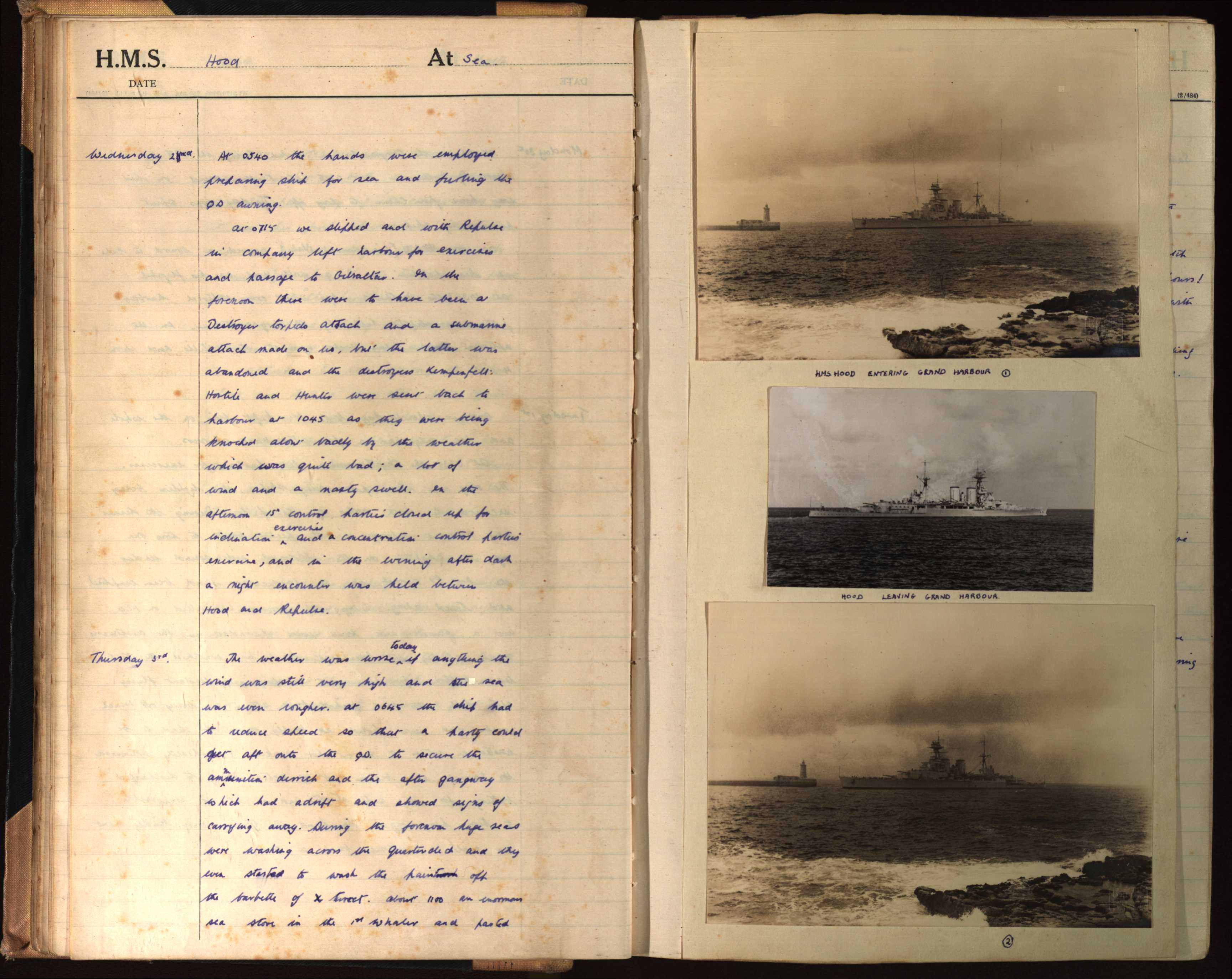 Journal page, dates, 2/3 December 1936, with insert of photographs of HMS Hood which may never have been released in the public domain (RMG ID: MSS/84/047)

The National Maritime Museum holds within its collections a relic relating to HMS Hood, being a wooden named board from one of the Hoods boats (RMG ID: EQA0032) This item was previously on public display in the Sea Power Gallery which has now been redeveloped, subsequently EQA0032 is now in storage.