Throughout 2014 Royal Museums Greenwich will be celebrating the 300th anniversary of the 1714 Longitude Act, with a series of exhibitions, publications and events exploring human efforts to determine their position and navigate their way around the globe.

As well as being part of a fascinating historical and scientific story the Longitude Act is still highly relevant today: intended to encourage technological solutions to the problem of determining east-west position at sea, the 1714 Act is the direct ancestor of today’s science and technology prizes, such as the Google Lunar XPrize (featured in our current planetarium show Back to the Moon for Good) and the recently announced 2014 Longitude Prize, while with satellite navigation now a standard feature on cars and smartphones the modern world has never been so navigationally-enabled (or dependent).

Down at the National Maritime Museum Ships, Clocks & Stars: the Quest for Longitude (opening 11 July) will tell the story of the Board of Longitude, showing how the longitude problem was finally solved at the end of the 18th century by the development of John Harrison’s famous ‘sea watch’ and the Royal Observatory’s Nautical Almanac (still produced today by HM Nautical Almanac Office). At the Queen's House from 7 August The Art & Science of Exploration, 1768-80 showcases the artistic legacy of Captain Cook's three voyages, which were instrumental in testing this new navigational technology.

From Stars to Satellites

Meanwhile, here at the Royal Observatory itself the celebrations have already begun. Founded by King Charles II in 1675, with a mission to use the Sun, Moon and stars to “to find out the so much desired Longitude of Places”, the Observatory has a venerable place in the history of navigation and the quest to determine longitude. The exhibition Stars to Satellites brings this history bang up to date, telling the story of the development of satellite navigation from the seeds of the idea in Edward Everett Hale’s 1869 science fiction story The Brick Moon to the launch of the European Space Agency’s brand new Sat-Nav system Galileo. 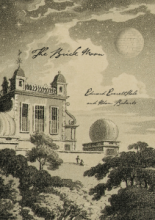 Cover of The Brick Moon (illustrated by Gary Northfield, based on a nineteenth century aquatint by J. Baker in the Museum's collection).

To celebrate this history the Royal Observatory has teamed up with publishers Jurassic London to reissue The Brick Moon in a handsome new edition alongside a modern sequel, Another Brick in the Moon, specially written by award-winning author Adam Roberts. The volume also contains a new introduction by Royal Observatory staff and a cover by local artist Gary Northfield (which cleverly incorporates a nineteenth century aquatint of the Royal Observatory). 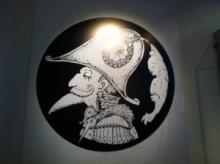 'The Commodore' - illustration by Robert Rankin.

Set in a parallel 18th-century world of time-travelling airships and extravagant astronomically-inspired wigs, Longitude Punk’d tells the tongue-in-cheek story of the Ancient Commodore and his quest to win the Longitude Prize with the help of his obliging kiwi birds. Best-selling author Robert Rankin provides the Commodore’s story (in verse!) while eight other UK steampunk artists have filled Sir Christopher Wren’s Flamsteed House with drawings, dresses, jewellery, dioramas and a host of bizarre gadgets all purporting to solve the problem of finding longitude at sea. 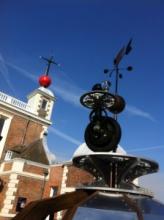 Part of the 'Globe of Dislocation' by Yomi 'The Alchemist' Ayeni & Wyn 'Citizen Griffdawg' Griffiths.

Outside in the Meridian Courtyard visitors can interact with the ‘Globe of Dislocation’ – a curious piece of Steampunk tech allegedly used (in the Punk’d timeline at least) by Astronomer Royal Nevil Maskelyne as part of an abortive longitude experiment. Other historical figures, such as John Harrison and Captain James Cook, also appear alongside real paintings and objects from the Museum’s collections (all with their labels rewritten to reflect their inclusion in this skewed parallel universe - keen-eyed visitors should look out for the world’s most unusual cheese-slicer and a cameo appearance by H.P. Lovecraft’s monstrous elder-god Cthulhu). Even if you’ve never heard of Steampunk before you probably already know what it looks like. Harking back to the steam-powered Victorian technology of Jules Verne and H. G. Wells, the steampunk genre began in the 1980s as a branch of science fiction literature championed by authors such as K. W. Jeter, James P. Blaylock and Tim Powers and fusing a modern fascination with technology and its effects on society with a love of the retro, brass-and-mahogany aesthetic of the nineteenth century’s Age of Steam. (For Longitude Punk’d we’ve asked our artists to push the boundaries of steampunk a little further back in time from its usual Victorian territory to include the clockwork and brocade of the eighteenth century and the Age of Enlightenment – a variant sometimes known as ‘clockpunk’.)

The look and ethos of Steampunk soon spread from the pages of novels into the real world, where communities like the Victorian Steampunk Society sprang up,  embracing retro gadgets, fashion, craftsmanship and old-fashioned manners, all with the aim of ‘making the world a little bit more splendid’. In much the same way that the Gothic Revival and PreRaphaelite movements repurposed a medieval aesthetic for the industrial nineteenth century, Steampunk takes aspects of Victorian style and technology and adapts them for a twenty-first century world. This influence can now be seen everywhere from Hollywood films to hipster fashion, and even the closing ceremony of the 2012 London Paralympics. 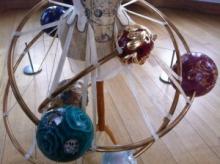 Longitude Punk'd  isn't the first time a Christopher Wren-designed building in Greenwich has had a Steampunk makeover. In The Golden Compass, the film version of Philip Pullman’s steampunk-ish novel Northern Lights, CGI was used to transform the Old Royal Naval College into the sky-scraping headquarters of the sinister ‘Magisterium’. It could even be argued that Steampunk itself owes a debt to the longitude problem. In 1822, in a paper to the Royal Astronomical Society, scientist and inventor Charles Babbage first proposed the idea of the ‘difference engine’ – a machine for automatically producing the astronomical tables required to calculate longitude, thereby eliminating sources of human error. Despite investment from the British government Babbage was never quite able to make his idea work in reality, although the prototype is now on display in London’s Science Museum and is widely recognised as the precursor to today's computer technology. As an example of  19th-century hi-tech Babbage's machine was the inspiration for one of the defining classics of the Steampunk genre: William Gibson and Bruce’s Sterling’s 1990 novel The Difference Engine. This ground-breaking work imagines what might have happened if Babbage had succeeded in building his mechanical computer, exploring the social and political consequences of a computerised Information Revolution in Victorian London.

Real or punk'd? Neither! - a modern replica of John Harrison's H1 timekeeper.

Of course, science fiction has a long track record of encouraging thought and discussion about the impact of scientific and technological advances - even, as in The Brick Moon, when the science and technology it depicts are wildly improbable. As a branch of science fiction that looks to the past, steampunk provokes a similar debate about history too. One thing that became plain during the planning for Longitude Punk'd was that the artists involved in the exhibition are passionate about both science and history. They know their stuff and, for them, playing with the past is a way of showing how it is still powerfully relevant to us today. By encouraging visitors to think about what’s real and what isn’t Longitude Punk’d reminds us that the interpretation of history is not always straightforward. Hopefully its playful take on the past will inspire visitors to learn the real story of navigation by visiting Ships, Clocks & Stars and Stars to Satellites, but with luck it will also help them to remember that history, like science, is a subject which enables us to see our own world in new ways. Stars to Satellites runs until 31 August 2014 and Longitude Punk'd until 4 January 2015. There will be a late opening of Longitude Punk'd on 17 July with entertainments and a Steampunk dress code. The Brick Moon is available from the Royal Observatory shop for £6.99 and the Peter Harrison Planetarium will be screening a monthly series of Steampunk movies including First Men in the Moon (29 May,  The Extraordinary Adventures of Adèle Blanc-Sec (26 June), The Adventures of Baron Munchausen (31 July) & The City of Lost Children (28 August). Full details of the Museum's Longitude Season can be found here (#WhereOnEarth).