Skip to main content
You are here:
Home Explore by theme Museum blog The rarest of phenomena: A total eclipse of the Sun

The rarest of phenomena: A total eclipse of the Sun

On the 21st August this year, the rarest of cosmic events, a total eclipse of the Sun, will cast a shadow across the USA.  In celebration, the Royal Institution is playing host to Professor Frank Close for an evening lecture (Tuesday 25 July, 7-8.30pm) where he will describe why eclipses happen, their role in history and myth and reveal the spellbinding allure of this most beautiful natural phenomenon.  We are pleased to offer a discount of 25% for members of the Royal Observatory off the £14 ticket price when booking here

Here, Charlotte New, Curator of Collections at the Royal Institution delves into the fascinating past of public lectures at the RI, around this rarest of natural phenomena.

If you happen to find yourself in the USA on the 21st August you will be able to witness an event which rarely takes place, the best cosmic spectacle for nearly a century will race across the entire central belt for the first time since June 1918, a total eclipse of the sun. A total eclipse of the sun occurs only when the moon completely blocks the visible solar disk casting a shadow on the Earth. This can only occur when the moon is precisely aligned between the Earth and the Sun, hence it is rare indeed.

But our lecture later this month is not the first time in the RI’s history that we have discussed such a wondrous event. Many famous astronomers have presented their research to the public on the phenomenon of eclipse including George Biddell Airy, Alexander Herschel, Norman Lockyer, Sir William Christie, Hugh Newall, Aloysius Cortie and Arthur Eddington to name a few. However the first to present photographic images was Warren De La Rue in 1861.

Warren De La Rue (1815-1889) was an English pioneer in astronomical photography, the method by which nearly all modern astronomical observations are made today. He started as a wealthy Victorian amateur astronomer (his family ran the De La Rue Printing company which became even more successful under Warren and his invention of the envelope folding machine shown at the Great Exhibition 1851) but soon developed improvements to the figuring of mirrors and the construction of equatorial reflectors on observation equipment.  He followed that with development of the photoheliograph that established his position in the world of astronomical research. The photoheliograph is the world’s first instrument specifically constructed for photographing celestial objects and was made specifically for Kew observatory. The observatory was originally constructed in 1769 so King George III could observe the ‘Transit of Venus’ but by the early 1850s it was under the control of the British Association and focused on research into linking magnetic disturbances with sunspots. Under the guidance of Sir John Herschel, Warren De La Rue was commissioned with designing an instrument which could take daily photographs of the sun.

In July 1860 De La Rue directed an expedition to Spain to observe the next known total eclipse. The visible location of this eclipse made it possible for European astronomers to observe and record, with a view to facilitate the labours of future observers, scientific readings. With De La Rue’s Photoheliograph taken along for the ride it was also possible for the first time to photograph such a natural phenomenon.

Curious and paradoxical as it might at first appear, it is necessary to shut out the sun in order to see it; for example, said the speaker, look on this electric light, could anyone conjecture from its aspect what it is? One sees a brilliant centre surrounded by rays, but one cannot see the two charcoal points which are producing it; and if it were magnified and projected against a screen by means of lenses, although the ignited pointes would be rendered evident, still there are matters about them which would remain invisible. So it is with the sun; one can so reduce his light by means of dark glasses, or other contrivances, as to enable us to scrutinize by means of telescopes his photosphere; or we might project his image on to a screen, and thus examine it: but we should not see the sun that is the whole sun. His mottled surface, his bright markings, his dark spots would undoubtedly be thus shown; but we should fail to discern those curious appendages which were first observed a few years back on the occasion of a total eclipse. These so-called red flames, about the nature of which many conjectures have been made, are, as it now appears, true belongings of the sun, and are not subjective phenomena, produced, as some philosophers suppose, by a deflection or diffraction of the sun’s light in passing through the valleys on the moon’s profile.

Extract from the Proceedings of the Royal Institution Volume III, 3rd May 1861

De La Rue’s strong connection with the Royal Institution, having joined as a member in 1851, recommended for membership by Michael Faraday (and later becoming Institution Secretary in 1879), made it a natural place for a lecture on his recent trip to be undertaken however on this occasion it was not given by him personally but by Faraday. On 3rd May 1861 Faraday delivered ‘On Mr Warren De La Rue’s Photographic Eclipse Results’. The write up indicates that the lecture was filled with practical demonstrations of the wondrous images captured of the eclipse as it went through all stages of its cycle. Over 31 photographs were taken in the three minutes the event could be seen from Spain, and the most important of these were shown to the packed audience projected through a magic lantern in the darkened lecture theatre.

Faraday continued the lecture with scientific accounts of what the observations and images had discovered about the sun and our planetary system and what future observations might also shed light on.

Modern science places at our disposal methods of determining the nature of some of the constituents of the sun’s atmosphere, with a degree of certainty equal, perhaps, to any of our laboratory methods, could we bring away a sample and analyse it by chemical means. Employing the principles and methods of Bunsen and Kirchhoff…, we might on the occasion of another solar eclipse give some answers to this question, and add another proof of the reality of these prominences by revealing something as to the nature of their constituent particles.

Faraday ended the lecture with showing some private images from De La Rue which he had taken of the moon from his own observatory. This was purely to highlight the ‘beauty and perfection’ of the photographs and how they illustrate the light and shadow on the moon’s surface. 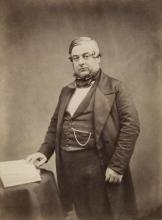 The Royal Institution is lucky to possess still within its collections a number of De La Rue’s original full and quarter plate photographs and negatives of his moon and sun observations taken between 1959 and 1861 including the eclipse.

While for most people, a solar eclipse can be a once-in-a-lifetime sight, it is clear that these phenomena can still reveal a wealth of information about the universe. Modern technology allows for better and clearer images to be taken and further scientific advances to be made. The thrill of understanding these rare events is still the same as in 1861.

Charlotte New is Curator of Collections at the Royal Institution

Eclipse: Journeys to the dark side of the Moon, at the Royal Institution, Tuesday 25 July, 7-8.30pm.