Time Ball out of service

Due to adverse weather conditions the Royal Observatory’s Time Ball will not operate this weekend.

In the last couple of blog entries, I have looked at some fascinating objects from the Museum’s collection, using the categories of the Insight Astronomy Photographer of the Year competition as a guide. Prompted by the solar eclipse, I am tackling two (new) categories at once, the Moon and the Sun, mankind’s most familiar celestial objects.

A solar eclipse is a natural phenomenon that occurs when the Moon passes between the Sun and Earth, partially or fully occulting the Sun. They are observed the world over, and there are even eclipse chasers, or umbraphiles, who travel to remote locations to witness these astronomical events. Eclipses have indeed long been a subject of fascination. They've inspired research and, as my colleague Tom Kerss explains in this video, the Royal Observatory Greenwich has a long history of studying eclipses from the time of the first Astronomer Royal, John Flamsteed. They've even been the inspiration for chart-topping pop songs! They have also inspired ceremonies, as can be seen in this beautiful 19th century lithograph which illustrates the observation of an eclipse by Chinese astronomers and officials:

The Ceremonies Observed in Every Province & City of China, on the Occasion of an Eclipse, drawn by GF Sargent after Poshang, lithograph by JW Giles, 1847, ZBA4563.

Early on, the printed medium was used to disseminate knowledge and understanding of eclipses. Published in the Universal Magazine in 1748, a view of London includes diagrams providing an indication of "The Eclipse of the Sun as it will appear at London on July 14 1748" and of the motion of the Earth around the Sun.

The Cause of Eclipses and the Motion of the Earth Delineated, by Joseph Walker, 1748, PAJ3505.

In the 19th century, there was a real drive to bring popular science knowledge to an ever wider public. James Reynolds published a series of Astronomical Diagrams, produced as visual aids, to enable learning in the home. 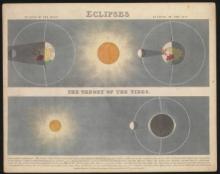 On this print, both solar and lunar eclipses are explained, as well as how the moon affects the tides. Such prints are not only effective educational tools thanks to their clear, legible design and clear explanatory texts, they are also beautiful objects in their own right. Another diagram from the series shows the phases of the moon, as seen from the Earth, and the orbits of the Moon and Earth around the Sun. 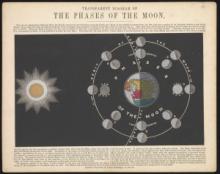 This diagram has holes in the card to indicate the lit portions of the Moon during its cycle. These are backed with tissue paper so that the print can be held up to the light to show the Moon's phases as light against a darker background.

In my previous blog post, I wrote that artists could have a significant role in recording astronomical observations.  The Royal Academician John Russell (1745-1806) was one of the eighteenth century’s leading pastel portraitists, as well as a keen amateur astronomer. This lifelong interest  was not only scientific but artistic for, 'stricken by the beauty of the Moon', he spent thirty years and sleepless nights producing detailed drawings of the moon. These  eventually resulted in a series of printed maps of the Moon, or 'Lunar Planispheres', which Russell dedicated to the astronomers Nevil Maskelyne and William Herschel (both of whom he portrayed).  Russell also invented the 'Selenographia' (1797), which, consisting of a large lunar sphere and a small terrestrial sphere, reproduced the motions, of the Moon with respect to the Earth.

While Russell’s maps are spectacular in their detail, they relied on the accuracy of the telescopes of the time, and as technology evolved, so did our knowledge of the relief of the Moon. The most detailed lunar chart produced before the space age is Hugh Percival Wilkins' 300 inch Map of the Moon, from 1952, which is comprised of twenty seven sheets. Among my favourite objects in the Museum’s collection are a group of nine wall hangings, on astronomical themes, produced by the Working Men’s Educational Union in the 18505.

Founded in 1853, the Working Men's Educational Union was a philanthropic society with the object of “the elevation of the working classes, as regards their physical, intellectual, moral, and religious condition”. Their chief means of achieving this was to encourage popular literary and scientific lectures “by preparing suitable Diagrams and other aids to lecturers”, such as wall hangings. This particular one shows the magnified appearance of the moon, as seen through a telescope. (A similar representation of the telescopic appearance of the moon, with explanatory card, can be found in Reynolds’ astronomical series). Another wall hanging depicts the sun, including some sunspots.

Along the bottom are represented the known planets, up to Neptune (discovered in 1846), indicating their relative size and initial letter. The wall hangings were made from lithographic images printed onto cotton (possibly to avoid paper duty), and it seems that the main image of the sun and its sunspots relies on the same observation as that in this print from Reynolds’ astronomical diagrams series: 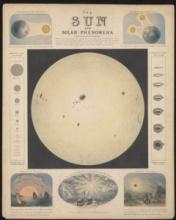 The print also shows, in smaller vignettes, the relationship of the Sun and Earth at various times of the day and the year, as well as other solar phenomena: a Transit of Mercury, The Sun at Midnight at the North Cape of Europe and an Annual Eclipse. To the left are shown the comparative size of the planets as seen from the Sun, and, to the right, the changing appearance of sunspots on different parts of its disc.  As Reynolds’ diagrams were not used in lectures but destined to self-learning, the captions and introductory texts, providing further information, were crucial to the comprehension of these images. With the development of photographic technology, and ever more powerful and accurate telescopes, our understanding of the sun’s nature, composition and activity has grown exponentially. And so has the range of awe-inspiring images, as the extraordinarily beautiful, winning picture of last year’s Our Solar System category, can show you. Shop
Tides & The Moon Greetings Card
Taken from a 19th century print from our archive. This greetings card shows...

Shop
Phases of the Moon A3 Print
Taken from a 19th century print from our archive. This stylish print shows...

Interesting facts about the Moon