Skip to main content
You are here:
Home Discover our stories and collections Museum blog It all started with a rumour...the founding of the Royal Observatory

It all started with a rumour...the founding of the Royal Observatory

Discover the story of the founding of our Observatory, Britain's first state-funded scientific research institution.

If you'd stood here on the hill in Greenwich Park on 10 August 1675 you would have seen an important event. At 3.14pm the first Astronomer Royal John Flamsteed laid the foundation stone of the new Royal Observatory, Britain’s first state-funded scientific research institution. Events had moved quickly after the initial visit by the French astronomer, Sieur de St. Pierre in December 1674. Thanks to Charles II’s French mistress, Louise de Kéroualle, rumours started to circulate at court that St. Pierre had devised a means of determining longitude at sea by using observations of the Moon’s position in relation to the background stars. Improving navigation at sea was a major challenge for 17th century merchants and their sailors who undertook long voyages across the globe to bring back precious cargoes of tea, spices, timber, porcelain and textiles. While the French astronomer’s claims were rejected by a committee of English scholars in February 1675, the emergence of this idea highlighted the need for something to be done to address this challenge which offered many lucrative financial and political benefits. On 4 March 1675, the King signed a Royal Warrant appointing Flamsteed as 'astronomical observator..[..]..so as to find out the so much-desired longitude of places for the perfecting the art of navigation'.

The race to map the stars had begun and Flamsteed wasted no time: he started by recording observations made from the north-east turret of the White Tower within the Tower of London. In the meantime, the architect Christopher Wren and his assistant Robert Hooke began to draw up plans for the new observatory. Initially, the Royal Society had planned to establish an observatory within the grounds of Chelsea College but once the new royal version had been announced, the scheme was abandoned and the King declared that the new observatory should be built within Greenwich Park ‘upon the highest ground at or near the place where the castle stood, with lodging for our astronomical observator’. The hilltop location in the park offered many advantages with good views of the skies in a fairly rural location away from the smog and dirt of the city but still accessible by river. Wren drew up plans for an elegant building to be constructed on the remaining foundations of Greenwich Castle, a former hunting lodge. The building featured a series of rooms for living accommodation topped by a large octagonal room designed for observations and ‘a little for pompe’.

View from One Tree Hill: The Queen's House and the Royal Observatory, Greenwich, by John Griffier, late 17th century (BHC1817)

As the work progressed, Flamsteed moved from the Tower to the Queen’s House at the foot of the hill where he could see the new building take shape. Flamsteed also cast a horoscope for the best date for the construction of the observatory, perhaps as a way of emulating the Danish astronomer Tycho Brahe who had done the same for his own observatory, Uraniborg, in 1576. Flamsteed was familiar with the calculations required for astrology but by this time, astrology was no longer regarded as an essential skill for any courtly scholar but was associated with superstition and quackery. In particular, Flamsteed was reluctant to be associated with the subject which was contentious among certain religious and political groups in England in the post-Civil War era. 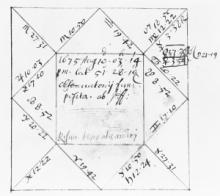 Flamsteed's horoscope for the founding of the Observatory (B0659)

After a relatively smooth build, Flamsteed moved in to the observatory on 10 July 1676 along with his two servants and the observations began in earnest. During the course of the next forty years, Flamsteed lived within the dwelling house which would later bear his name and he made over 50,000 observations of the moon and stars from a nearby building. This immense amount of data was later reduced and compiled by Flamsteed’s wife and assistants into the Historia Coelestis Britannicae (1725) which became the standard star catalogue by astronomers for the next century.

Special
Home of time
Find out how the Royal Observatory became the home of Greenwich Mean Time ...

Special
A Day Out in Greenwich
Our handy guide to the best way to explore Greenwich. You will need: a...