Here in the Caird Library and Archive we are often asked about Royal Naval records relating either to specific individuals, events or ships. Most of the surviving records generated by the Navy during its long history are held by the National Archives at Kew. One set of records we hold on deposit here at Greenwich however are logs written by Royal Naval Lieutenants during the period of 1673-1809.

The collection consists of 5205 volumes which can be found under references beginning ADM/L on our Archive Catalogue. Lieutenants were required by the Admiralty to submit their log books to the Navy Office in order to receive their pay. The logs were then bound into volumes arranged by ship’s name, or in some cases several ships whose names began with the same letter, and this is how they can be found on our catalogue today.

At this time Lieutenant was the basic commissioned rank in the Navy. Following reforms by Samuel Pepys each man had to have a certain amount of experience at sea and to pass an examination in seamanship in order to qualify for it. For much of this period this requirement was set at six years and the candidate should have been at least 19 years of age, although in practice some were younger.

There would usually be between one and eight Lieutenants on board a ship in this period, depending upon its size and they would then be ranked by seniority. Their main duty would be keeping the watch during which time they were expected to be on deck at all times and would be responsible for the safety and readiness of the ship, calling on the Captain only if necessary. In battle First Lieutenants would remain with the Captain ready to assist him as needed while each of the remaining Lieutenants would usually be responsible for a section of the ship’s guns and ensuring the crew did their duty. On some occasions Lieutenants were also given command of smaller vessels.

Within each volume the individual logs are usually prefaced with a certificate from the Admiralty that the log had been delivered to them. This is often accompanied by a letter from the Captain of the ship in which the Lieutenant had served certifying that he had served in the stated role and complied with the regulations throughout the voyage covered by the log. 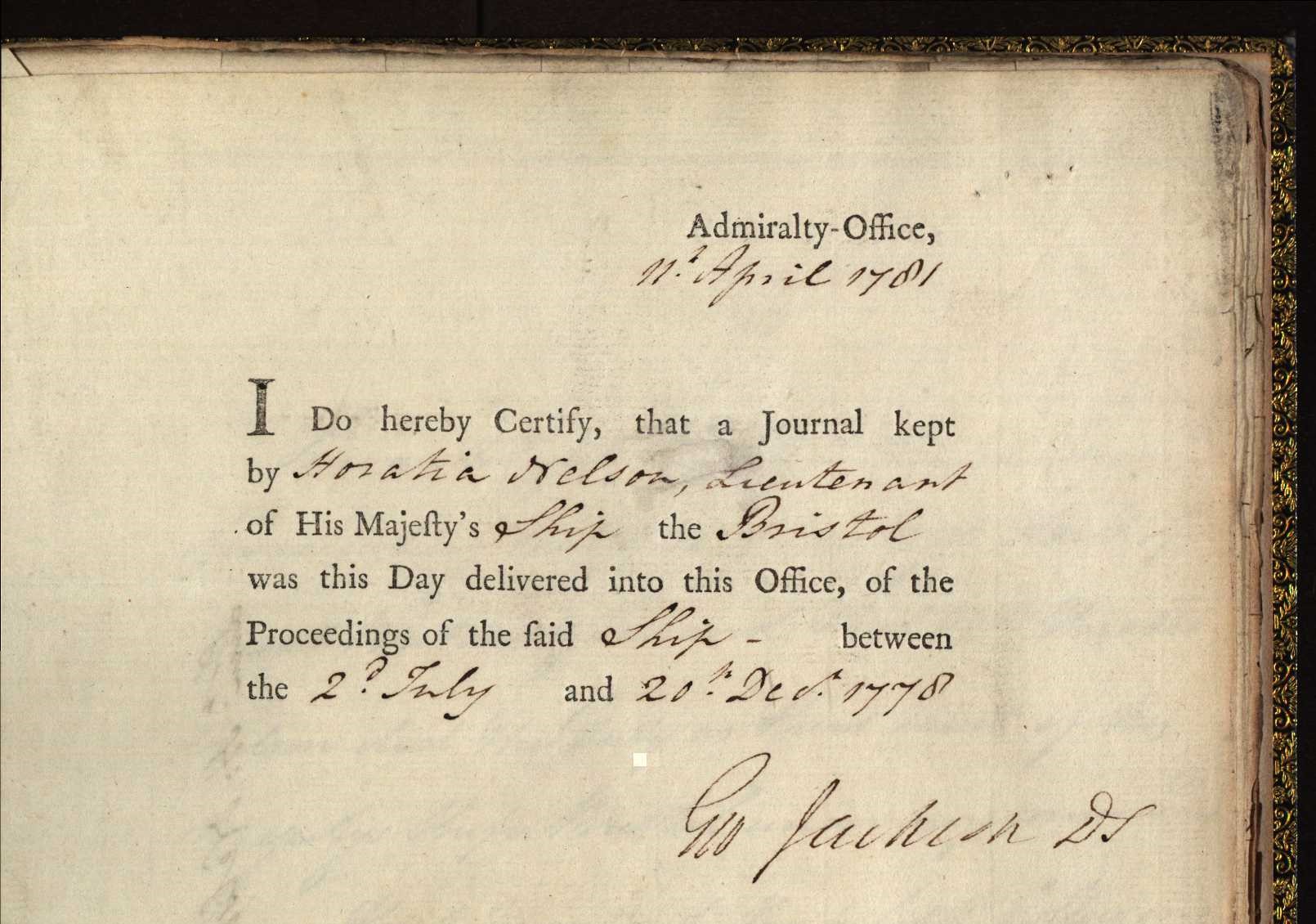 The logs are not a private journal and mainly record details the officers were required to note such as the weather, points of navigation and the daily routine of the ship. The following log entry written by Lieutenant Horatio Nelson on His Majesty’s Ship Bristol between 25 July and 3 August 1778 lists some typical details or activities that would be recorded. These include the weather, the ship’s bearings, the crew working to repair areas of sails and rigging, ‘exercising great guns and small arms’ and washing the sick berth with vinegar. 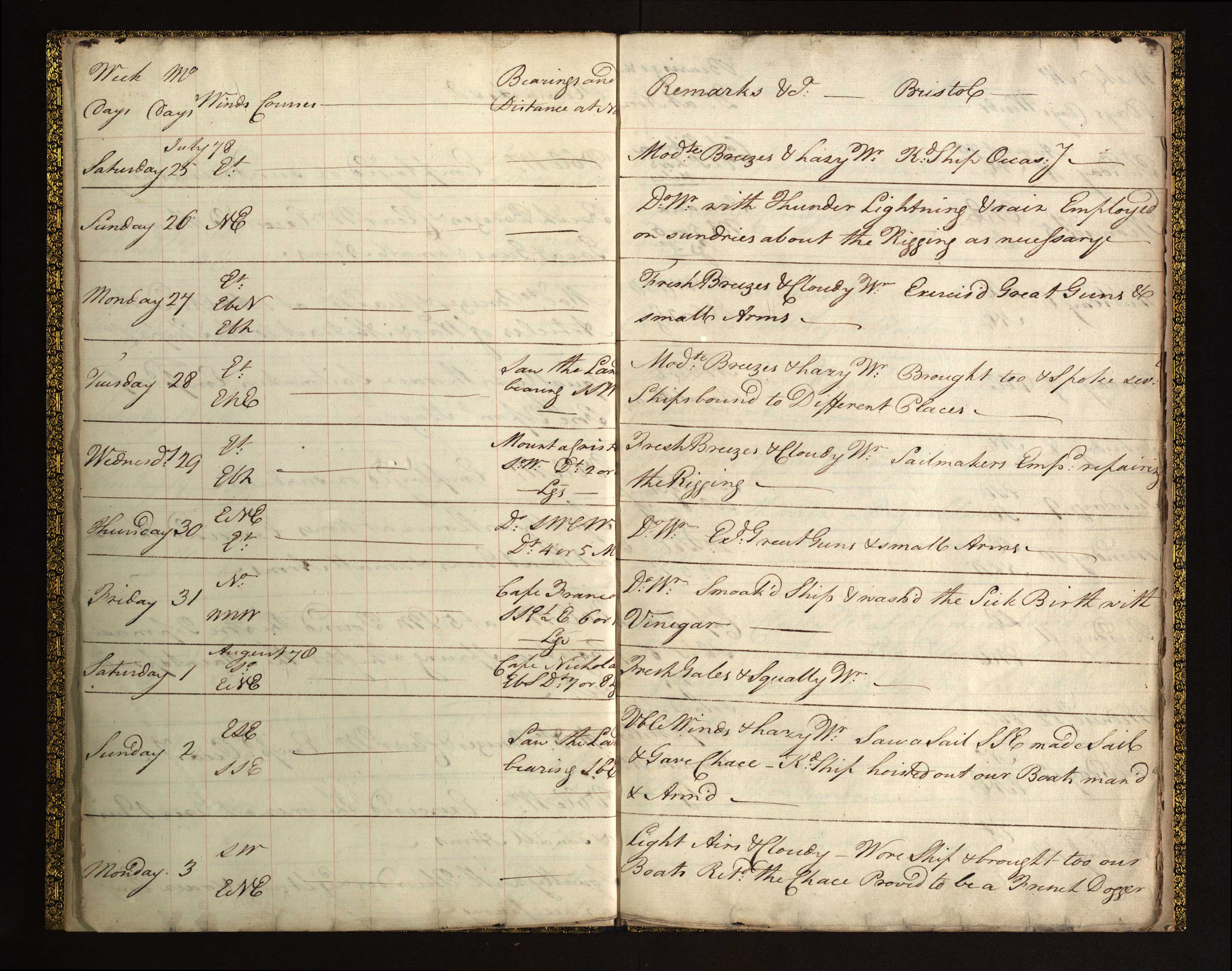 Caird Library readers make use of the logs for a variety of reasons, whether researching the individual who wrote the log, the vessel on which they were serving or events in which they may have been involved. The log can provide information on where a vessel was located on a particular date and based on their sightings what other ships may have been in the area.

As the weather was recorded with such regularity the logs have also been used by researchers investigating climate change resulting in the creation of the Climatological Database for the World’s Oceans 1750-1850 (CLIWOC).

If significant or unusual events occurred during a voyage then references to these may also be found in the logs. For example the log of Lieutenant Robert Maynard of His Majesty’s Ship Pearl in which he recorded the events leading to the death of the infamous pirate Blackbeard

In some cases entries for these events are longer and more descriptive as can be seen in the following account of the Battle of Trafalgar by the Captain of His Majesty’s Ship Colossus, James Nicoll Morris. Captain’s logs such as this occasionally appear in these volumes but are usually duplicates of those held by the National Archives: 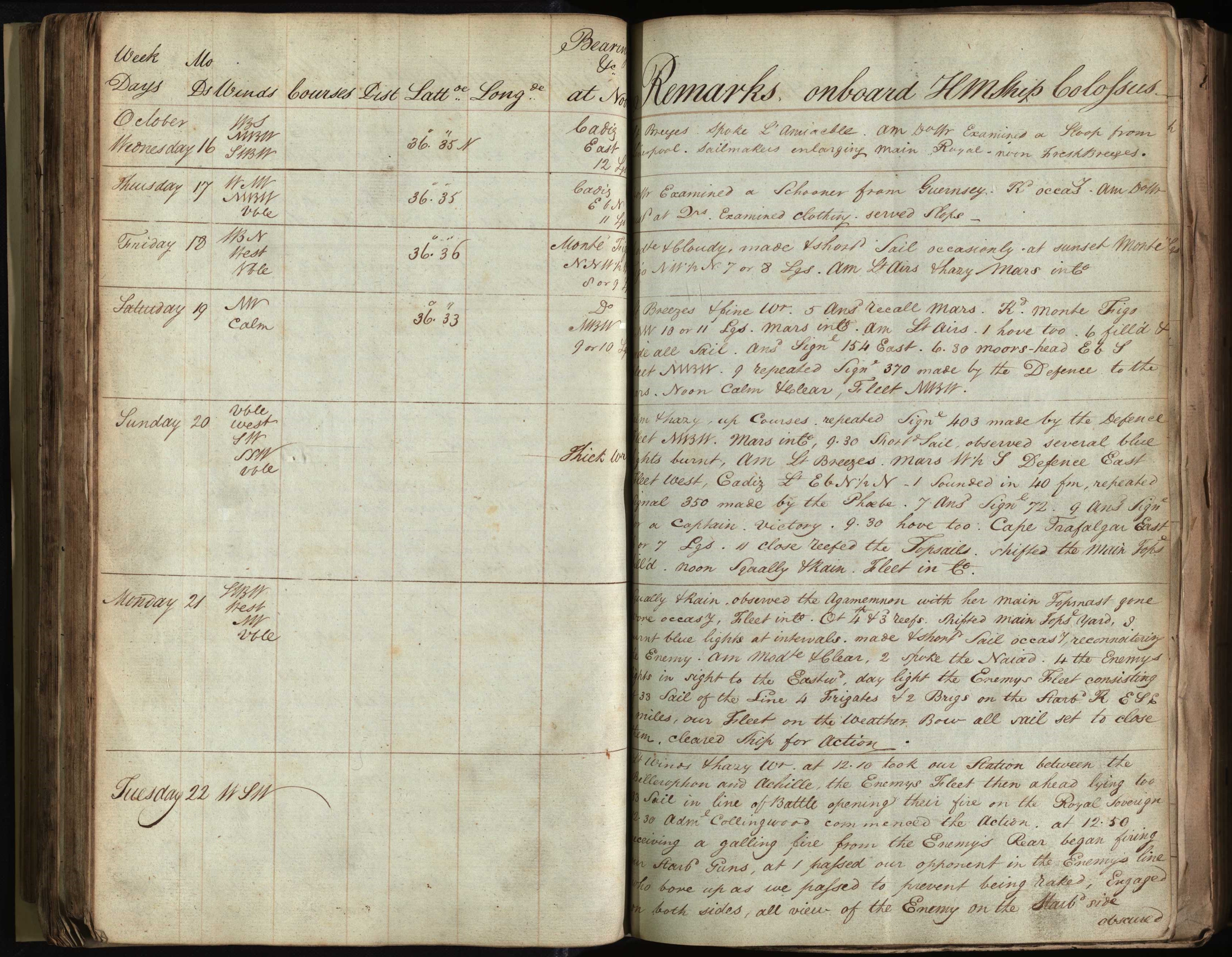 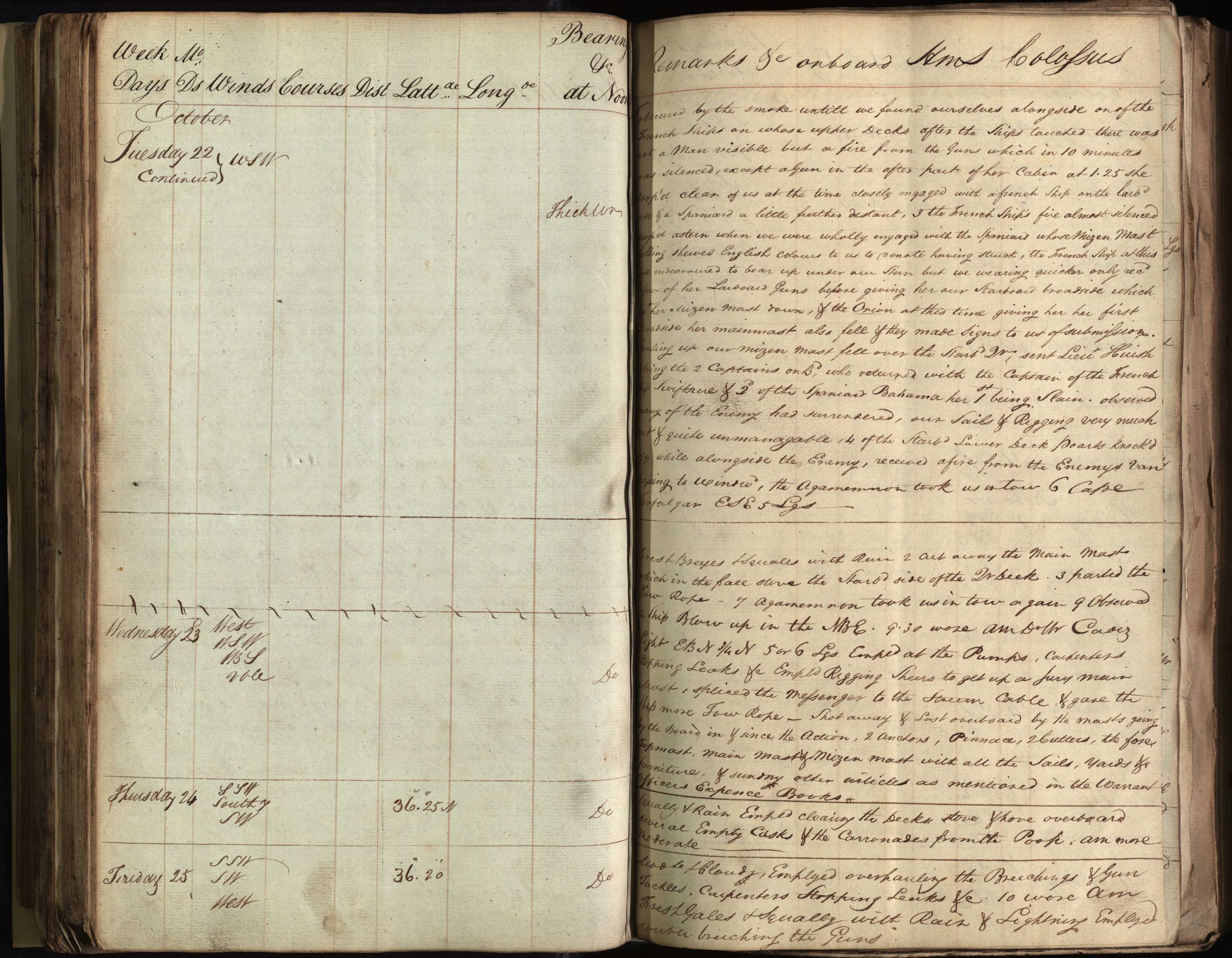 Life at a Prisoner of War Camp