Skip to main content
You are here:
Home Discover our stories and collections Museum blog In praise of Thomas Cooke, Yorkshire telescope-maker

In the last few weeks I've been asked about Thomas Cooke (1807-1868) and whether he should be commemorated in some way. Each time my answer has been a resounding yes. Although he's not well known today, his is an inspiring story.

Born in Allerthorpe in the East Riding of Yorkshire, Thomas was the son of a shoemaker. Then in his youth he became inspired by tales of Captain James Cook (no relation) and resolved to go to sea by teaching himself mathematics and navigation. It is said, however, that his mother's tears over the dangers she foresaw caused him to change his mind and turn his attention to optics and making telescopes. This was something he became very good at. After setting set up a firm in York, he gained a worldwide reputation for the quality of his refracting telescopes (which use lenses to gather light). 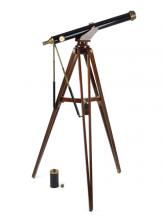 As well as winning prizes at international exhibitions, Cooke's telescopes also proved their worth in astronomy. His work included the mount for a telescope William Huggins used for ground-breaking work in spectroscopy, the telescope Norman Lockyer used for work in the same field, and what became the largest telescope in the world (for a short while) - the Newall telescope. This had a main lens of 25 inches in diameter and was made for Robert Newall, a rich industrialist with a private observatory at Ferndean near Gateshead. Sadly, the weather there was too poor for good observing, and the telescope went to Cambridge University's observatory after Newall's death. Then in the 1950s it travelled to the Greek National Observatory in Athens, where it is still in operation.

In his lifetime, Thomas Cooke helped to bring Britain back to the forefront in optical manufacturing, an area in which German and French firms had begun to take over. His firm built telescopes of outstanding quality that were used in many professional and private observatories and which underpinned important astronomical work. His contribution to Victorian science is certainly worthy celebrating.

Shop
Planetary System
This coloured lithograph presents an image of the solar system, to Uranus....