Skip to main content
You are here:
Home Discover our stories and collections Museum blog Tonkin’s Diving Machine and the wreck of the Earl of Abergavenny

Harriet Braine takes a closer look at a quirky 19th-century print and a not entirely successful salvage operation using the latest diving technology.

We're working with an amazing team of volunteers to help digitise our collection of Ship's Portraits. For more info, read our previous blog 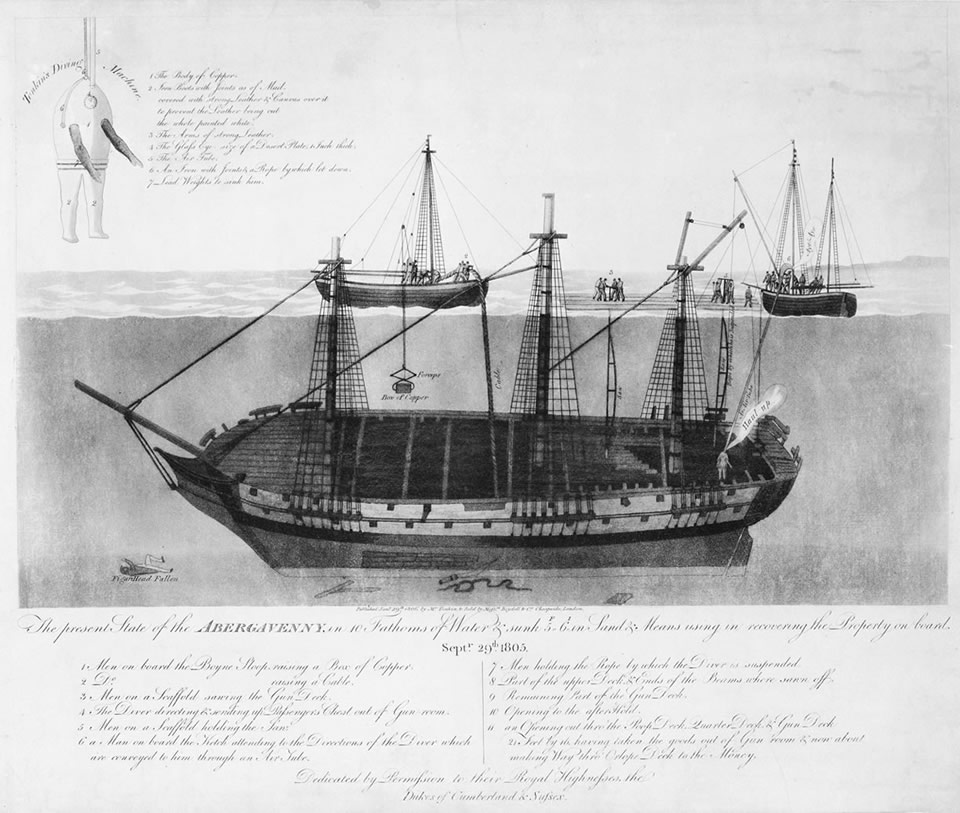 This print really stands out as wonderfully odd – we are given a view of both under and over the surface of the sea, a charmingly naïve drawing style, lots of intriguing information about the events depicted in an 11-point key, and even speech bubbles.

However, the events behind the image are not at all comic. The wreck of the Earl of Abergavenny at the start of its fifth voyage outside Weymouth Harbour in shallow water due to a series of errors and bad weather resulted in a catastrophic loss of 272 lives, including that of Captain John Wordsworth, brother of poet William. The Wordsworth family had financed the voyage in the hopes of providing William with means to devote his life to poetry.

The salvage operation, first contracted to a man named Mr Tonkin (who designed and published the print) took place in 1805 in the few months after the sinking, and the latest in marine excavation tech was employed. The ship is described as being “in 10 fathoms of water & sunk 5’ 6’’ in sand”, and the key describes the activities of the salvage team:

“Men on board the Boyne Sloop raising a box of copper” join other men perched on rafts or “scaffolds” who operate long, unwieldy saws to blindly break apart the wreck to aid the diver in accessing the cargo. The diver, suspended from a rope, communicates with the Ketch, another salvage vessel, through an “air tube”, shouting “Haul Up!”. The diver has managed to access the gun room, and, we are told, is “now about making way thro’ orlope deck to the money”.

The image of Tonkin’s Diving Machine is in the top corner, and has its own key:

"1. The body of coppers. 2. Iron boots with joints of mail, covered with strong leather and canvas over it to prevent the leather being cut, the whole painted white. 3. The arms of strong leather. 4. The glass eye, size of a dessert plate 1 inch thick. 5. The air tube. 6. An iron with joints and rope by which let down. 7. Lead weights to sink him."

The idea of being underwater in a suit made of metal and leather next to a giant saw… pretty terrifying.

Tonkin in fact failed in his salvage operation as he and his team were defeated by the huge thickness of the beams – this ship was one of the largest East Indiamen ever made. He retrieved a few minor items from the wreck, some of which came up at a public sale in Weymouth that listed items such as anchors, planks, cables and spars.

According to historian Tymn Lintell, a new salvage contract was speedily awarded to John Braithwaite who, in the September of 1805, sailed from Blackwall, London, in his vessel Endeavour, the Log of which has survived to this day. Over two years of explosions and explorations he recovered all manner of items by removing the ships deck beams which had beaten Mr Tonkin, using large charges of gunpowder; these items included all the silver dollars which were found in 62 chests. He continued to salvage until, to use his own words, "The cargo got so thin that it was not worth bringing up".

It is also interesting that 'diving machines' seem to have been common enough for use in satirical caricatures, although this one has no helmet… or air tube… but it’s a cartoon about beer tax so it probably would only have bothered professionals like Tonkin.

'A Diving Machine on a New Construction' by Thomas Rowlandson

Shop
Weymouth Lady Martin Parr Greetings Card
A stunning photograph taken by Martin Parr has been turned into a wonderful...

Shop
Weymouth Martin Parr Greetings Card
A stunning photograph taken by Martin Parr has been turned into a wonderful...