Skip to main content
You are here:
Home Discover our stories and collections Museum blog Writing at sea: from log to blog (1)

Artist and writer John Kelly delves into the fascinating history of the ship's log and the many experiences and discoveries it has recorded.

Over the millennia those who travel at sea or who live by it have produced records and accounts of their experiences. In The Seafarer, an anonymous poet of Anglo-Saxon England wrote:

“The winds rose, the waves dashed, the floods were fierce, the cordage creaked, the sails were soaked.” (A record of the experience of the apostle St Andrew)

Our present-day knowledge of the sea has come to us through many such entries, whether they were personal recollections, work of the imagination or more specifically an official 'log'.

In the 9th century St Brendan's Navigatio told of the southern shores of Iceland on a journey that would provide a working knowledge of the North Atlantic and a template for later writers on the subject of Hell and its punishment. The encounter with these volcanic lands formed the basis of preaching in the churches of the Medieval World.

"Looking back they saw that the smoke of the mountain had been replaced by the flames which shot up and sucked back, so that the whole mountain glowed like a pyre." (Navigatio, Chapter 24)

These early encounters are rendered in a precise language of the sea; they possess an urgency that places the reader in the boats that made their frequently perilous journeys. Like Scott's final notebooks, many would be made as a record and last testimony. The sea and the monsters depicted on the maps of the day may well consume them. In this aspect they are essential reading.

In the 16th century the voyages of discovery provided further instances of our understanding and appreciation of the forces of the sea. In 1578 Drake's voyage to the Southern Ocean described the great uncertainty of sea journeys:

“From the 7th September, in which the storm began till the 7th October, we could not by any means recover any land having been driven so far south as to the 57 degree and somewhat better. From the Bay of Parting of friends , we were forcibly driven back again into 55 degree towards the Pole Antarctic.” (Extract adapted from the log of Drake's voyage)

By 1730 the Admiralty identified the need for consistency in the keeping of logs and issued an order in their naval instruction of 1731:

“He (the Captain) is from the Time of his going on board to keep a journal according to the Form set down..., and to be careful to note therein all Occurences.”

Thus it was that a traditional use of a piece of timber trailing from the stern of the ship to record speed and direction would be supplemented by a readily available format in a daily written account. Whilst most log entries would appear systematic and brief even the naval vessels of the 18th and 19th century provide us with some interesting insights into life at sea.

In 1741 HMS Centurion formed part of Anson's circumnavigation and was experiencing heavy weather along the west coast of South America:

“Running away to northward with hopes of mending our weather as it was truly time. Most of our men so sick.”

And in 1804 HMS Temeraire was preparing for her journey to Trafalgar:

“AM moderate and clear, shipwrights and caulkers repairing damage and with light airs loosed sails to dry before mending.” 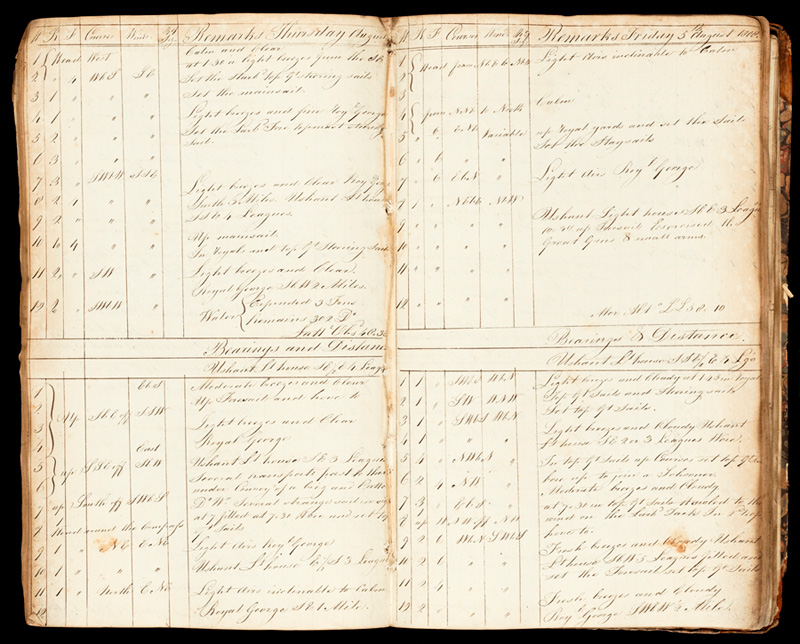 The 19th century saw a further evolution of the log, as the volume of shipping increased and a desire for more knowledge of the sea conditions was required in order to secure safe efficient sea voyages. In 1864 Captain Maury produced The Physical Geography of the Sea and its Meteorology. This publication marked a notable advancement in the science of the oceans, in which Maury described each ship as a laboratory of science keeping their logs and accumulating more details of the sea.

This post is a guest blog by artist and writer John Kelly. You can contact him by email.

In part 2, John Kelly will look at the contribution of the ship’s log to literature and the visual arts.

View logbooks in our Archive catalogue

Print
Estimator log and line
The log-reel, line, log-ship and sand-glass were used for determining a ship...

Fear, flames and engine failures - the logbooks of a...