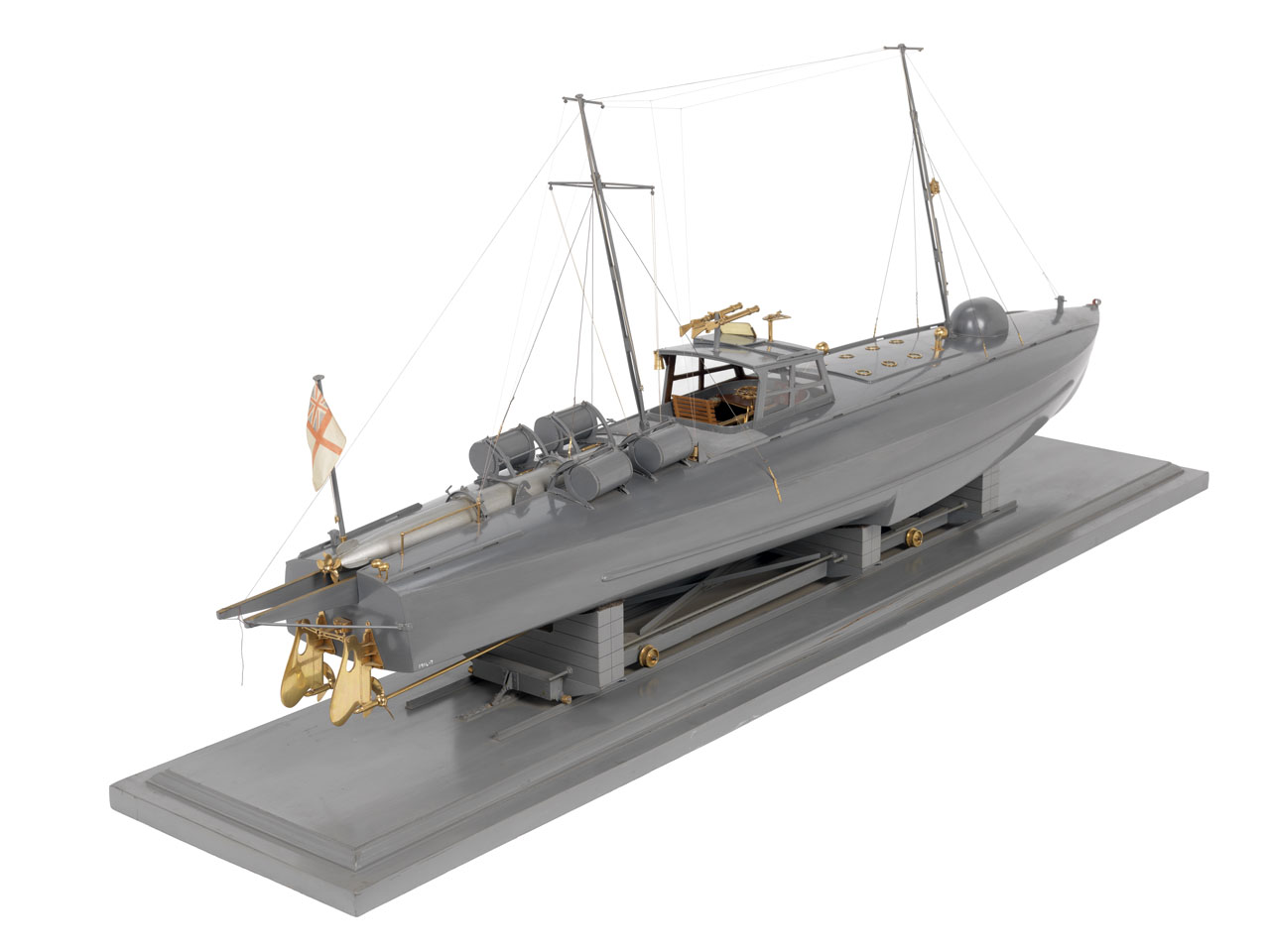 Scale: not calculated. A superb model of a 55-foot ‘coastal motor boat’ (CMB) (1917), built by a variety companies throughout the First World War. This model was made by John Thornycroft.

The early torpedo boats had relied on their small size, and relatively high speed, to get within range of the enemy, but by 1914 the effectiveness of the steam torpedo boat had been largely nullified by the development of the torpedo-boat destroyer, a much larger and more seaworthy warship. In 1917 the 55-foot CMB was developed to give greater range and the model shows an early version of this type on its launching trolley. They had a crew of between three and five and some were capable of a breathtaking 40 knots.

The boat is fitted with a trough housing an 18-inch torpedo. It had been necessary to develop an apparatus which, without the weight of a torpedo tube and without detracting from the boat’s sea-going qualities, would launch a torpedo at speed. The answer was found by mounting the torpedo, pointing forward, in a trough aft of the cockpit with a ram to launch it by pushing it out of the stern to run the course of the firing vessel, which was fast enough to get it out of the way.

A twin Lewis gun-mounting sits on top of the cockpit. The need for this anti-aircraft defence had been demonstrated when a force of the earlier CMBs was annihilated by German seaplanes. The metal device on the front of the cockpit roof is a torpedo director, for calculating deflection to allow for the enemy’s course and speed before firing. Four depth charges, introduced in 1917, were carried, and mines could be loaded instead of torpedoes.

These CMBs gave useful service operating out of Dover and the East Coast ports, but their most successful exploits came later in the Baltic, against the Bolsheviks in 1919. A large force of 55-foot CMBs sank the battleships ‘Petropavlosk’ and ‘Andrei Pervosvanni’ and a submarine depot ship in a single raid on Kronstadt Harbour.
Back to Search Results
Buy a print License an image
Share:
Link copied to your clipboard!