Skip to main content
You are here:
Home Discover our stories and collections Museum blog The arrival of the Bermuda floating dock, July 1869

I recently catalogued a small collection of papers relating to Rear-Admiral James Francis Ballard Wainwright (1820-1872), numbered ADL/Z/63 in the Archive Catalogue. Some of the items shed light on a notable event at Bermuda one hundred and fifty years ago.

Towards the end of his naval career, Wainwright was in command of the floating battery HMS Terror (1856) and also captain in charge of the dockyard, victualling yard and naval hospital at Bermuda. In 1869 he was responsible for making preparations for the arrival of the Bermuda floating dock (1868). At the time it was the largest vessel of its kind in the world. The sheer size of the structure, novel features in the design, and the complications involved in the delivery voyage generated much press interest.

Lieutenant-Colonel Andrew Clarke, Royal Engineers, director of works at the Admiralty, had chosen a floating dock for the repair of warships at Bermuda because it was impossible to operate a dry dock given the porous limestone of the local terrain. The dock was sufficient in size to accommodate the largest warships in the British fleet, had a u-shaped cross section and a self-careening ability. The latter feature meant that it could dramatically turn itself on its side for the purposes of maintenance, or the removal of marine growth. The launching took place at the Campbell, Johnstone & Co. shipyard at North Woolwich in September 1868 and the delivery voyage started from Sheerness in June 1869. 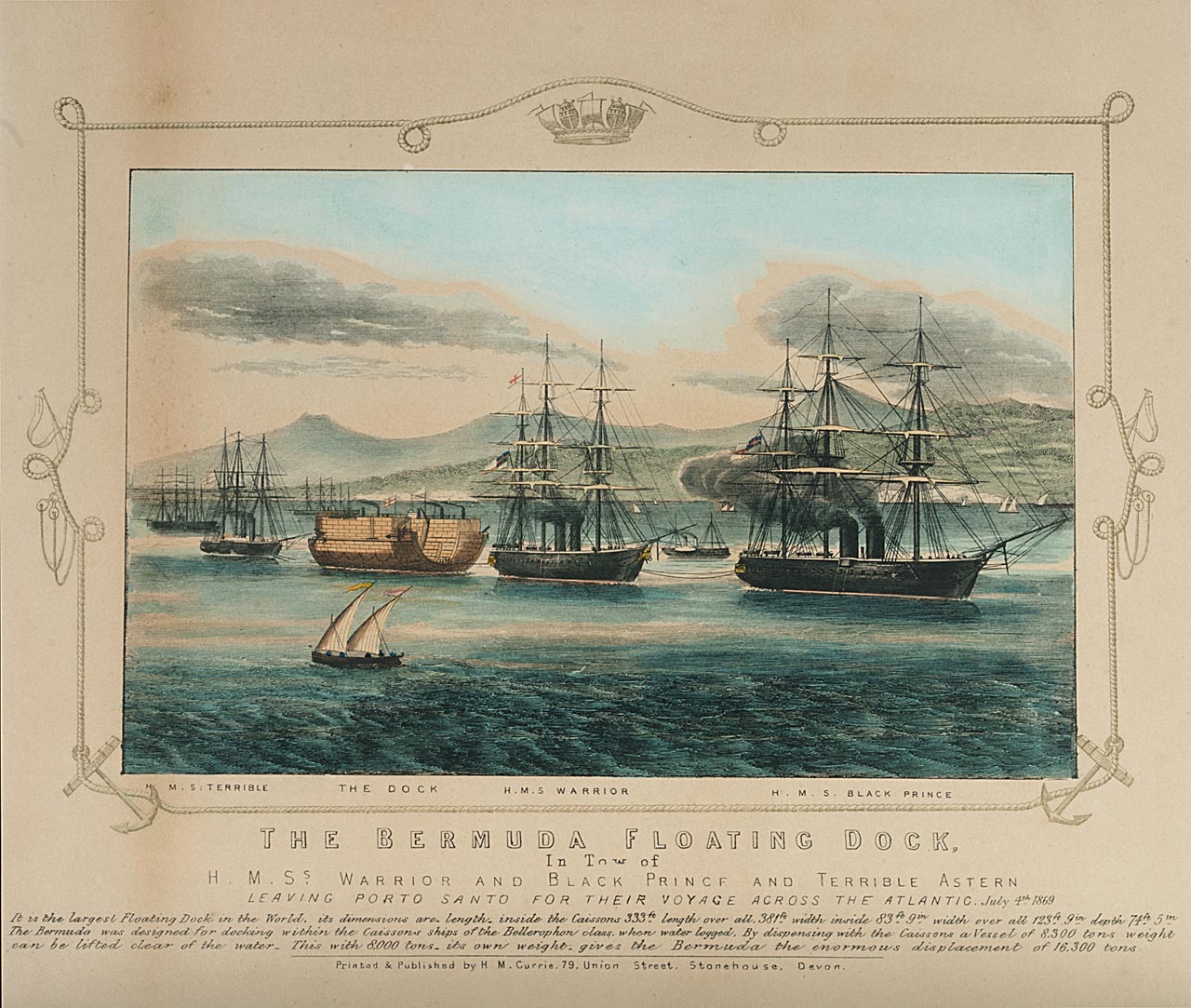 The above print in the National Maritime Museum collection numbered PAI8972 shows the start of the longest part of the delivery voyage. The dock was towed from Madeira across the Atlantic by the iron warships HMS Warrior (1860) and HMS Black Prince (1861), with the wooden paddle frigate HMS Terrible (1845) guiding from behind. The dock’s progress was assisted by the action of easterly winds on a sail erected between the side walls of the structure. On the approach to the naval anchorage at Ireland Island, the dock had to be carefully navigated through The Narrows, a channel between the reefs that surround Bermuda. This was undertaken by the Terrible, with the gunboats HMS Vixen (1865) and HMS Viper (1865) made fast to each quarter of the dock.

ADL/Z/63/3 includes extracts from a report made by Captain Henry Boys of the Warrior, describing delays encountered during the transfer of the dock through The Narrows at the end of July 1869. There were numerous incidents of towing hawsers being lost, but in essence the difficulty was in getting the dock under suitable control near the entrance to the channel. Then, due to the tidal restrictions, the attempt had to be postponed until the following day. During the second attempt, a sudden squall caused the dock to yaw at a dangerous point in the channel, but luckily the Terrible was able to get it into smoother water. On reaching Grassy Bay, the prepared moorings were unfortunately lost to the bottom and the dock had to be secured overnight with its own anchors. On 31 July 1869 valves were opened so that the dock could be left safely resting on the bottom. 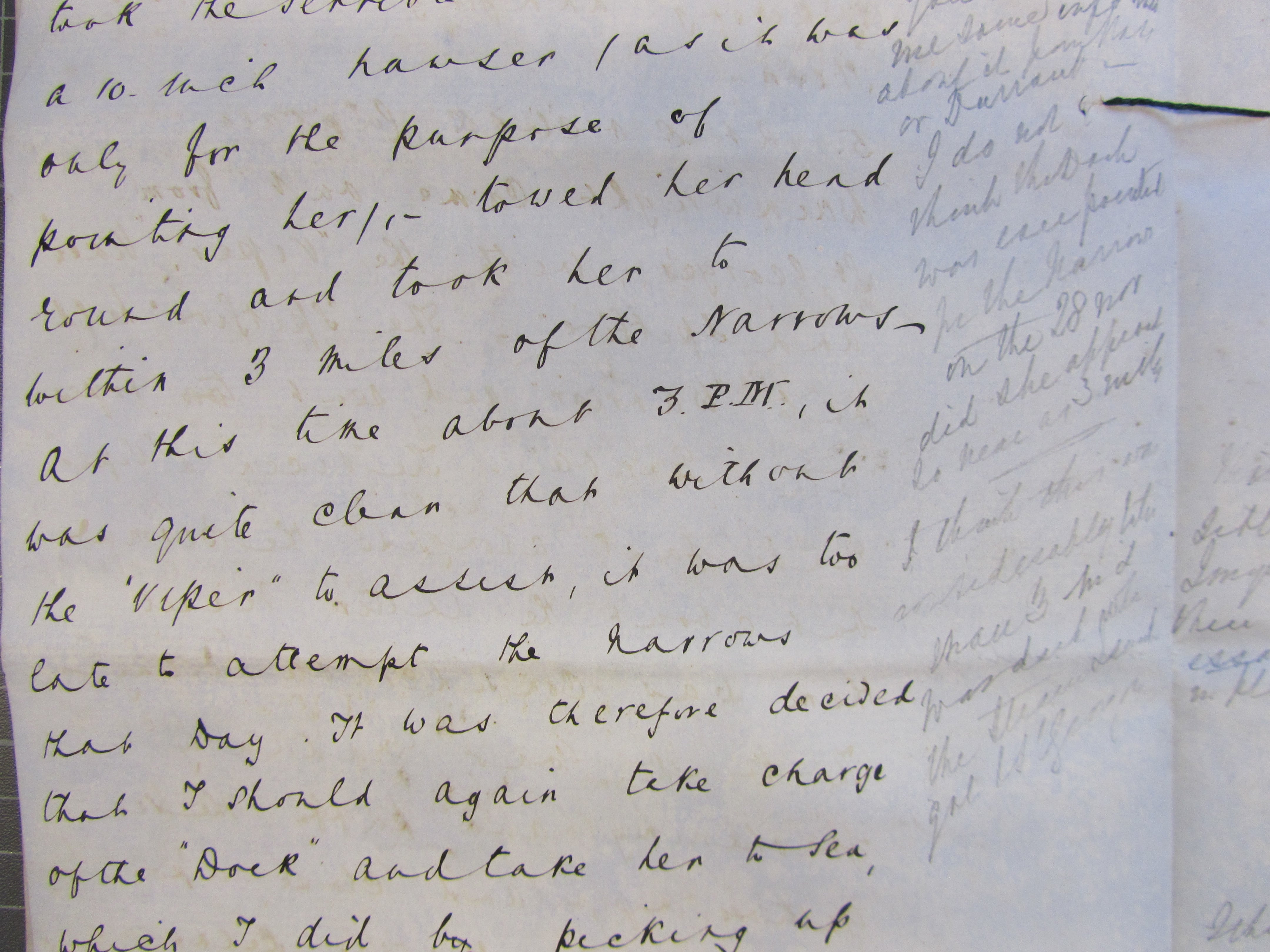 Notes made by Wainwright, showing how his observations were at variance with the report submitted by Boys (RMD ID: ADL/Z/63/3)

Announcements about the safe arrival of the dock in Bermuda appeared in the press simultaneously with notices of Wainwright’s promotion to the rank of rear-admiral.  However, after Wainwright had returned to England, he was asked by the Admiralty to account for the lack of preparations and ensuing delays. Annotations made by Wainwright suggest that his version of the events was at odds with what Boys had reported. He no longer had easy access to records of the proceedings, but some details were confirmed in letters sent from Bermuda by Lieutenant Charles W. Ross, navigating lieutenant on the Terror, in November 1869 and February 1870. Ross also supplied Wainwright with an update on events since his departure, including ongoing work for the installation of the floating dock in the Camber, the deep water shelter in the dockyard. 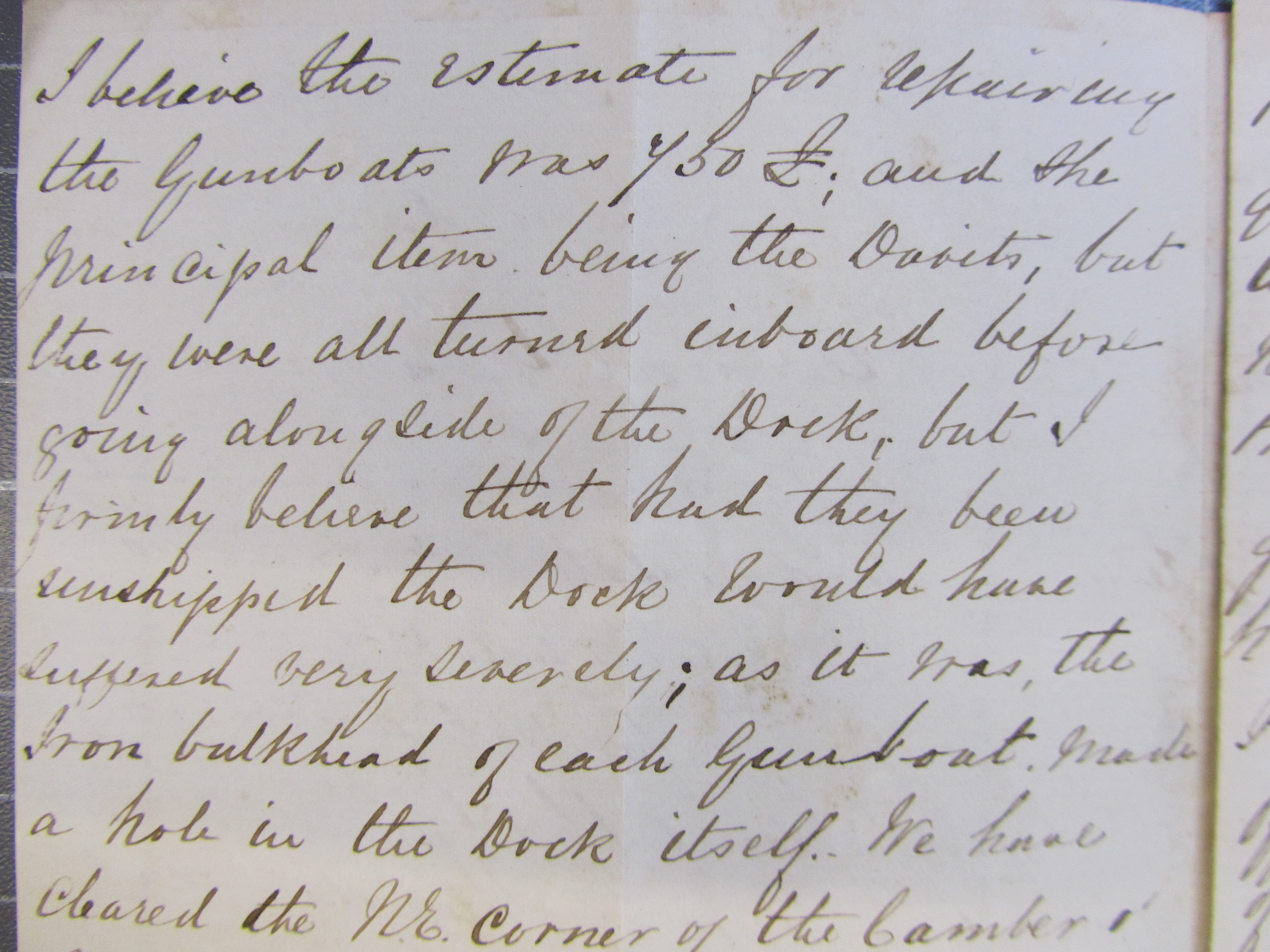 Part of a letter from Ross to Wainwright, discussing damage done to the Vixen when she went alongside the dock (RMG ID: ADL/Z/63/3)

There is no indication that Wainwright’s reputation suffered as a result of this episode. In the public eye, the story was one of success, particularly as the floating dock arrived intact and was usefully employed at Ireland Island until the turn of the century. In 1902 another giant floating structure, built by C.S. Swan & Hunter Ltd at Wallsend-on-Tyne (later known as AFD No.1), arrived in Bermuda as its replacement.  The old dock was removed for disposal, but somehow in the process it was abandoned at Spanish Point in Bermuda, where the remains are still a prominent feature.

The Caird Library holds copies of the following relevant publications:

Musing on a mollusc: Brunel’s inspiration for the Thames...

The Seaman: The Official Organ of the National Union of...