Skip to main content
You are here:
Home Discover our stories and collections Museum blog The 'Operation Chariot' plan

This month we look into Archive and Library item ADL/Q/72, papers relating to the award of the Distinguished Service Cross to Lieutenant R.T.C. Worsley DSC, RNVR, for bravery while serving as a Gunnery Officer aboard MGB314, in March 1942 participating in ‘Operation Chariot’.

Before the German Navy could deploy against allied shipping they required a dry dock facility on the Atlantic coast. Only one port was capable of accommodating large ships, Saint-Nazaire located on the River Loire estuary.

In England, a plan was conceived to attack Saint-Nazaire to deny Germany the use of the dry-dock. The plan was code named ‘Operation Chariot.’ The large dry-dock at Saint-Nazaire was the Normandie Dock. HMS Campbeltown was deemed as expendable and selected for ‘Operation Chariot’. It was converted into a floating bomb, loaded with over four tons of the volatile high explosive Amatol. Many modifications to HMS Campbeltown were required. This included removal of two funnels, extra armour added, a new 12-pounder gun and anti-aircraft guns installed and unecessary equipment removed.

HMS Campbeltown was originally the American destroyer USS Buchanan and came into the possession of the Royal Navy via the Lend-Lease agreement promoted by President Franklin Roosevelt.

The Lend-Lease Act enabled the USA to supply war materials to the allies. Following years of neutrality, Roosevelt understood he must proceed carefully with his policy to aid Britain and her allies. There was opposition to the Lend-Lease Bill from the isolationists and Americans of German descent.

The Lend-Lease Bill passed into law in March 1941, though to some it was not viewed as a neutral gesture. The American destroyer USS Buchanan was transferred to the Royal Navy under the terms of the agreement. The ship was launched in 1919, and was virtually obsolete by the time she was commissioned in the Royal Navy as HMS Campbeltown. Due to the critical war situation the ship was a welcome addition for the Royal Navy. However, the life of the ship was soon to end at Saint-Nazaire.

Upon landing the Commandos stormed ashore to create mayhem and destruction via their demolition teams, which were formed into small parties, each being assigned a specific task. Speed was a vital factor as it was known the Germans had major military reserves in the Saint-Nazaire locality.

Under the command of Lieutenant Commander Stephen Beattie, Campbeltown rammed the Normandie Dock gates, the crew disembarked and boarded MGB314. Also from Campbeltown a detachment of Commandos came ashore to proceed to their objectives.

Many of the craft assigned to return the Commandos back to England had been destroyed. Subsequently, after fierce fighting and many casualties, the Commandos decided to fight their way through Saint-Nazaire in a desperate bid to escape overland.

By this time the Commandos had expended all their ammunition and had become surrounded by the enemy. Surrender became the only option. Eventually, the explosives on a delayed time fuse on board the Cambeltown detonated with tremendous force, when over a hundred Germans were searching the ship, or were close by.

British losses were high, though the raid was a success. The damage was not completely repaired until after the war. The raid was planned with an important strategic aim, which was to prevent the German Battleship Tirpitz from using Saint-Nazaire. Following the demolition work undertaken by the Commandos and the destruction of the Normandie Dock, this was achieved. Later analysis of the raid by the British concluded that, while the planning of the attack was meticulous, insufficient consideration had been given to the withdrawal. 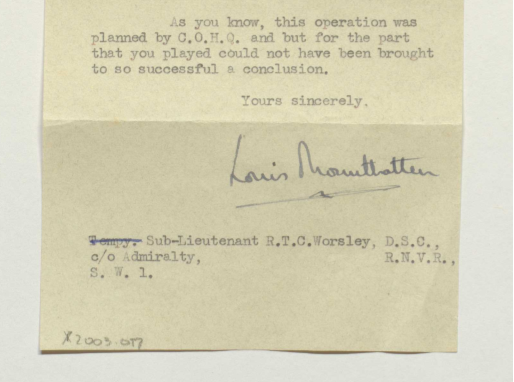 The above image sees Lord Louis Mountbatten, Chief of Combined Operations congratulates Lieutenant Worsley on the award of his DSC.

The Distinguished Service Cross mounted with Lieutenant Robert Thomas Christopher Worsley’s other medals are in the collection of the National Maritime Museum. For the Saint-Nazaire raid, five Victoria Crosses were also awarded, including a VC to Lieutenant Commander Beattie.

Should you wish to discover more regarding the Saint-Nazaire raid, the Caird Library holds a selection of items, three are listed below:

Shop
Penang in Dry Dock Print
Penang' arrived at Gravesend with a cargo of grain from Adelaide on 29th June...