Skip to main content
You are here:
Home Discover our stories and collections Explore by theme How many people have walked on the moon?

How many people have walked on the moon?

The first crewed lunar landing in 1969 was a historic triumph for the USA and humankind. Including the Apollo 11 mission, 12 men have walked on the Moon. But who were they?

At 02:56 GMT on 21 July 1969, American astronaut Neil Armstrong became the first person to walk on the Moon. He stepped out of the Apollo 11 lunar module and onto the Moon's surface, in an area called the 'Sea of Tranquility.'
Armstrong reported the lunar module's safe landing at 20:17 GMT with the words: "Houston, Tranquility Base here. The Eagle has landed." As he put his left foot onto the Moon, Armstrong declared: "That's one small step for man, one giant leap for mankind."
At 03:15 GMT, Armstrong was joined by the lunar module pilot, Edwin "Buzz" Aldrin. The two colleagues collected data and soil samples before planting the US flag at 03:41 GMT.  They also unveiled a plaque bearing President Nixon's signature and an inscription reading:

"Here men from the planet Earth first set foot upon the Moon July 1969 AD. We came in peace for all mankind."

As Aldrin and Armstrong collected samples, Michael Collins told Mission Control that he had successfully orbited the Moon in the mothership Columbia, and take-off was scheduled for 17:50 GMT.
Find out more about the Apollo 11 crew 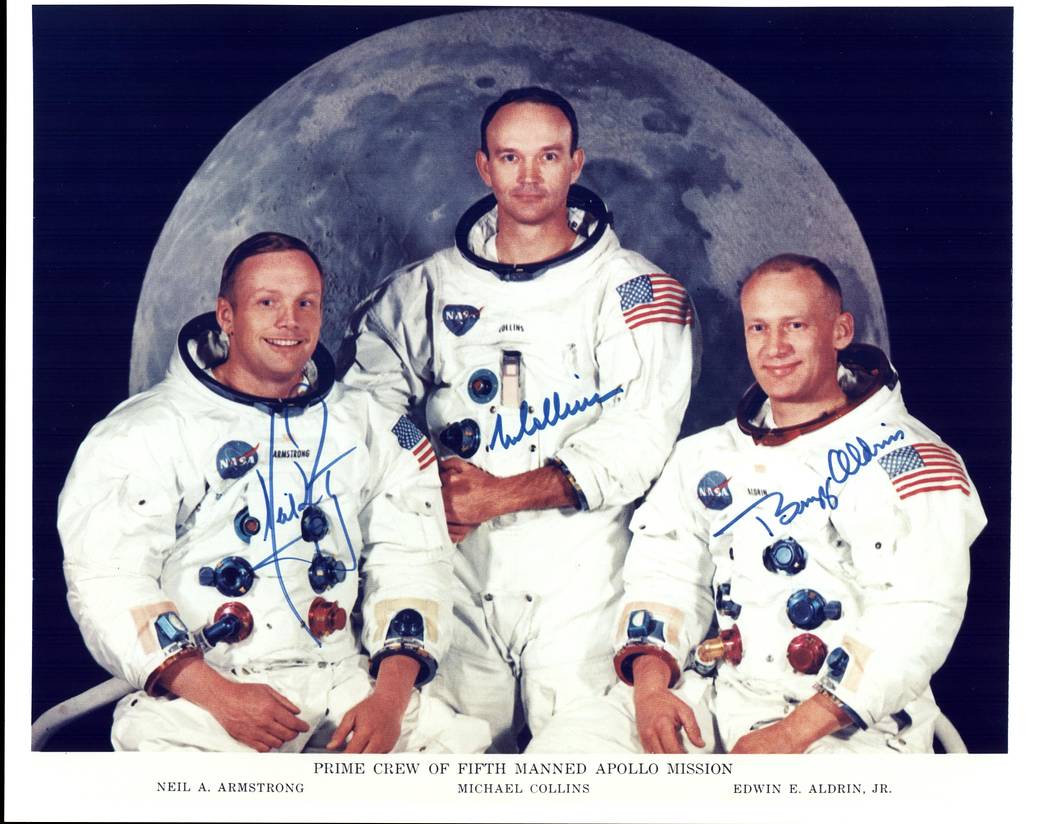 Neil Armstrong was born on 5 August 1930 in Ohio, United States. He began flying at a young age after being fascinated by planes in an air show. On his 16th birthday, he received his pilot's licence and later studied aerospace engineering at Purdue University.

During college, Armstrong joined the Navy and became a fighter pilot and fought in the Korean War, flying fighter jets from aircraft carriers. After graduating, he became a test pilot. Armstrong learnt to fly over 200 different types of aircraft, including the X15 rocket plane which could reach top speeds of over 4,000 miles per hour.

Armstrong became a member of NASA when it was established on 1 October 1958. He was selected for Project Gemini, NASA's second human spaceflight programme on 17 September 1962. It paved the way for the Apollo 11 mission to the Moon.

Neil Armstrong on the Moon

At 02:56 GMT on 21 July 1969, Armstrong became the first person to step onto the Moon. He was joined by Aldrin 19 minutes later. The two spent about two hours together outside the lunar module, taking photographs and collecting 21.5 kg of lunar material to be tested back on Earth. The video recording of his moonwalk was transmitted to Mission Control in Houston and watched by 530 million people on television across the world.

Armstrong's career after the Moon landing

Neil Armstrong had a varied career following his trip to the Moon. He retired from NASA in 1971, announcing he would not fly in space again. He then became the Professor of Aerospace Engineering at the University of Cincinnati in the US. He also acted as a spokesman for several businesses, only accepting roles within American companies. These companies include car manufacturer, Chrysler and General Time Corporation.

"As long as there are history books, Neil Armstrong will be included in them, remembered for taking humankind's first small step on a world beyond our own."

Following his death, NASA named a lunar crater and an asteroid after Armstrong. As well as many schools and streets across America, The Armstrong Air and Space Museum in his hometown of Wapakoneta and the airport in New Knoxville, Ohio (where he took his first flying lessons) are also both named in his honour.

How many people have been on the Moon?

A total of 12 male astronauts have landed on the Moon, all of whom were part of the US Apollo mission programme. These six crewed lunar landings occurred between July 1969 and December 1972. The following astronauts have been to the Moon (in order of setting foot on the lunar surface):

Gene Cernan, Harrison Schmitt
This number of men who have been on the Moon was almost 14. As part of the Apollo 13 mission, Jim Lovell and Fred Haise were scheduled to walk on the Moon, but the lunar landing had to be aborted after an oxygen tank exploded two days later. The Apollo 13 mission did set a record as the farthest humans have ever travelled from Earth. Haise was meant to again walk on the Moon as part of the Apollo 19 mission. However, the programme was cancelled due to budgetary cuts and the US focus on renovating the Skylab space station.

How long does it take to get to the Moon?

A range of factors determine how long it takes to reach the Moon, such as the type of rocket, the distance between the Earth and Moon, and the flight path the spacecraft takes.

Earth's distance from the Moon

As the Moon's journey around the Earth is elliptical, the distance changes within its 27 days orbit. At its closest approach, the Moon reaches 225,623 miles and at its furthest, it is 252,088 miles away from the Earth.
Find out more about how far away the Moon is

Crewed missions tend to take longer than passenger-free spacecraft due to the additional size and weight needed to support human life. Whether the object orbits or lands on the Moon will also determine the speed.

The first human-made object to reach the Moon

Launched on 2 January 1959, the Soviet Union probe Luna 1 travelled to within almost 4000 miles of the Moon's surface in 34 hours. The mission's original objective was to land on the Moon, but the probe went too fast and ended up in orbit around the Moon, where it remains today.

The first crewed mission to reach the Moon

The Apollo 11 mission in 1969, crewed by three astronauts took four days, six hours and 45 minutes. Apollo 10 holds the record for the highest velocity reached by a crewed spacecraft at 24,791 miles per hour.

The fastest object to pass the Moon

The quickest flight to the Moon without stopping was the New Horizons probe launched by NASA on 19 January 2006. This passed the Moon in 8 hours and 35 minutes on its way to Pluto. However, the spacecraft didn't even slow down or approach lunar orbit.

Who was the last person to walk on the Moon?

The last two people to land on the Moon were Eugene Cernan and Harrison Schmitt, both astronauts part of NASA's Apollo 17 mission. They landed in the Taurus-Littrow valley on 11 December 1972 and departed on 14 December. During this time, they explored the lunar surface for around seven hours each day, collecting samples and driving in a lunar rover vehicle. They spent 22 hours on the Moon in total. Cernan's final words before lifting off were

"As we leave the Moon at Taurus-Littrow, we leave as we came and, God willing, as we shall return, with peace and hope for all mankind."

How many flags are on the Moon?

A total of six flags have been planted on the Moon – one for each US Apollo landing. Unfortunately, Apollo 11's flag was too close to the landing module and was knocked over by the exhaust when the module launched again. More recently, higher resolution images from the Lunar Reconnaissance Orbiter show that the other five remain standing. The flags were made of ordinary nylon, so they have all long since been bleached white by the Sun's UV radiation.