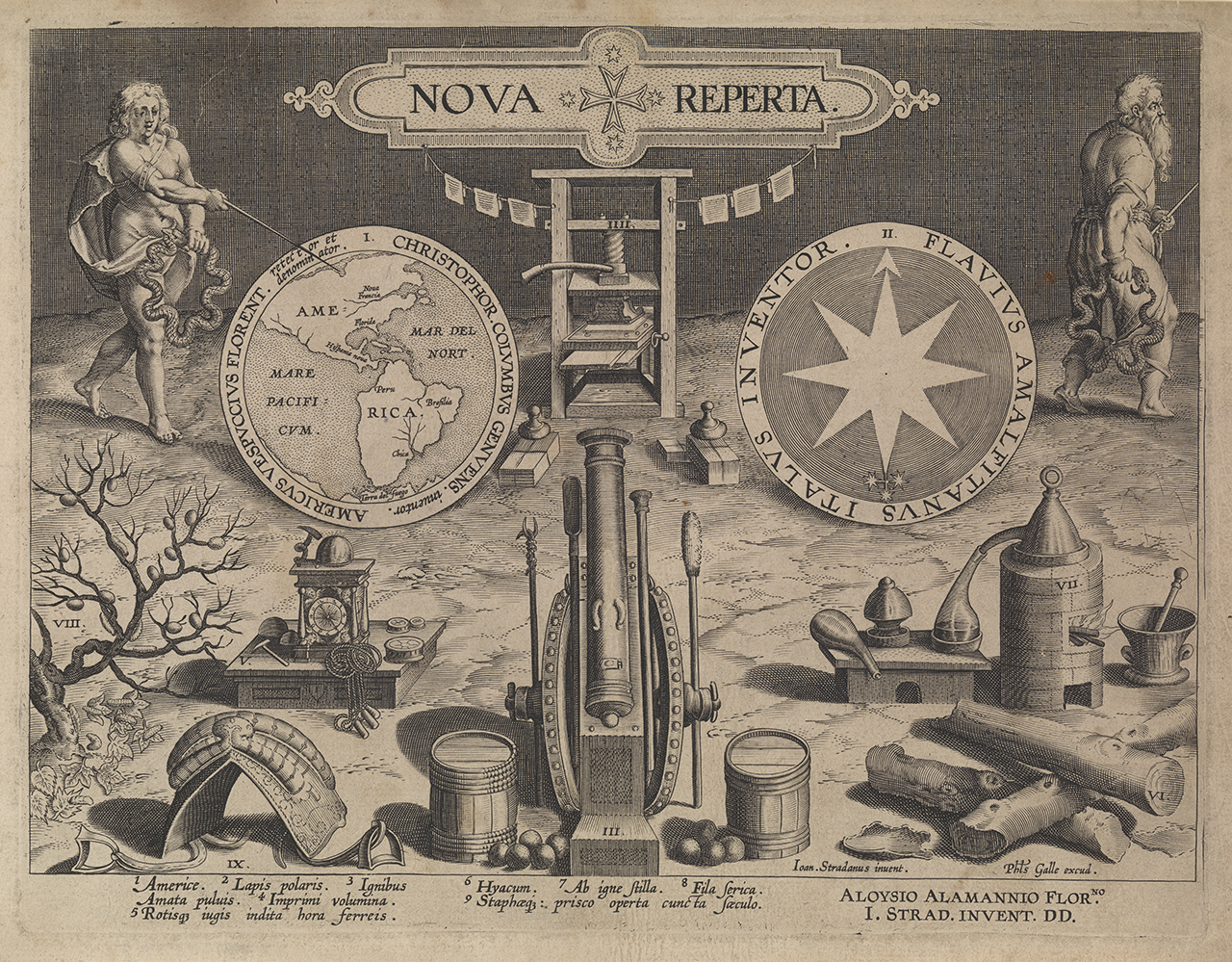 Fronticepiece. This is a title plate. The title 'Nova Reperta' is inscribed in a cartouche at the top. Below, to left, a naked woman pointing to a roundel with the map of America and to right an old man, seen from behind, next to a roundel with a compass; both carrying a snake biting its own tail. Below the cartouche is a printing press with sheets of printed text hanging on a line and in the foreground is a selection of various objects relating to new discoveries such as a mechanical clock, a cannon and a tree with silk worms. Within the wider context of 16th-century print production, the Nova Reperta offers a fine example of interplay between intellectual content and artistic invention -- whilst Stradanus serves the interest of science and the intellectual elite, they too were used to serve the interests of art. The Nova Reperta expresses the encyclopedic culture of the 16th century. The inscriptions indicate that Stradanus and Galle first intended to create a series of just 10 prints, with a strong emphasis on the discovery of America. However, the series was almost immediately expanded with 10 further prints.

As the title indicates, Nova Reperta catalogues inventions and discoveries in the 'modern' world (as opposed to the classical world of antiquity). The print series dates to the 1590s and probably emerged in two distinct phases. During the late 16th century scientists were starting to break free from the constraints that had hitherto been imposed by the unchallenged authority of the classical writers. It commemorates both Italian and Northern achievements, comprised of a title page and nineteen figurative representations. As a set, it dates between 1580 and 1605. It seems to have been started as a set focusing on America, but soon expanded and can now be grouped into four themes (according to Alice Bonner McGinty's scholarship):

The Nova Reperta was designed by Johannes Stradanus. Born in Bruges in 1523, Stradanus was a versatile, 16th-century mannerist artist who worked across a range of mediums and spent most of his artistic career in Florence. The set is dedicated to Italian humanist Luigi Alamanni, who belonged to an old aristocratic Florentine family. He was not only the dedicatee of the set, but was clearly intellectually involved in their production and likely assumed the role of artistic mentor, commenting on details as drawings were sent between Antwerp and Florence. Evidence of Almanni's influence on the series can be seen in his annotations on the backs of some of Stradanus's drawings. Furthermore much of the icongraphy relates to Florentine subjects. Alamanni had drawings in his possession suggesting he may also have been financially involved. Much information in Nova Reperta was probably gleaned from texts in his library.

We know the names of two of the engravers who worked on this project in the workshop of Philips Galle. His son Theodoor Galle signed the engraving Vespucci rediscovers America. Jan Collaert's name appears on three of the plates: 15,17,18 and four other plates have also been attributed to him: 1,2,12,16.
Back to Search Results
Buy a print License an image
Share:
Link copied to your clipboard!