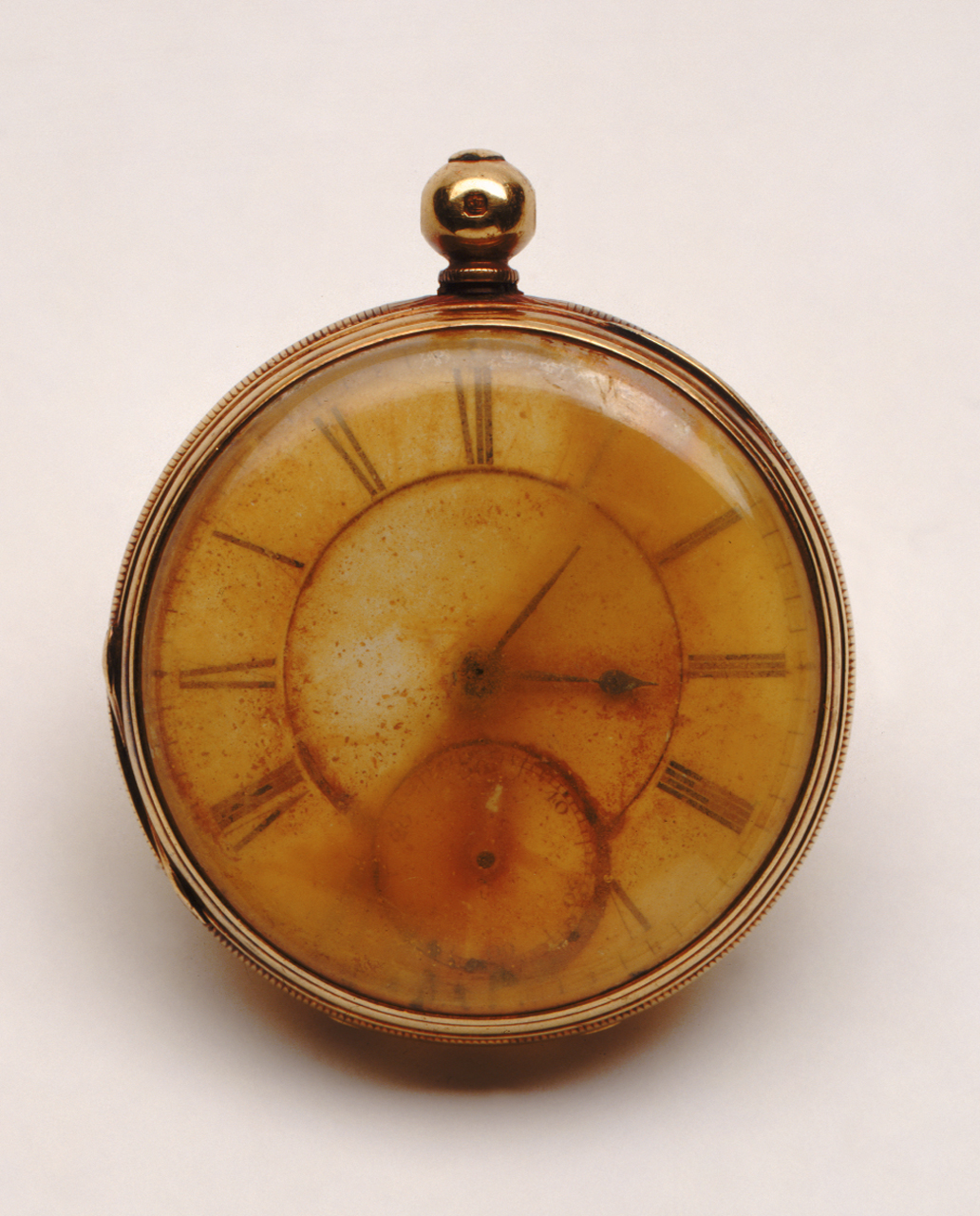 Pocket watch in a gold open-face case. Due to extensive rusting it is not possible to access the movement, but it is probably 30-hour duration, single train, gilt brass, three-quarter plate movement with a ratchet-tooth lever escapement. There is a flat white enamel three-piece dial with Roman hour numerals and minute circle. The centre is recessed with a subsidiary seconds dial with Arabic ten seconds numerals and a seconds circle. The watch has gold spade and poker hands. There is a convex bullseye glass over the dial. The open-face case is 18 carat yellow gold with a milled band and engine-turned decoration on the back, with a central belt and buckle motif around an uncut cartouche. The watch has a plain bulbous pendant with push-piece.

This watch belonged to Robert Douglas Norman who perished in the Titanic disaster on the morning of April 15, 1912. He was one of over 300 second-class passengers aboard the vessel heading for New York. Norman worked for the AEG Electric Company in Glasgow but had resigned his appointment with the intention of visiting his brother in Vancouver before completing a world tour. He was aged 27 at the time of the disaster. Another passenger, Kate Buss, gave an account of his final hours. Robert Norman witnessed the collision 'He told us the deck was covered with ice splinters and he thought the iceberg extended up beyond the masts of the ship.' Norman found Kate a place in a lifeboat but had to remain on board ship. This gold-cased watch was found among his clothing when his body was recovered from the sea by the vessel 'Mackay-Bennett'. The rusted watch hands still show the time the watch was reading when he entered the water; seven minutes past three. Clocks and watches on board the Titanic would have been set back on a daily basis to account for the ship's new local time, but at the time the ship sank, approximately 2.20 am, it seems Norman had not had the opportunity to re-set his watch from the previous days' local time.
Back to Search Results
Buy a print License an image
Share:
Link copied to your clipboard!