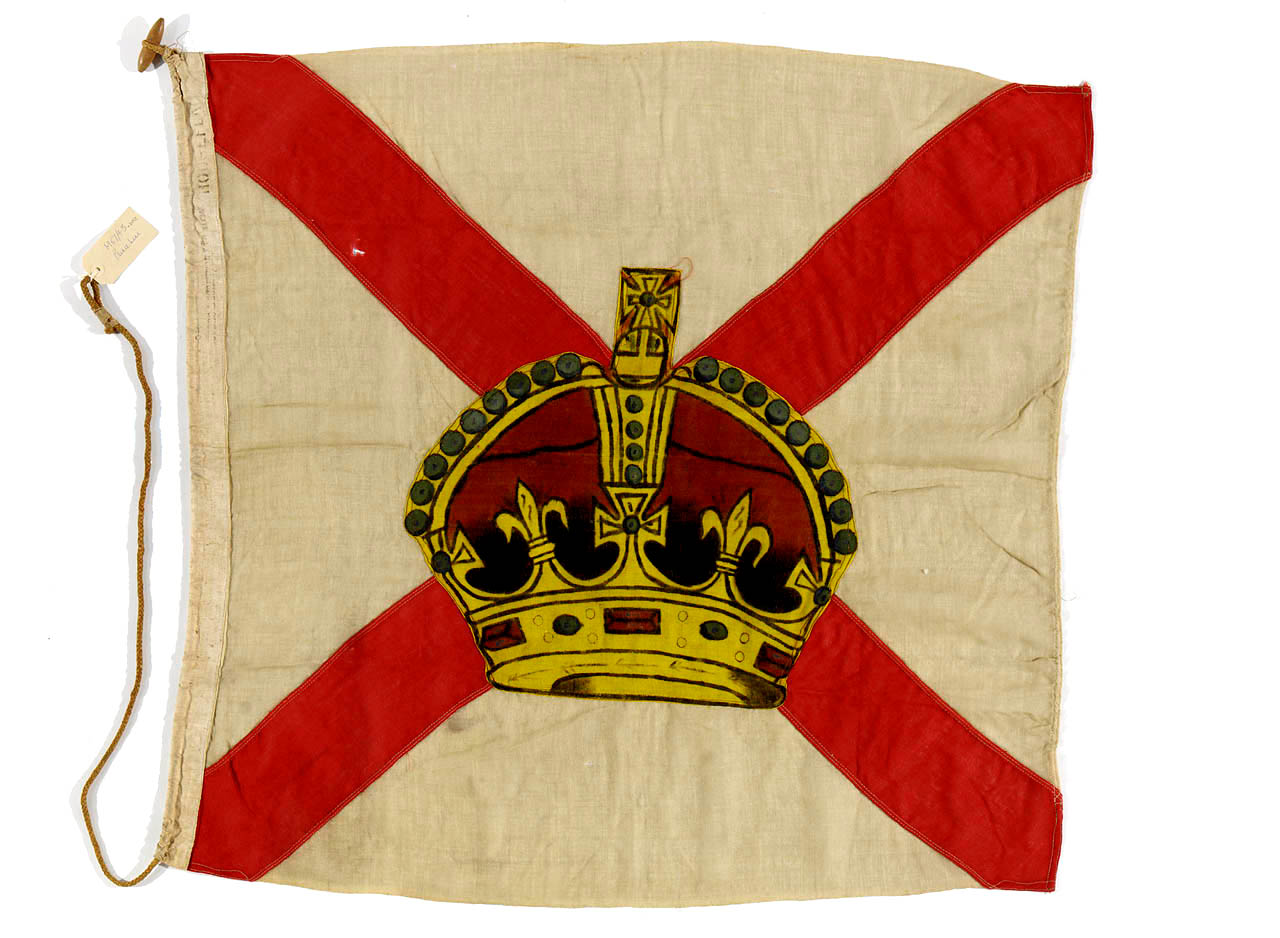 House flag of the Royal Mail Steam Packet Co., London. A white flag with a red saltire overall in the centre of which is a gold cross. The flag is made of a wool and synthetic fibre bunting. It has a linen hoist and is machine sewn. The crown is printed. A rope and toggle are attached.

The Royal Mail Steam Packet Company was granted a Royal Charter in 1839 to carry mail to the West Indies and Central America in accordance with a scheme devised by its founder, James Macqueen. The first fleet consisted of 14 barque or barquentine-rigged wooden paddle steamers, all named after British rivers. The ‘Thames’ sailed with the first mail, passengers, and high value cargo on 3 January 1842.

In 1851 a service to Rio de Janeiro was started and the association with the east coast of South America remained the mainstay of the services to the end. By 1853 the Company had started to build iron-hulled ships. Despite various setbacks, the services survived with the support of the Admiralty Mail Contracts. Part of the contract required the vessels to be available for use as men-of-war. The Crimean War saw some of the Company’s steamers sent to the Black Sea as transports. In both World Wars some of the RMSP ships were converted to Armed Merchant Cruisers.

In 1863 the Company built its first two screw steamers, the 'Douro' and 'Rhone'. In 1886 the 'Orinoco' was the first of the Company’s ships to have electric light and triple expansion engines. The final quarter of the century saw the Company engage on other routes and services. Increasingly, the Company acquired interests in other shipping companies. In 1903 Owen Phillips, later Lord Kylsant, became Chairman and revitalized the company, recognising the need to increase its cargo capacity, particularly the transport of frozen meat from South America. By 1927 the Royal Mail Steam Packet group had acquired the shares of the White Star Line and had become a huge shipping conglomerate.

Between 1929 and 1931 the group encountered financial difficulties and was drastically reconstructed. The Royal Mail Steam Packet Company was re-branded as Royal Mail Lines, Ltd. Royal Mail continued to run to the East Coast of South America, the West Indies, Central America and the North Pacific Coast via Panama. In addition, it also embarked on passenger cruises in the inter-war years and again in the late 1960s and early 1970s. Like many other shipping companies it was affected by containerisation. By 1965 Furness Withy acquired the shares and by 1982 the Royal Mail ships was totally absorbed into Furness Withy and the Royal Mail name was gone.

Royal Mail was one of only three British shipping companies permitted to have the Royal Crown in its house flag.
Back to Search Results
Buy a print License an image
Share:
Link copied to your clipboard!