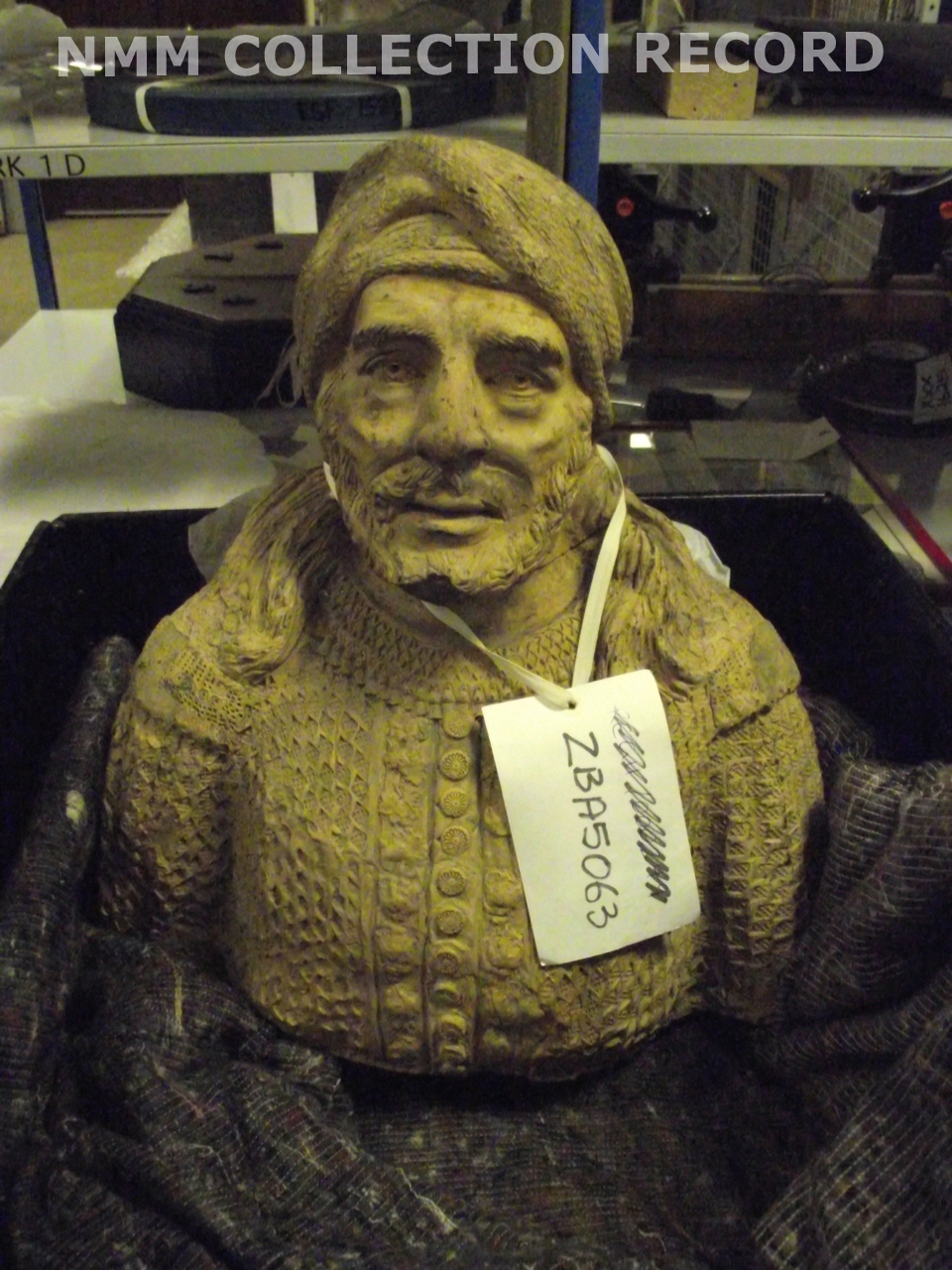 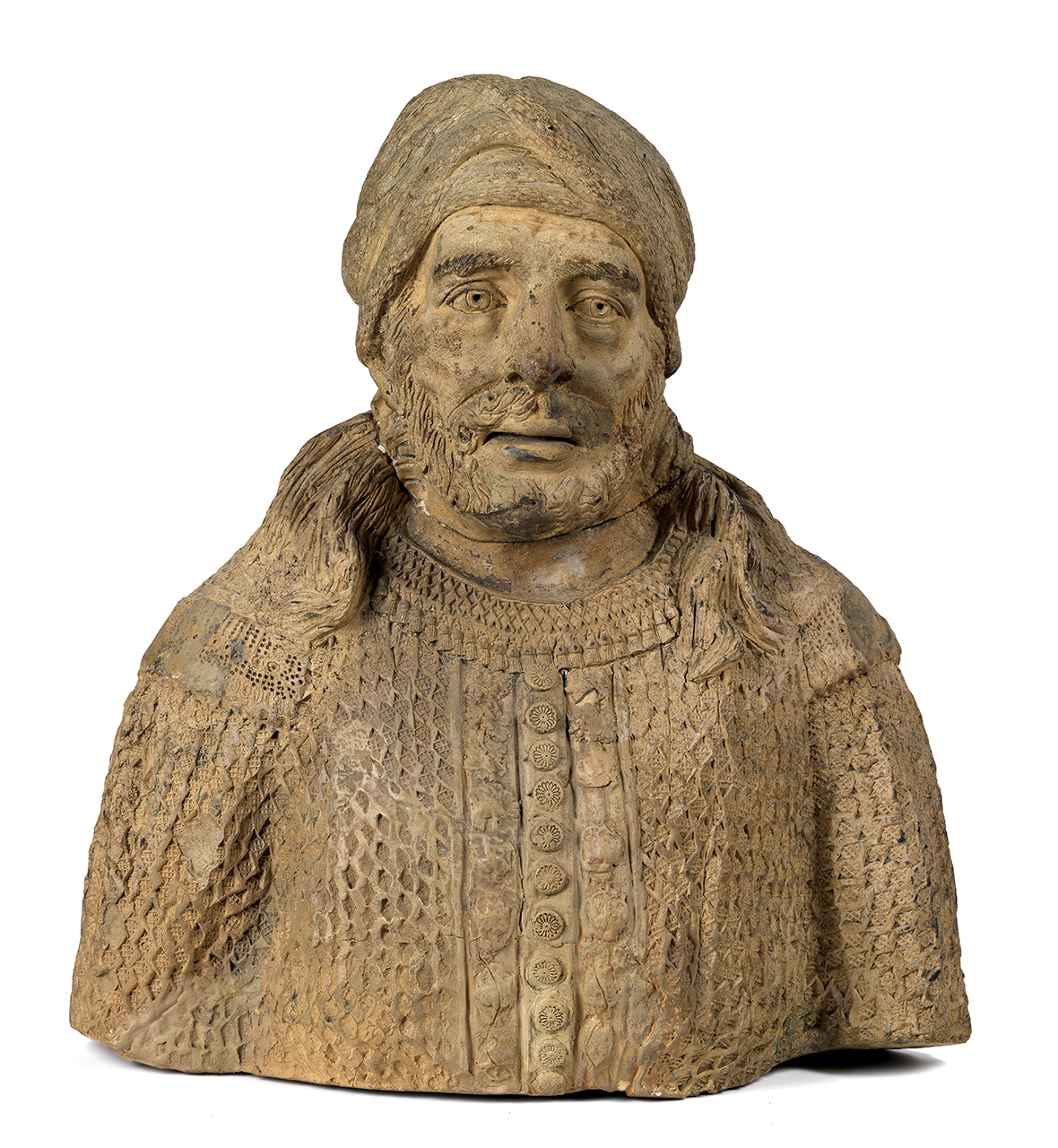 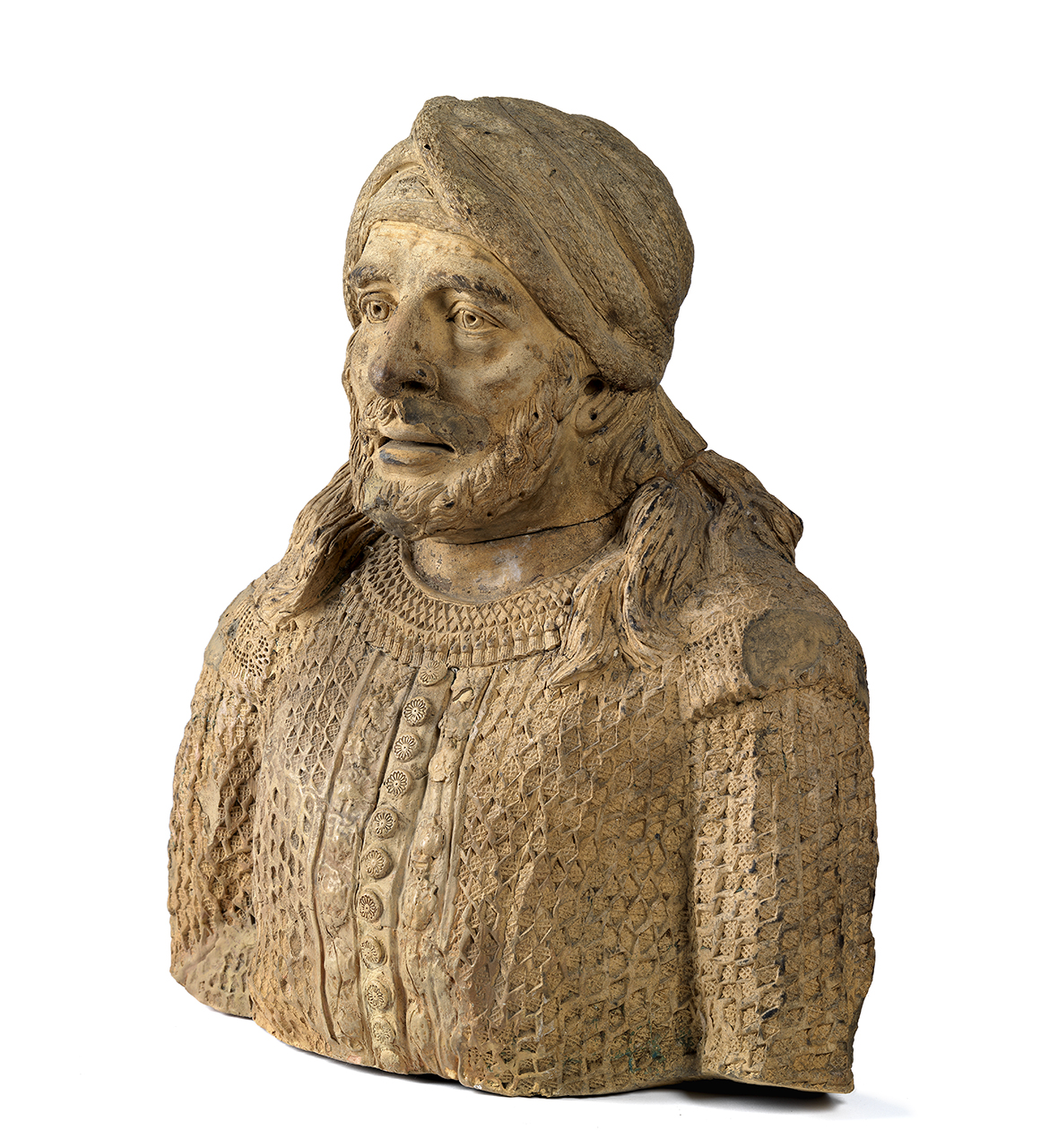 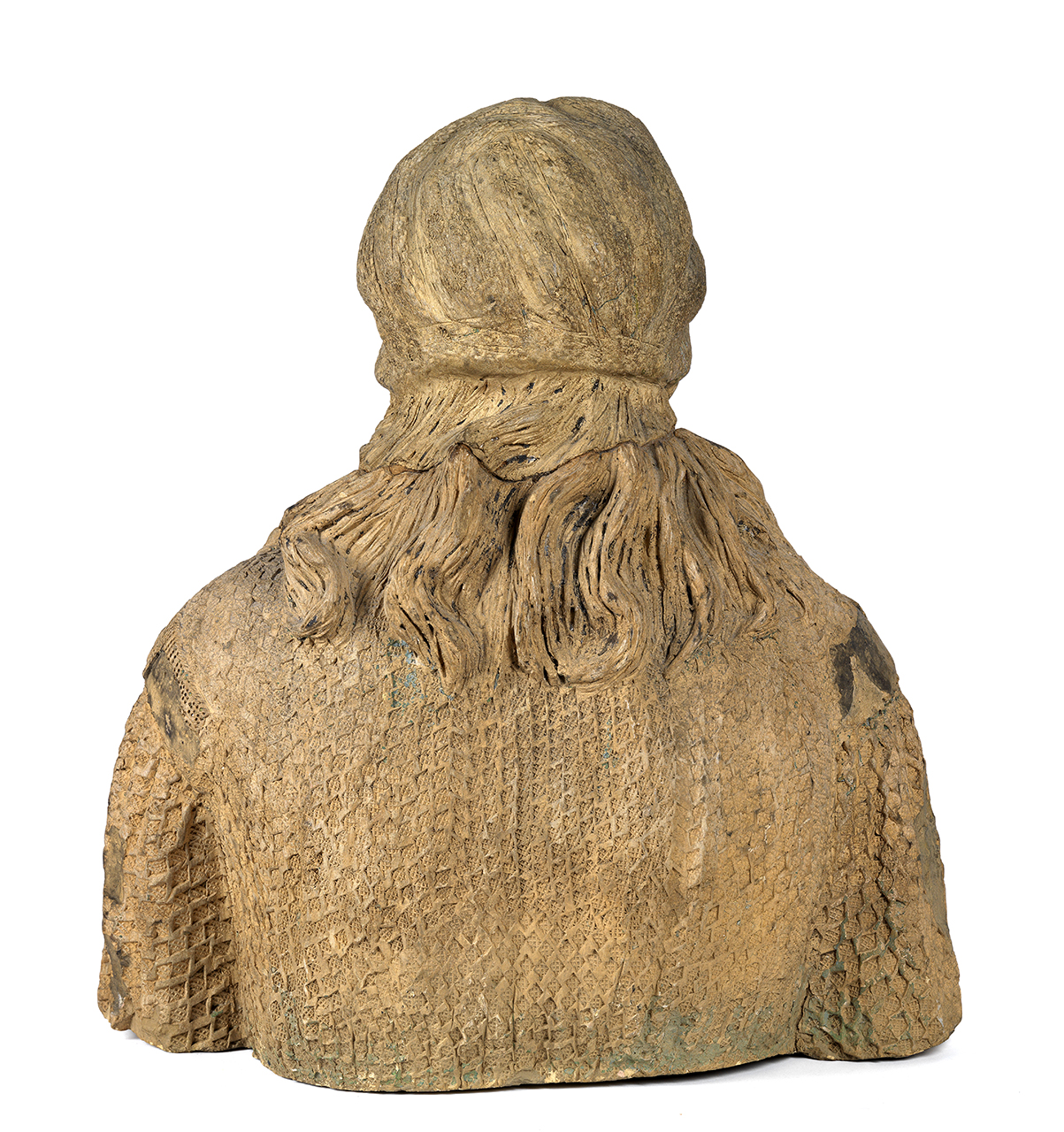 The head and upper torso of a bearded and moustached male figure of, apparently, a ‘Sallee rover’, with a turban-like cap and distinctive buttoned and tasselled tunic, upper arms included. It has a hollow body with signs of hollowing out (probably after some original loose moulding core was removed), the walls being about an inch thick. The solid head and neck were separately moulded, and inserted and fixed from the inside before firing, leaving a distinct outer join. The whole, which was formerly painted, sits on its lower rim, stable on any flat surface. The bottom edge shows little wear but has a sizeable plaster repair, sitter’s right front. The tunic is of a close diamond pattern formed by repeated impress of a hand-held stamp, and the buttons and small tassels probably done the same way, with some elements being modelled and then applied. It seems to be a portrait of – or modelled on – a specific individual in middle life with a characterful but neutral expression, not a ‘type’ or caricature.

This bust appeared without provenance at a Bonham’s, Chester, sale (no. 18083, 13 May 2010, lot 729) where it was described as a ‘Barbary pirate’, 19th-century, and was bought by the dealer from whom the Museum obtained it in 2011. He first showed it to the V&A sculpture department who suggested it was probably ‘early 18th-century, or perhaps a little earlier’ and possibly from the circle of Peter Scheemakers the elder (1652-1714). V&A costume advice confirmed the subject, based on illustrations of Moroccan dress in Jean Bescancenot’s, 'Costumes of Morocco' (English edition, 1990, pl.3, p.141), noting that the style shown persisted into the 19th century:

‘He wears the elaborate dress of the sailors of Rabat-Sale [on the Atlantic coast of Morocco]. The many layers of the garments which would have been of felted cloth, richly decorated with gilt plaited braid couched in foliate designs, were of Turkish influence, and introduced by the corsairs who regularly terrorised the North African Coast.'

The vendor also commissioned paint analysis. This confirmed the bust to have been painted ‘at least seven times’; also that the earliest decoration was seemingly found ‘as priming and ground layers were both in evidence, underneath the coloured decoration … the pigments used are the ones which were employed for many centuries, so are not useful for dating, but the choice of green may be significant. Copper green pigments [as found] were largely dropped after the invention of Prussian blue in 1704, which [thereafter] made blue/yellow mixtures the most popular choice for green paint’. Also, ‘The use of dark brown is unusual, and it is difficult to think of any parallels, apart from that dark brown grounds were used for European canvas paintings in the seventeenth century’. Without having any other knowledge of the piece, the paint specialist therefore concluded that ‘if it’s European, there’s nothing technical about the decoration to stop it being 16th- or 17th-century.’

In sum, it appears to be early and is perhaps likely to be British, but its purpose remains a mystery. Probably too lifelike to have been a trade sign and rather coarse for a gallery piece, it was perhaps decoration on a building or monument. Painting and losses of applied decoration might suggest external use, as does organic material embedded in the neck join (possibly from burial at some point). If the subject was a Barbary corsair, he was perhaps a captive or 'exotic' visitor: if not, possibly the Muslim servant of someone with Mediterranean connections. Despite these unknowns, the Museum considered it a convincing image of a North Africa corsair of whom, given that personal portraiture is unusual in traditional Islamic cultures, such an example is rare if not unique. From this viewpoint its date, whether about 1700 or early 19th-century, is relatively immaterial. [Pvdm 12/11]
Back to Search Results
Buy a print License an image
Share:
Link copied to your clipboard!