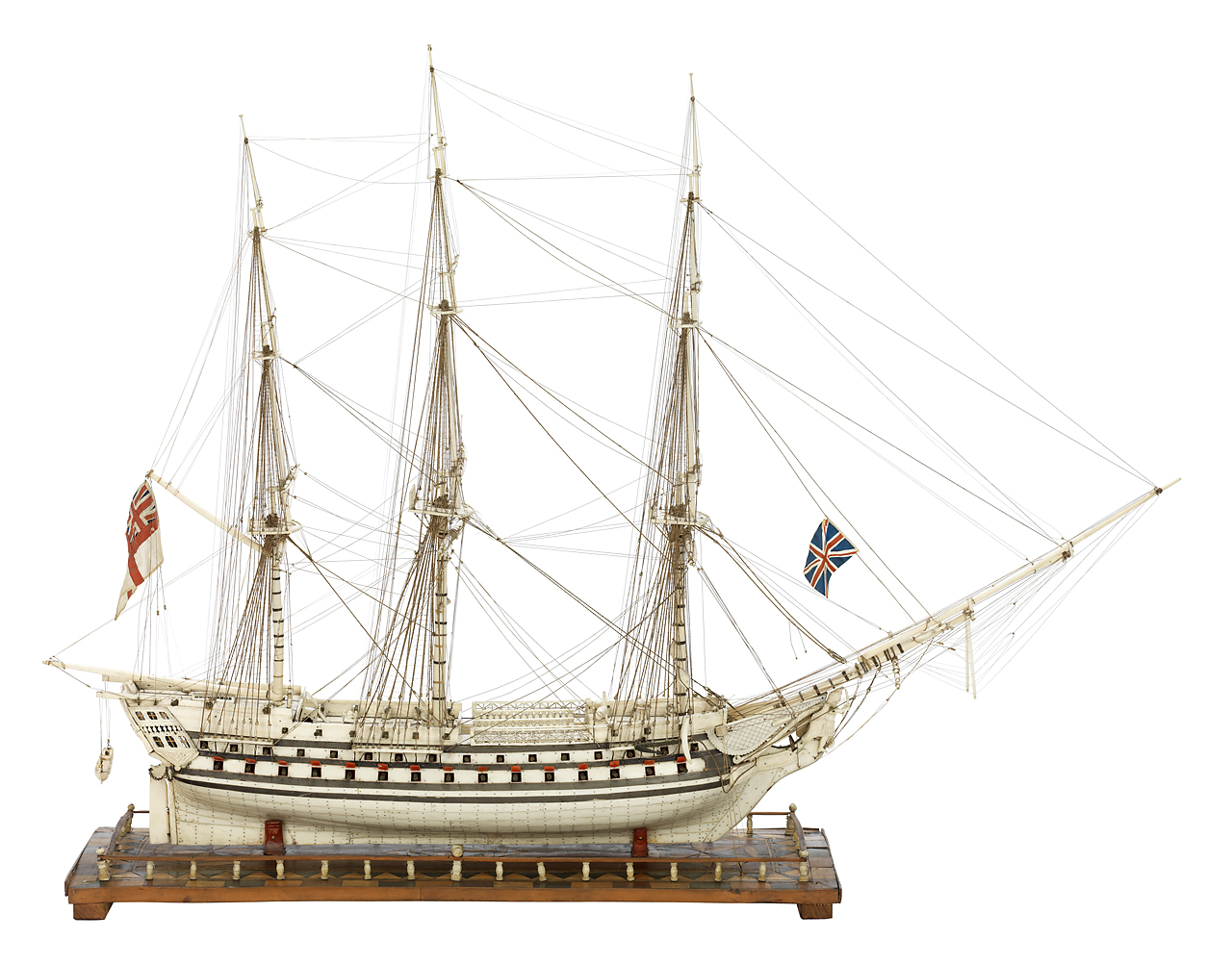 Scale: Unknown. A contemporary full hull model of the 80-gun two-decker ‘Foudroyant’ (1798), made from bone and horn, pinned to a wooden core, the whole model is mounted on its original bone and parquetry covered baseboard. The model is fully rigged with standing and running rigging and carries a white ensign on the stern, a command pennant at the top of the mainmast and a union jack on the foretopsail stay. Other fittings include a ships boat carved in bone rigged from a pair of davits over the stern, anchors, capstans, compass binnacle, salt beef and water casks, and the standard painted figurehead of a classical warrior. As is typical with this type of model, the turned brass guns along the main and upper gundecks can be partially pushed into the hull, and by pulling the two rope cords at the stern (now broken and missing), they ‘pop out’ to the firing position.

During the Revolutionary and Napoleonic Wars (1793-1815), large numbers of French prisoners were housed in open prisons throughout Britain. Their daily food ration included half a pound of beef or mutton on the bone. Subsequently, the bone became a readily available source of raw material from which a variety of objects were crafted. Other materials were also used including wood, horn, brass, silk, straw and glass. Typically, the models were not made to scale as accurate scale plans were not available and tools were limited. To realise a good price at market, the models were often named after famous ships of the time.

The ‘Foudroyant’ was built at Plymouth Dockyard and launched in 1798. Measuring 184 feet in length by fifty feet in the beam, she carried a crew of up to 650 men. The ‘Foudroyant’ had a very active career and saw action in the Mediterranean, South America, and was under the command or the flag ship of some very distinguished officers including Lord Keith, Rear Admiral Lord Nelson and Captain Thomas Hardy. From 1840 she was laid up in ordinary, became a gunnery training ship during the 1860’s before being sold to German shipbreakers in the early 1890’s. She was then rescued from breaking and purchased by J. R. Wheatley Cobb as a training ship for boys. Unfortunately, she was stranded on Blackpool Sands during a fundraising and propaganda cruise and later broken up in situ in 1897.
Back to Search Results
Buy a print License an image
Share:
Link copied to your clipboard!