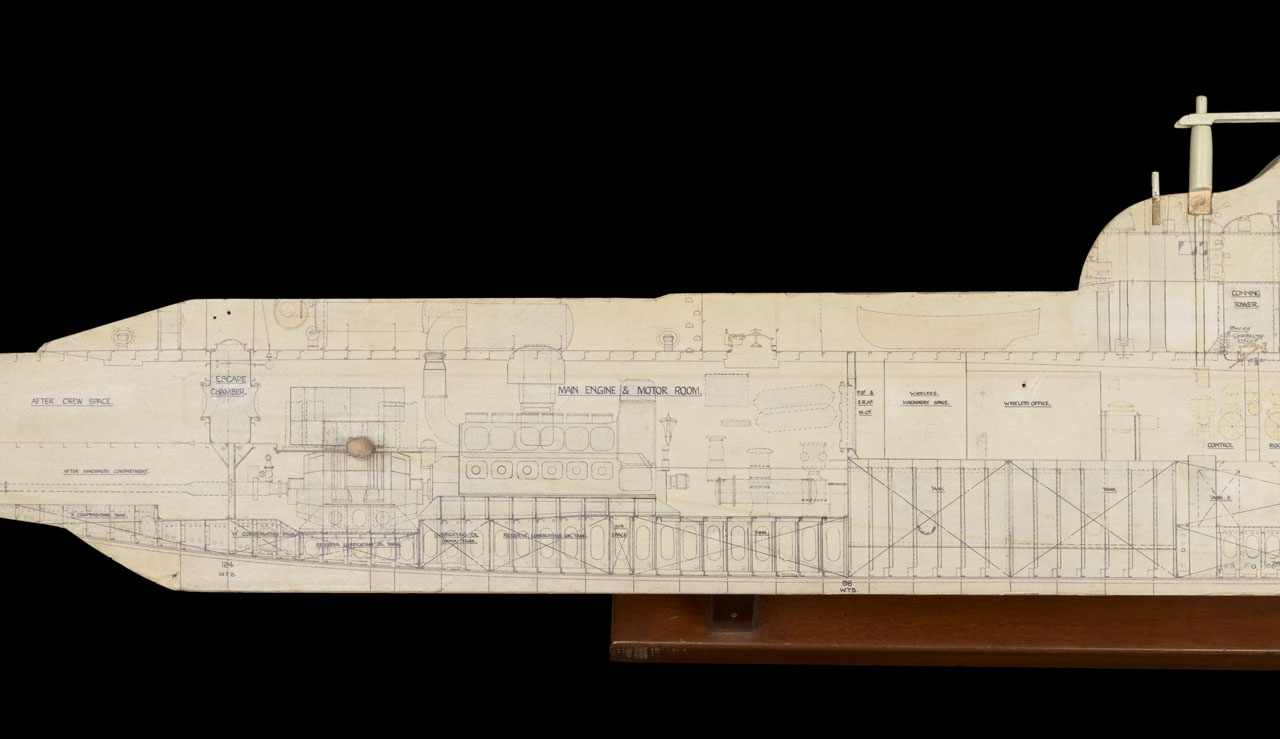 Scale: not calculated. A fascinating model of the ill-fated submarine, looking like a ghost ship in its being painted all over a uniform off-white. It was made for the Admiralty inquiry into the loss of the ‘Thetis’ (1938). It splits longitudinally, and sections of the starboard half can also be detached. The inner faces of the detachable sections are marked and annotated and the entire length of the inner port-side longitudinal section is inscribed with a mass of information delineating compartments, storage areas, machinery and equipment, and other details.

The ‘T’-class submarine ‘Thetis’ was one of the last class of patrol submarines built before the outbreak of the Second World War. Built by Cammell Laird at Birkenhead, she was 265 feet in length, armed with ten 21-inch torpedo tubes and had a complement of 59. On 1 June 1939 ‘Thetis’ prepared to make her maiden voyage, a test run and dive in the home waters of Liverpool Bay. Conditions on board were extremely cramped as there were 103 men aboard, a mixture of her crew and engineers from Cammell Laird. In fact Laird’s workers were given the opportunity to disembark prior to the dive but they all chose to stay aboard. ‘Thetis's’ initial attempt at a dive was unsuccessful as the vessel, for some reason, was too light. The decision to allow seawater into the torpedo tubes to add weight to the submarine fell to Lieutenant Frederick Woods.

Without the knowledge that the outer torpedo doors were already open and the tubes full of seawater, Woods gave the order. Woods was also unaware that a few weeks earlier, a painter, working on the other side of the torpedo door, had allowed paint to drip inside the test tap and solidify. With the test tap blocked, Woods believed it was safe to open the door inside the submarine. Suddenly hundreds of tons of water flooded the first and second compartments and ‘Thetis’ nose-dived.

The best rescue ship was hundreds of miles away, aircraft reported inaccurate locations for ‘Thetis’ and cutting equipment was ordered late. On board, levels of carbon dioxide became dangerously high. During the night, 60 tonnes of drinking water and fuel-oil were dumped allowing ‘Thetis’ to rise stern first. A wire hawser was strung around the stricken submarine and held in place by a salvage ship. They planned to keep the stern up during the rising tide. However the strain on the wire was too great and the hawser snapped, leaving ‘Thetis’ to sink to the bottom of the Bay. The bodies of the 99 men who suffocated remained inside the submarine for a further four months until she was salvaged. At the inquiry, no single person was ever blamed for the disaster.

‘Thetis’ was salvaged and recommissioned as HMS ‘Thunderbolt’, which sank with all hands on 14 March 1943.
Back to Search Results
Buy a print License an image
Share:
Link copied to your clipboard!