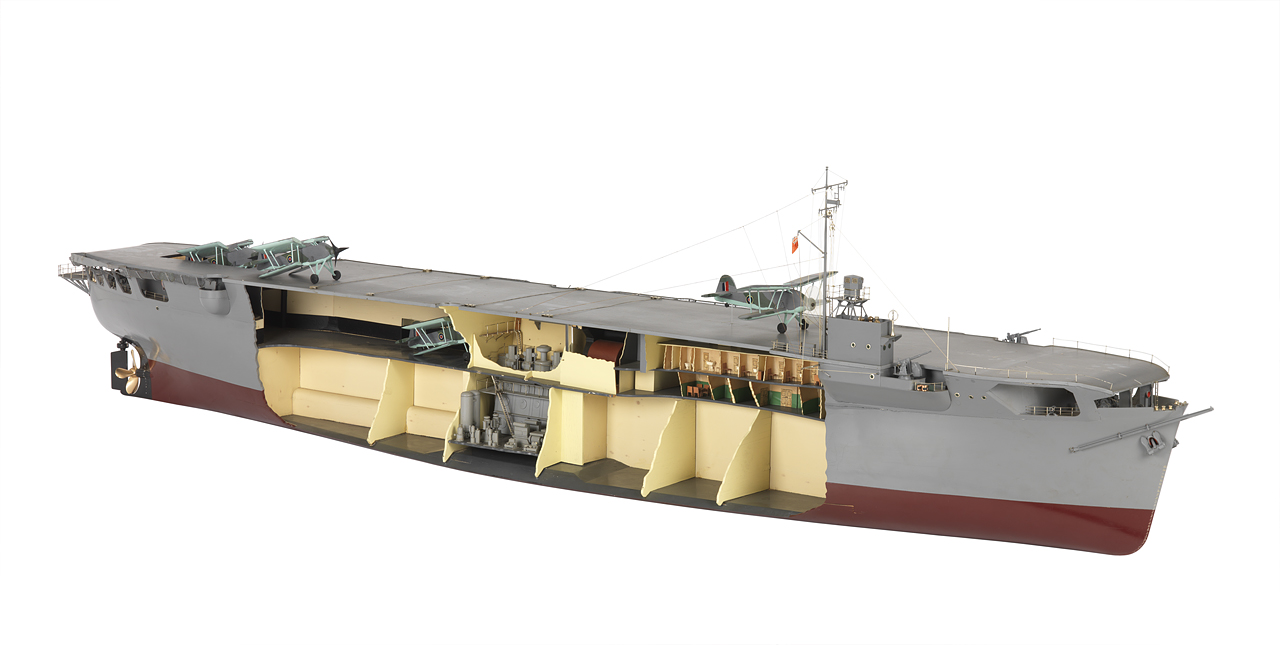 Scale: 1:60. In the Battle of the Atlantic, it soon became apparent that the successful defence of convoys required the use of ship-borne aircraft to combat the U-boats operating in the mid-Atlantic 'gap', where shore-based anti-submarine aircraft could not reach. From the outset it was accepted that the great fleet aircraft carriers could not be spared for convoy duties and so a number of makeshift substitutes evolved. Suitable merchant ships were converted into escort carriers for convoy operations and became known as the ‘Woolworth’ carriers.

By the middle of the War the level of available mercantile tonnage was so low that, to avoid further reduction by converting ships to exclusively operational roles, a dual-role aircraft carrier was devised. Tankers or grain ships with their long uncluttered decks, and relatively high speeds, were fitted with a flight deck and small hanger, whilst still retaining their ability to carry cargo. Nineteen MAC (merchant aircraft carrier) ships were built in eighteen months. Four were laid down as tanker MAC ships, while nine tankers and six grain ships were converted during construction. Grain MAC ships, like the 'Empire MacAlpine' depicted by the model, carried six ‘Fairey Swordfish’ aircraft. The construction of these vessels was a triumph of co-operation between servicemen and civilians. Speed of construction was essential and was achieved by the successful teamwork of naval constructors and civilian shipbuilders.

The plaque accompanying the model tells us that it depicts the merchant aircraft carriers 'Empire MacAlpine' and 'Empire MacKendrick', both built by the Burntisland Shipbuilding Company Limited and launched1943. Strictly speaking however this model really represents the former vessel and we can see what an unusual hybrid of a ship she was. She was 433 feet in length, fifty-seven feet in the beam, and 7954 gross registered tons. She had a speed of 12.5 knots and her complement of 107 was made up of roughly equal numbers of Royal Naval and merchant service crews. Like all MAC ships, she flew a Red Ensign to denote her merchant service status. 'Empire MacAlpine' was managed by Messrs William Thompson & Company, on behalf of the Board of Trade, and was employed in escorting convoys to and from Halifax, Nova Scotia. She was the first ship of her class to carry out both a deck landing and a landing at night. Five members of her crew, including her Master, were decorated and two were mentioned in despatches for operations in the Atlantic, in 1943. After the War ‘Empire MacAlpine’ was reconverted for trading purposes and, having undergone several changes of name, was in service until 1970 when she was sold for breaking up at Hong Kong.

The model, given to us by the Admiralty in 1946, might have been made for demonstration purposes. There are two ‘Fairey Swordfish’ on deck, one with its wings still in a folded position while, at the stern of the flight deck, a third is emerging on the lift from the hanger bay. These aircraft have been made too small in comparison with the scale of the model and they should be carrying depth charges instead of torpedoes. There are other inaccuracies, too, for instance the forward two guns, one either side just forward of the island, were Bofors not Oerlikons. It’s still a great model and, with its internal lighting and cutaway sections on the starboard side of the hull, it tells us much about these extraordinary ships.
Back to Search Results
Buy a print License an image
Share:
Link copied to your clipboard!