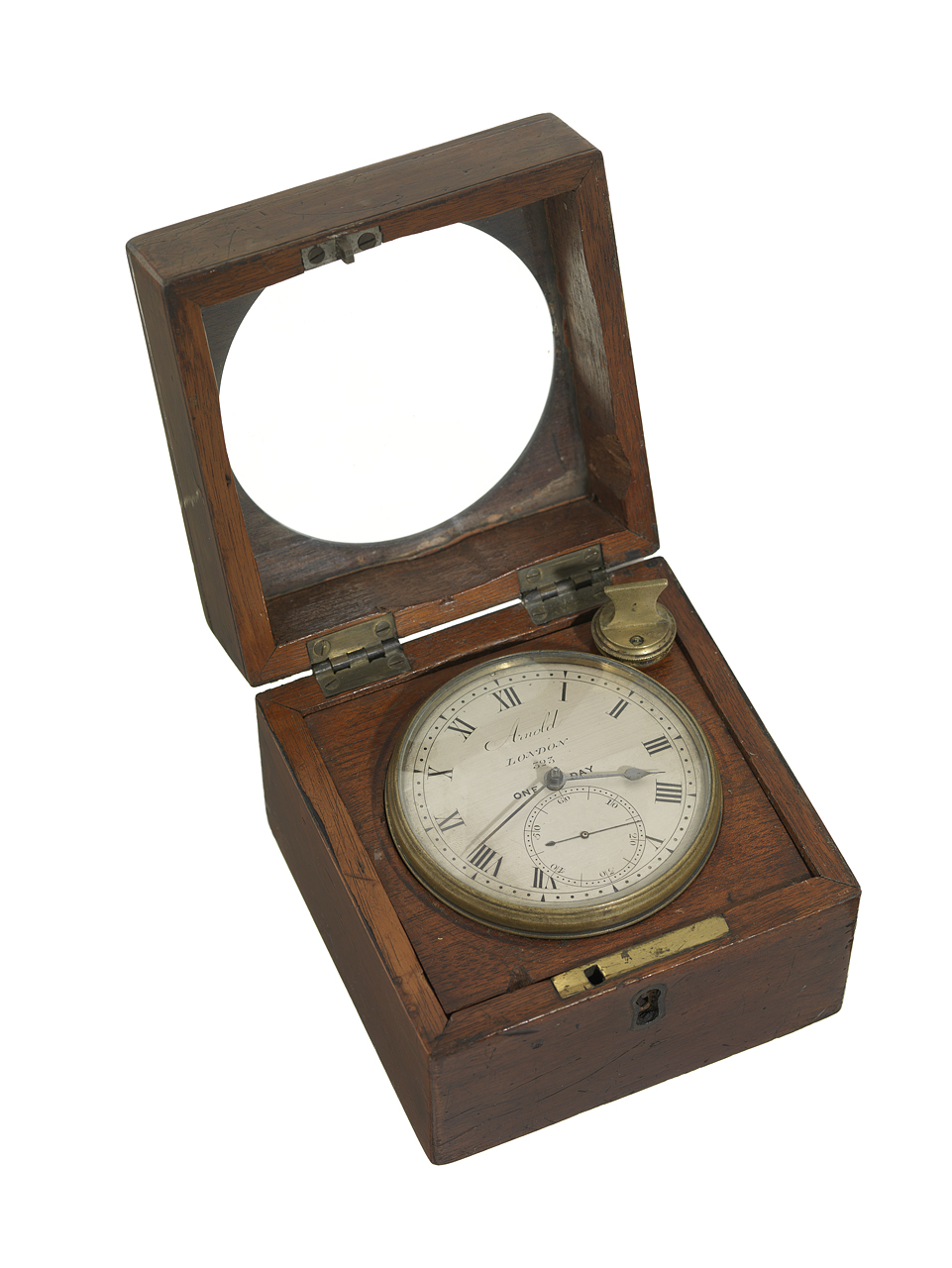 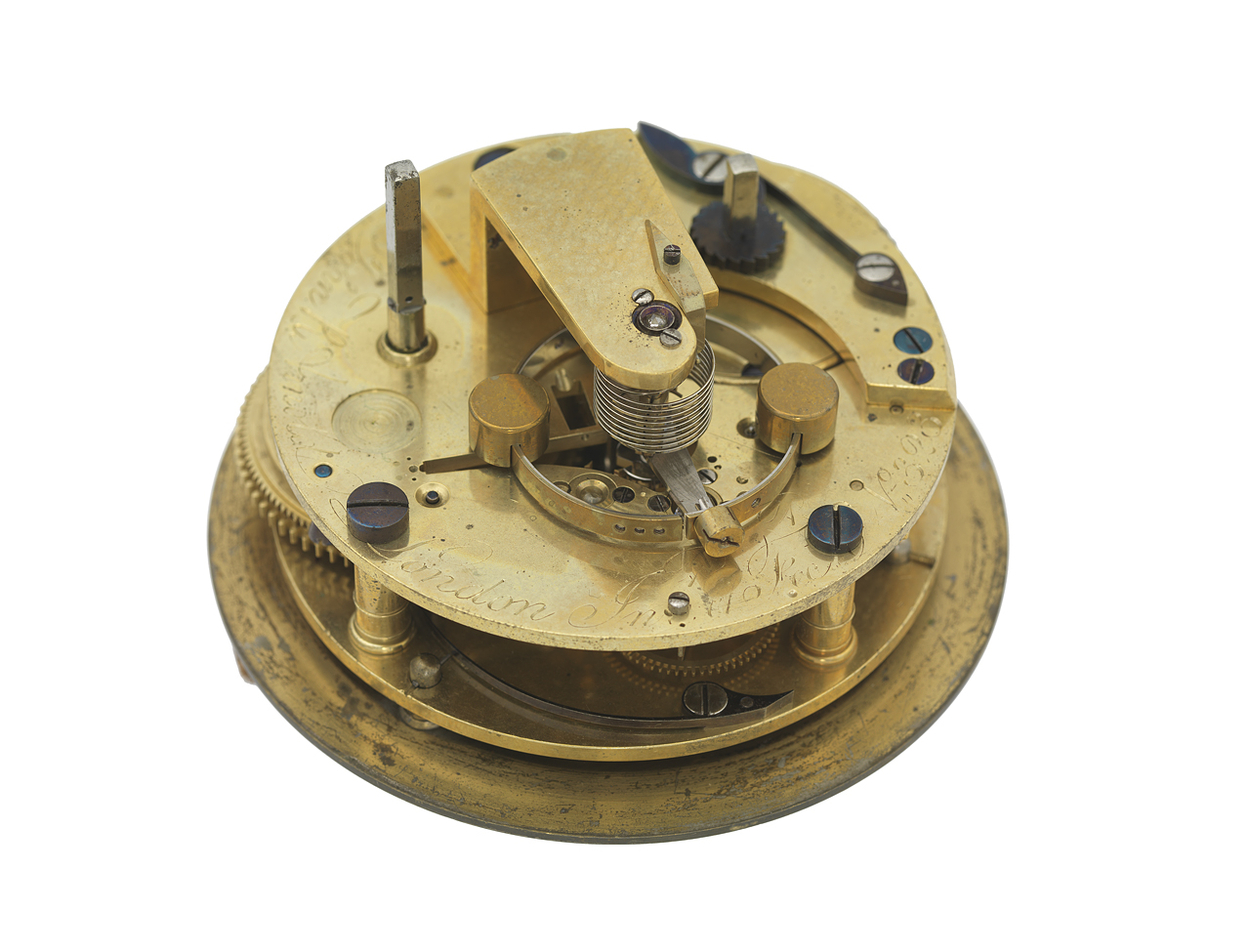 
Two-tier plain mahogany box measuring 94mm high, 121mm wide, and 123mm deep. The upper tier has a full-width circular porthole in the top with a shaped moulding down to a flat glass over the dial. The top of the upper tier is secured to the sides with four brass counter-sunk screws. The sides of both tiers are constructed with mitred joints, glued and joined with thin, angled inserts across the corners (two in the lower tier’s corners, and one in the upper tier’s corners). Inside, the lower tier is fitted with a solid mahogany block, cut out to receive the brass bowl of the chronometer. The inside was lined with green baize, now missing, and the inside of the base has two counter sunk screw holes, presumably for screws to attach the box to a wooden base of some kind. The rear right of the block is also drilled with a hole for retaining the winding key, which is a later, horizontal-ratchet type, the handle cut-down and thinned from a ‘heart-shaped’ handle. The lock on the front of the box has a simple brass escutcheon (rather oversize for the lock. There is a hole on the front of the lower tier, to the left of the lock, with a notch in the front of the block inside, to accommodate a knotted string to tie the key for the box on the front of the box. Inside the box, behind the inner block, the back is pencilled ‘3’. The underside of the box has had a green baize covering, now missing. The block inside the box contains the straight-sided, seamed, gold-lacquered brass bowl which has a small, off-set, circular recess for a winding shutter (now missing), on the flat base. There is a narrow, brass bayonet-fitting moulded bezel (3 concealed pins), with a thin convex glass over the dial. Inside, the base of the bowl has a threaded hole and a plugged hole where there was probably once a lead poising weight, and the retaining disc and return spring for the now-missing winding shutter. The sides of the bowl have a threaded and a plain hole at the ‘3 o’clock’ and ‘9 o’clock’ positions where the gimbal pivot mounting would originally have been, and a threaded and a plain hole where the gimbal-lock gate was originally positioned.

The 78.3 mm Ø, engraved and wax-filled, silvered-brass dial has three small riveted feet which fix to the pillar plate with pins and the dial itself seats in the recess in the bowl, a notch at XII and a pin in the bowl orientating it correctly. The dial has roman hour numerals and there is a large seconds dial at IV o’clock having Arabic ten-second figures with straight batons at alternate five-second intervals. The dial is signed below XII: “Arnold / London/ 323”, and: “ONE DAY” across the centre. The dial has been punched out at the back,in the area of the seconds dial, where there had probably been an engraved broad arrow. The centre hole for the seconds hand has been neatly bushed to reduce its size. The back of the dial retains its (probably original) gold-lacquering. Blued steel spade and poker-hands with a fine, blued steel pointer seconds hand with a counter-poised tail.

Full-plate fusee movement with four pillars with flanges and fins at either end and one fin in the lower middle, the potence plate originally fixed with four taper pins, later converted to blued steel screws, the barrel under a bridge (also a later change from solid potence plate). An unused screw hole and steady pin hole under the foot, and the different colour and shape of the cock, indicate the movement has had a different balance cock, earlier in its life. The current cock has also had a steady pin moved from the edge to further in, both plate and foot now being plugged. The pinned, blued steel set up ratchet wheel has on its underside a drilled dot at the corner of the hole for correct orientation with a small nick on the square, and it is scratched “1 turn”. There are also three drilled dots and an x mark by the ratchet wheel on the bridge, probably to mark set-up positions against two further nicks on one edge of the square. The general level of finish of the movement is of a reasonably fine polish, over slight vestigial scratching from the preparatory stoning, and with later (probably mid-19th century) circular hand spotting, in addition to quite a lot of later over-polishing.. The potence plate is engraved on its upper surface: “John R Arnold London Inv.t. et. Fec.t. No.323”. By the signature, there is a turned sink where the broad arrow mark has been erased. Inside the barrel is stamped “323”. The underside of the pillar plate, the potence plate, the potence, the great wheel and the train bar have four drilled dots (both plates having one dot larger than the other three). The fusee ratchet wheel is scratched: “3223” with the first 2 scratched out. The minute wheel post has been slightly repositioned, probably from new. There are two dots on the underside of the centre wheel and the fourth wheel, which may be a replacement, is scratched: “32 x [indecipherable, but probably 3]” on one crossing. The rivet of the fourth pinion is left roughly turned. The fusee cap is dot marked for the pin entry hole. The later signed blued steel mainspring has a blued steel square hooking in the barrel. There is a five-wheel train including great wheel, the fusee with Harrison’s maintaining power, originally with a fusee pipe pinned to the square (pipe now missing). The train wheels are brass with the third, fourth and escape wheels run on a bar on the pillar plate. All train holes have been plugged and re-pitched from new, as well as the maintaining power detent. A new banking piece has been fixed to the underside of the potence plate to accommodate a later arrangement of the escapement. There is a plugged hole, a large threaded hole and two empty steady holes in the potence plate where there was at least one earlier stud for an undersprung balance.

Earnshaw-type spring detent escapement with grey-finished, foot detent screwed under the potence plate and banking on a gold screw mounted on a small brass potence on the plate. The well made and finely finished detent has a gold passing spring running alongside the detent blade, and a pink jeweled, round section locking stone. The escapement has been converted at some stage, the slot remaining in the plate for the original Arnold detent, with the angled banking screw hole. The polished and grained impulse roller is unjewelled and the discharge roller has a light pink stone inset.

The standard, two-arm bimetal balance has slightly tapered steel arms. The rim segments extend fully to the opposite arm and have circular brass weights mounted about 75° from the arms. Brass meantime nuts are attached at the end of the arms, and there are three threaded holes at the ends of the rim segments for attaching additional compensation screws and a single threaded hole at the base of each rim segment for attaching an additional mean time screw. The Palladium helical balance spring has terminals on both ends, the upper terminal with a brass stud fixed to the balance cok. The jewelling, which is all in light pink stones mounted in brass settings, extends to the balance, escape wheel and fourth wheel, with endstones (faceted diamond in steel for the balance upper pivot) and the escapement parts as mentioned.

The wooden box is a later adaptation for this chronometer, perhaps in the mid nineteenth century, with the upper tier apparently having been cut down and the present top being fitted, slightly unevenly, with the four brass screws. It is in sound and clean condition with a few small knocks and dents, but is fractured across the top at the ‘9’ and ‘3’ o’clock positions, and the inner block is cracked across the key hole on the back right. The upper tier is slightly skewed in its place on the lower tier and the green baize is missing from inside the box and from the base. The right hand joints on the lower tier are slightly springing open. The lacquering is mostly gone on the outside of the bowl, but the inside, and the outside base, still retain much of what is probably original lacquer.The steel hands have probably been slightly rusty at some stage and have been rather roughly cleaned, ‘greying’ the blueing on the surface.

The dial silvering is very clean, with slight darkening between III and IIII and VIII and IX. The dial has probably been re-silvered several times in the past, as the engraving is now getting a little thin in places.

The movement is in generally sound clean condition, though it was found to be thick with old, solidified oil. When the plates were converted from pinned pillars to screw-fixing, the screw under the barrel bridge was full diameter, within a sink under the bridge. This was then altered to a smaller diameter blued steel screw projecting through the bridge. The fusee pin for hooking the chain has broken and been replaced at some stage and one of the upper escape wheel endstone screws has broken off and the head is missing. There are burrs raised under the cock foot suggesting the later balance has itself had a new staff or has had it repivoted. The movement has only been very lightly cleaned, and has been re-oiled, during inspection.

Mainspring evidently a replacement. Balance and spring, and the balance cock, have been changed at least once during the chronometers life. Originally the balance would have been undersprung, the spring studded on the plate, and was then converted to oversprung about 1850, when the escapement was converted.

Signature: “Geo Cotton Novem 1903” (scratched on inside of spring, 20cms from end)

Turns incl. terminals: 10 (c/w down)
Back to Search Results
Buy a print License an image
Share:
Link copied to your clipboard!