Skip to main content
You are here:
Home Discover our stories and collections Museum blog The Battle of Trafalgar: letters from the Lower Deck

The Battle of Trafalgar: letters from the Lower Deck

Discover some of the letters sent by ordinary sailors written before and after the Battle of Trafalgar.

Every year on 21 October we mark Trafalgar Day, commemorating the anniversary of the Battle of Trafalgar. Much celebrated in British culture, depicted in film, verse, fine art and commemorated in all sorts of media, one could be forgiven for wondering what else there is to be said about this momentous event.

I have been working on a small project to draw together letters of the 'Lower Deck', that is the ordinary sailors or 'Jack Tars' who were at Trafalgar- specifically the ones of whom Nelson 'expected' ...  Many of the common seaman weren't literate but it's surprising how many of their letters survive, in some cases written for rather than by them, so they could keep in touch with home and tell their families of their exploits- or just beg for some new hankerchiefs!

Henry Blackburn (above) was a 21 year old ordinary seaman from Ramsgate. He was on the Polyphemus at Trafalgar and wrote to his mother simply how he thanked God ' to spair me to see the 21st October over',  so happy he was to have survived. He continued 'we were a Bout the Eight ship in action... about an hour after the Royal Sovarign fired the first shots the ships was Engaged were the French Berwick and Spanish agumaut'. (AGC/B/19)

Above is one of my favourites. Thomas McKinrey (probably 'MacKenzey') was a 20 year old ordinary seaman from Southampton. Records show that he joined the Victory in September 1803 but by 1805 had actually lost track of exactly how long he had been away from home. It's revealing that after almost 2 years in the navy, he still regarded his mum as the ultimate source of what was what! It's easy to forget how we take the calendar for granted, but we can be sure he remembered the 21st of October for some time afterwards... (AGC/8/14)

Thomas Connell was from Clonmell, County Tipperary in Ireland. He joined the Dreadnought in November 1804 and he wrote to his father that he come through the battle without 'the laist hurt'. He obviouslty didn't find the naval diet as bad as we sometimes think. At the age of 29, he claimed he was 'never was better in helth since on bord of a Man a War' (AGC/C/7 ). The letters are a great counterpoint to the more numerous correspondence of officers who tended to have an eye on promotion. Written mostly before spelling became standardised, they feature very little punctuation or capital letters and it's quite easy to trip over your tongue trying to read them out loud. But the down to earth concerns of the ordinary seamen, appeals for family news, for clothing, money or even paper and pencils, make refreshing reading. They are frequently dated long after the events they describe, showing how ponderous and hit and miss the postal system could be. Martin (Archivist) 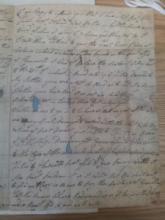 Shop
The Rules of the Game: Jutland
More than a century had gone by since the Battle of Trafalgar. Generation...