Skip to main content
You are here:
Home Discover our stories and collections Museum blog Cutty Sark in Australia

Shipowner John Willis built Cutty Sark in 1869 specifically to exploit the booming tea trade in Britain at the time. In fact, the report of her launch in the Dumbarton Herald in November 1869 notes “The Cutty Sark is intended for the China tea trade, and is expected by her owners to be one of the fastest ships engaged in that traffic”.

However, clipper ship Cutty Sark was never able to realise her owner’s aspirations of being the fastest ship on the tea run. The Suez Canal opened just five days before the ship’s launch which meant the steamers entered and later dominated the tea trade. Sailing ships like Cutty Sark were forced to find alternative cargoes. 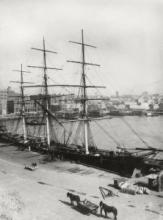 In 1883, the ship entered the regular Australian wool trade and quickly established herself as one of the fastest of the clippers. Cutty Sark loaded around 5,000 bales of wool from Sydney, Newcastle NSW and Brisbane, making 12 voyages in the wool trade in total. The voyage was a challenging one, heading out to Australia via Cape of Good Hope, before braving the Roaring Forties and Cape Horn on the return leg. Cutty Sark regularly made the best passage of the season and under her last master, Captain Richard Woodget, her name became synonymous with fast passages.

Captain Woodget commanded Cutty Sark 1885-1895, and with Woodget at the helm, Cutty Sark set record passages back from Australia – her fastest being 73 days from Sydney to London.  Cicely Fox Smith described the partnership as follows: “[Woodget] had the coolness, the seamanship, the iron nerve requisite to bring out the best in such as ship as the Cutty Sark; and she for her part was just such a staunch, trustworthy little ship as his heart desired”[1]. 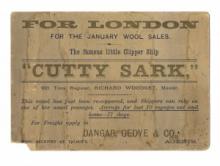 Advert for homeward journey from Australia to London

Owner John Willis took every opportunity to celebrate his ship’s successes (as can be seen in his advertising), and Australian newspapers regularly reported on Cutty Sark’s fast passages which helped secure her fame across the world:

“The Cutty Sark – Another Splendid Performance

For a ship of 20 years of age, the composite-built little ship Cutty Sark has a record as a sailer not eclipsed by any sailing vessel afloat. She can sail rings round quite half the ships of more recent build and there are few steel or iron clippers capable of showing their heels today. This time she is from London again, 75 days from the Lizard to Sydney, or 80 days from London Docks”