Skip to main content
You are here:
Home Discover our stories and collections Museum blog The Psychic Search for the Franklin Expedition

The Psychic Search for the Franklin Expedition

As we approach Hallowe'en, Shane McCorristine, author of The Spectral Arctic, discusses the role psychics and the supernatural played in the story of the lost Franklin expedition.

The 'power' of the supernatural

People who claim supernatural powers of knowledge are quick to take advantage of the information vacuum surrounding unexplained disappearances. From the abduction of the Lindbergh baby to the vanishing of flight MH370, psychics and clairvoyants have offered their “location services” to those seeking to connect with the missing.

The loss of the Franklin expedition inspired an outpouring of psychic activity in Britain ranging from national prayer sessions to spiritualist séances. In 1849 and 1850, when the first Admiralty search and rescue missions failed to locate HMS Erebus and Terror, Jane Franklin turned to psychics, crystal-gazers, and clairvoyants to shed light on the mystery. These were generally young illiterate women who were placed into trances by male mesmerists and “sent” to the Arctic to report on the condition of the explorers and the location of the ships.

For example, in Liverpool a domestic servant named Sarah visited Franklin in the Arctic and reported him to be

“poorly and tired, and almost worn out with hopes deferred, but his men console him and behave nobly”.

Around the same time another Liverpool servant named Jenny was sent on an “aërial journey” with the assistance of a small drinking glass that, when rested on the top of her nose, strengthened her vision. Jenny described reaching a cold place with ice, “such as you never saw”, and met with the expedition, which was in a sorry state but had enough provisions for another year. Jenny suggested that three ships laden with salt should be dispatched to melt the ice that imprisoned them:

“I wonder they don’t try that. But they are a set of stupid blockheads”, she noted.

The most celebrated clairvoyant of them all was a young woman named Emma, the “Seeress of Bolton”. In her séances she stated that Franklin was alive and “comparatively well” although his cheeks were sunken. Using a sample of Franklin’s hair to connect with him, she said he was in “good hope of getting to England in nine months and a half”, although this was not given as a prophecy, but as “the impression on his mind, with which she professed to have some mysterious means of communication” 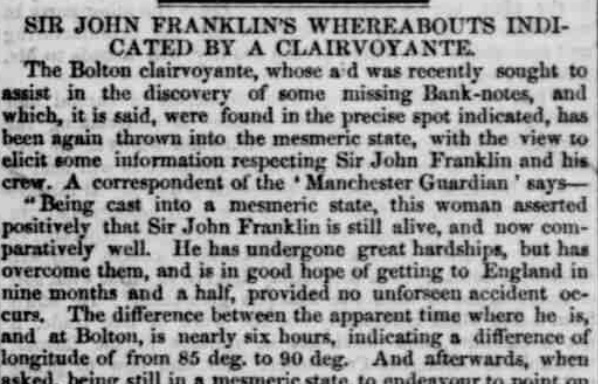 Emma’s visionary journeys were widely discussed in the press and were seen by Lady Franklin and several naval experts as complementing, rather than undermining, official naval and land journeys in search of the expedition. One person greatly impressed by her claims was Captain Alexander Maconochie, a friend of the Franklin’s who had served as secretary of the Royal Geographical Society in the 1830s.

Maconochie attended some of Emma’s séances and sent reports of them to the Admiralty. He was keen to get geographical details from her and so encouraged her to use maps of the Arctic regions. At first, Emma pointed to the north west side of Hudson Bay, but on another occasion she she decided the expedition was at the Parry Islands (now the Queen Elizabeth Islands). Not surprisingly, at this point in the document Maconochie sent to the Admiralty a sceptical reader scribbled “Gross Humbug” in the margin.

Of course we now know that Franklin had died years before the clairvoyants “visited” him in the Arctic, making their visions at best, fantasies, and at worst fraudulent inventions. So what does the psychic search for the lost expedition tell us? This episode demonstrates two ways that the culture of Arctic exploration was transformed by the Franklin disappearance.

Firstly, whether in ballads, panorama shows, or séances, emotions were now a key force for people to use when imagining or marketing Arctic exploration. Psychics and their handlers knew this, as did Lady Franklin who used the supernatural as a means of keeping those in Britain and those in the Arctic in the same emotional world. The relationship between Franklin and his wife was imagined in sentimental terms as a “love no Arctic bound” and they were literally objectified as figurines by a Staffordshire earthenware company. 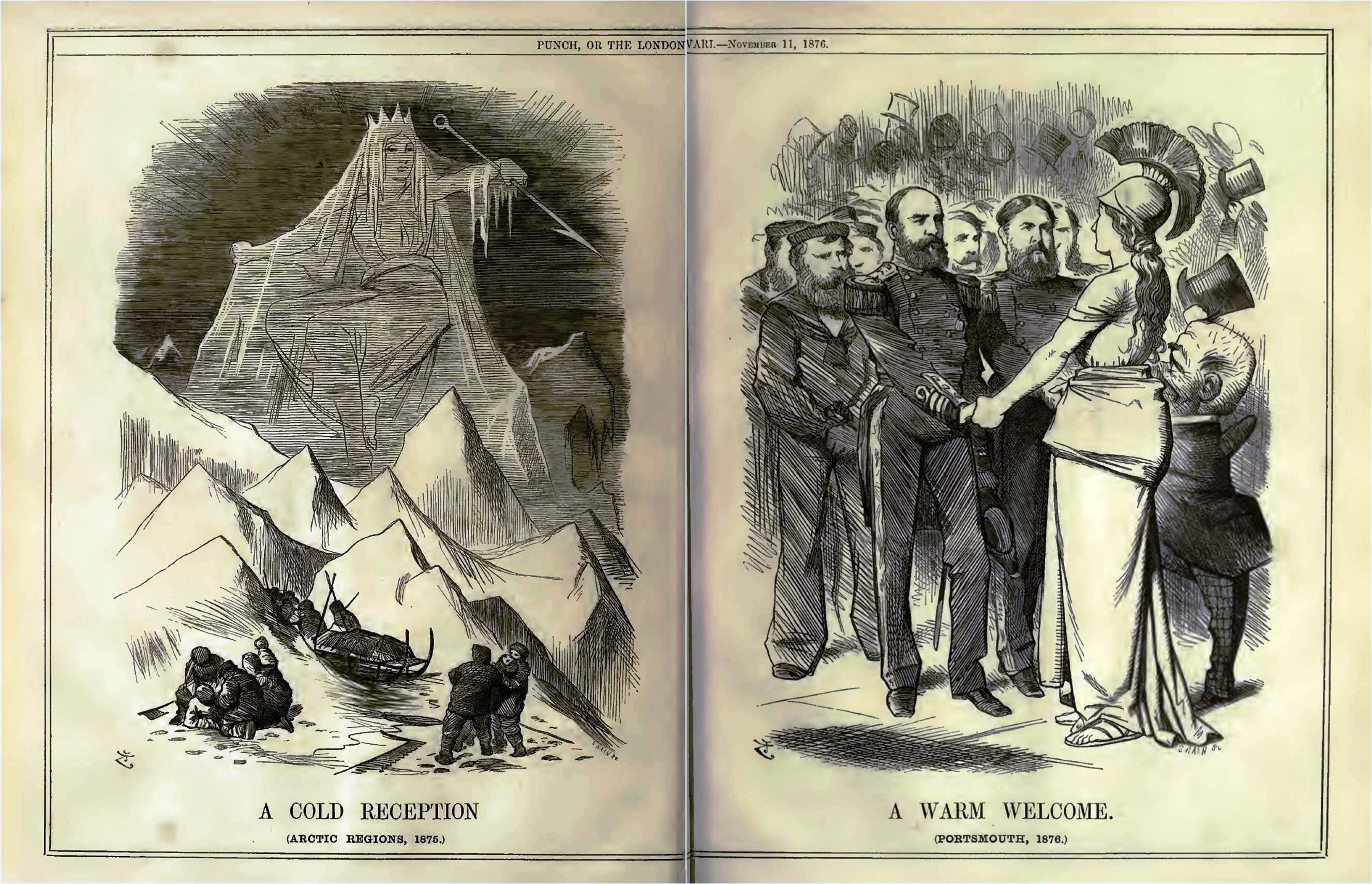 Secondly, although they had no formal access to the exclusively male expeditions, from the 1840s women began to feature as ghostly presences in the Arctic, whether in fiction, visual culture, or psychic travels. This should encourage us to examine in more detail the role of gender in the Arctic imagination. Why, for instance, was the Arctic frequently visualised as an “Ice Queen” by the Victorians, pushing back the chivalrous men who were merely serving Britannia? Ultimately, the presence of illiterate young women in the story of the Franklin expedition means that we need to make more room for the role of non-explorers in popular understandings of Arctic exploration.

Discover the shocking story of Franklin's final expedition at the Death in the Ice exhibition at the National Maritime Museum in Greenwich, London. Until 7 January 2018.

Franklin: Death in the Ice exhibition

Shane McCorristine is a Research Associate at the Humanities Institute, University College Dublin. His book “The Spectral Arctic: A History of Dreams and Ghosts in Polar Exploration” is forthcoming in 2018 with UCL Press. His website is shanemccorristine.net.

Inside the exhibition: Death in the ice

Franklin: The Reason Why