Skip to main content
You are here:
Home Discover our stories and collections Museum blog Strange Creatures: The Art of Unknown Animals at the Grant Museum

Strange Creatures: The Art of Unknown Animals at the Grant Museum

Today's guest blog was written by Jack Ashby, Manager of the Grant Museum of Zoology and curator of the Strange Creatures exhibition. He talks to us about the appearance of Stubbs' kangaroo and the ways in which imagery has been used to bring newly discovered animals into the public eye.

The National Maritime Museum’s painting of a kangaroo by George Stubbs has hopped its way across London to star in Strange Creatures: The Art of Unknown Animals, a new exhibition at the Grant Museum of Zoology at University College London.

The natural history of art; the art history of nature The exhibition explores how newly discovered animals are communicated to the public back home. By examining the world of animal representations, Strange Creatures investigates how imagery has been used to bring newly discovered animals into the public eye. From the earliest days of exploration, visual depictions in artworks, books, the media and even toys have been essential in representing exotic species that are alien to people at home It is centred Stubb’s kangaroo painting, which resulted from Captain Cook’s first Pacific voyage of discovery. It is the first painting of an Australian animal in Western art. As I wrote in the exhibition text: This painting helped begin Europe’s relationship with Australian wildlife. Commissioned by legendary naturalist Joseph Banks, painted by celebrated animal artist George Stubbs, and based on findings from Captain Cook’s famous voyage, this kangaroo truly captured the country’s imagination. Stubbs’ image became the archetype for representations of kangaroos for decades – reproduced and refigured prolifically. It may not be anatomically perfect, but this is how Britain came to know the kangaroo. It is an emblem of the age of exploration at the historical threshold of the European occupation of Australia. Nothing was ever the same again. This exhibition represents a chance to see the artwork among other animal depictions from the time of their earliest European encounters. 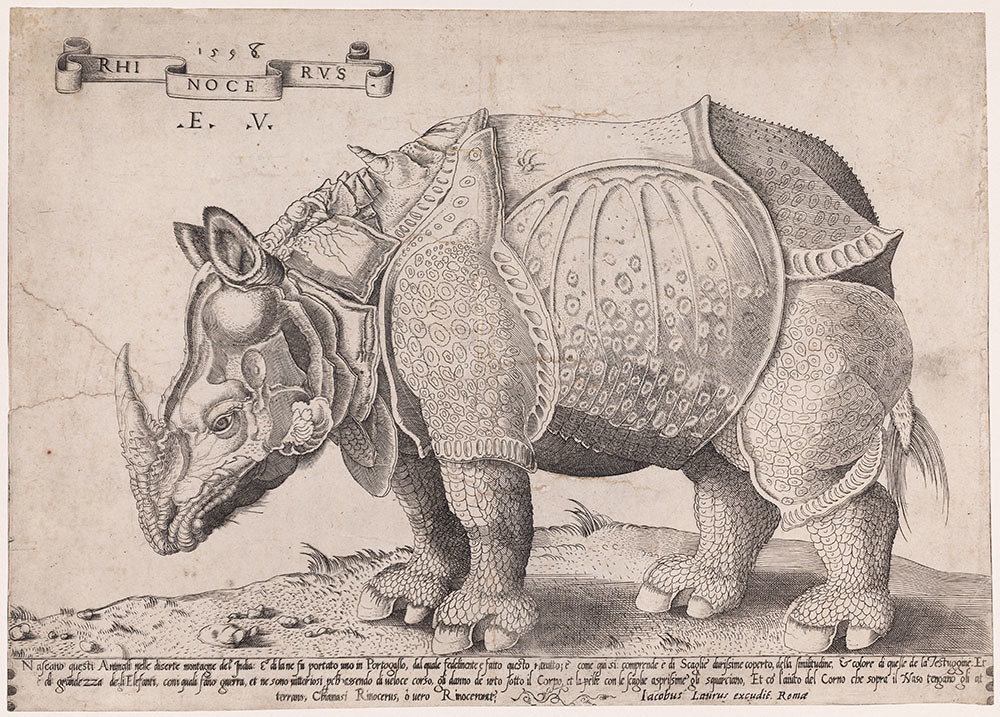 A Rhinoceros, Enea Vico (after Albrecht Dürer), 1558. A copy of Dürer's rhino, which was based on a written description. It has fantastical armour and a strange shoulder horn, and became an enduring image of rhinos for Europeans. (C) UCL Art Museum, University College London

Many of the artworks on display were created by people who had never seen these animals in the flesh, either working from explorers’ accounts, or copying (and potentially embellishing) images produced by others. Strange Creatures from many angles Most of the exhibition’s displays were developed by palaeontologists and by historians of science, exploration and art from University College London. They have investigated the theme of animal representation from the perspective of their own disciplines, and developed sections of the exhibition around them. Modern mechanics and medieval manuscripts These researchers’ stories include medieval accounts of exotic creatures, art from the ages of exploration and empire, sailors who faked “dragon” specimens by manipulating dried fish, contemporary knitted craft taxidermy and twenty-first century reconstructions of dinosaurs. Together they explore how unknown animals are communicated to the wider public. 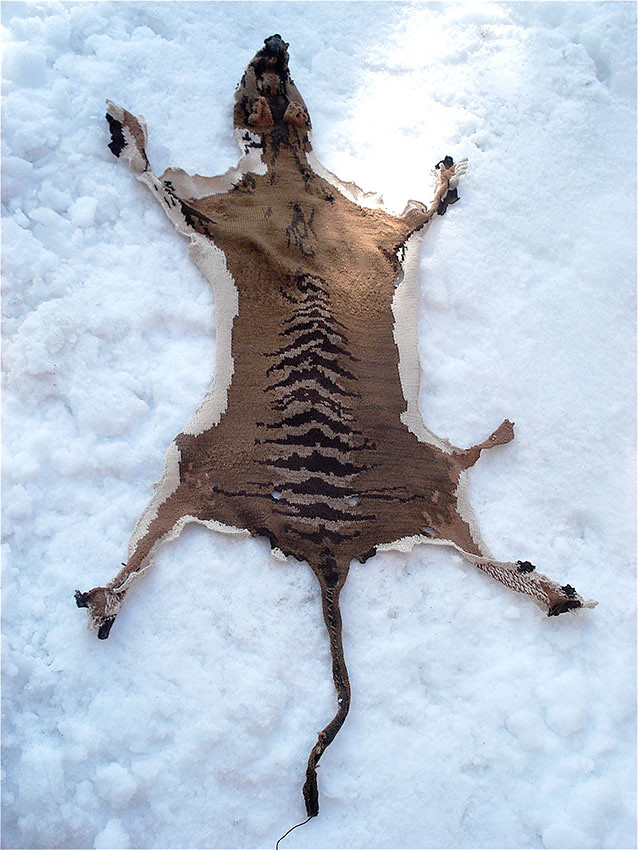 Tasmanian Tiger #3, Ruth Marshall, 2015. A knitted thylacine pelt. Tasmanian tigers were hunted to extinction in 1936 because of a powerful farming lobby. Artists like Ruth Marshall use the familiar, unchallenging practice of knitting to raise controversial issues like habitat loss and extinction. The movement is called craftivism. (C) Ruth Marshall.

It’s been such a fascinating exhibition to pull together – being able to work with a group of historians, artists and scientists from such a diverse set of disciplines has allowed us to tell so many stories about the topic of animal representations. It’s also very exciting to see these incredible objects, like Stubbs’ kangaroo, prints and drawings from UCL Art Museum and Captain Cook’s handwritten voyage accounts (from UCL Library Special Collections), displayed alongside the Grant Museum’s animal specimens. Strange Creatures: The Art of Unknown Animals runs until 27 June 2015 and is free entry. Though Stubbs' kangaroo is now touring the country, we're still examining similar themes in our free exhibition The Art and Science of Exploration at the Queen's House.

Shop
Ocean Sticker Safari
Discover the oceans of the world in this delightfully silly sticker book,...