Skip to main content
You are here:
Home Discover our stories and collections Museum blog Women's History Month - Emma Hamilton and the power of a stereotype

Women's History Month - Emma Hamilton and the power of a stereotype

Lady Hamilton's historical significance is foregrounded on the occasion of Women's History Month.

Emma Hamilton was born into poverty in 1765 at Ness in Cheshire. Her given name was Amy Lyon, daughter of Henry Lyon a blacksmith who died when she was an infant. From such beginnings, one of the great female lives of the eighteenth century rose and fell. Emma, as she later became, rapidly ascended to national and international fame as a model, performer and interpreter of neo-classical fashion. In an age when people tended to remain fixed in the social categories in which they began their lives, she crossed boundaries of all kinds, broke through barriers and paid a heavy price both at the time and in retrospect.

Within the public mind, however, she often occupies a passive and supporting role – presented as the model to painters such as Romney, the plaything of urbane connoisseurs such as Charles Greville and William Hamilton or – and this is still more the case – partially obscured by the reputation of her lover, Britain’s greatest naval hero, Horatio Nelson. Emma has many advocates and biographers who have blazed this trail before me. However, on the occasion of this year’s women’s history month (and both the bicentenary of Emma’s death and the 250th year since her birth), I would like to join them in stressing that she should be seen as an active and influential historical actor in her own right. The arc of her life – her ambitions, creative endeavours, successes and hardships – should be viewed through this lens.

When Emma is remembered as Nelson’s lover and mistress, an old stereotype emerges in which a woman’s reputation is connected to her sexuality rather than to her achievements (or that loaded eighteenth-century word, ‘accomplishments’). This two-dimensional and thoroughly partial estimation – one that makes her noteworthiness conditional on his, and irrelevant without it – was seeded during her own life, and grew across the nineteenth and early twentieth centuries. As the media fortunes of many distinguished women today reveal, we have by no means said goodbye to this disempowering perspective. So, I am using this blog to do what curators of naval history at the National Maritime Museum should doubtless be cautious at attempting, by placing Nelson (albeit temporarily) in the background. This is not, of course, done with malice – there is no axe here to grind against him. Nelson’s relationship with Emma shows every indication of being deeply felt and sincere and, moreover, he appears to have been a man who rejoiced in her brilliance rather than being intimidated or offended by it. The difficulty lies with his reputation, and how that has been constructed and reconstructed over time.

Nelson’s ability to overshadow from beyond the grave is something to which many of his naval officer peers, forebears and successors might be called upon to testify; but there was also a marked tendency among his Victorian chroniclers to ascribe Nelson’s failings to Emma’s perceived faults. She became a complication and a distraction in a life of masculine accomplishment and greatness; the frivolous to Nelson’s serious; the domestic to his far-flung; and the self-obsessed to his dutiful. Such distortions need to be replaced with the realities and complexities of a deeply fascinating life, and one whose noteworthiness long preceded Nelson’s arrival on the scene.

In order to do so, we could take some inspiration from Emma’s famous and novel ‘attitudes’ – those fluid tableaux vivants in which she assumed the guise of one classical or historical figure after another in rapid succession, making the very most of each in its turn. This was what she also did in life. Rather than the single identity of ‘mistress’, it would therefore be far more accurate to say that she was many things at different moments: servant, seductress, muse, student, celebrity, socialite, singer, performer, lover, politician, mother, icon, mourner and pauper. In this month, and in Emma’s commemorative year, it is worth emphasizing that a single label rarely does justice to anyone. 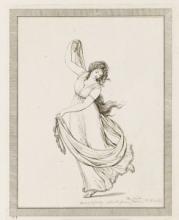 Lady Hamilton performing one of her ‘attitudes’, engraving after Frederick Rehberg, 1794 (NMM, PAD3221)

Read more about the life of Emma Hamilton.

Special
Women's History Month 2020
This March, join us to celebrate the women who made history and are making...