Skip to main content
You are here:
Home Discover our stories and collections Explore by theme Why was Apollo called Apollo? | The history of spacecraft call signs

Why was Apollo called Apollo? | The history of spacecraft call signs

A call sign is a label given to a vehicle, mission or person in internal communications during missions to space.

Different nations and missions use call signs differently. Call signs that were used in significant missions have gone down in history, with the code words becoming common parlance.

American call signs are used to refer to vehicles, missions or projects. Throughout NASA’s history, there have been phases where the call sign was decided upon by the crew itself. Traditionally they have not been as regulated as other call signs, such as the ones used for aircraft. Often the names take inspiration from what the mission symbolises, or a famous voyage from history or popular culture.

Originally Project Mercury, the first human spaceflight programme run by the United States, was named Project Astronaut. However, Dwight D. Eisenhower, the US President at the time, felt that this gave too much prominence to the astronauts, and so the name was changed.

The name Mercury comes from classical mythology – Mercury is a Roman God.

Project Mercury also used call signs that referred to individual spacecraft. These names were chosen by the astronaut in command of each craft. Each call sign followed the same pattern: a word followed by the number seven. This number represented the seven original astronauts who made up Project Mercury. Some of the words used for these call signs included:

The astronauts of NASA’s second human spaceflight mission, Project Gemini, were not officially allowed to name their spacecraft. Instead each individual spacecraft was simply referred to as ‘Gemini’ followed by the number of the mission.

However, Gemini 3 command module pilot Gus Grissom nicknamed his spacecraft Molly Brown after the Titanic survivor and New York socialite. Naming his craft after a Titanic survivor was an ironic reference to Grissom's experience piloting Project Mercury spacecraft Liberty-Bell 7, which had sunk after splashlanding back on Earth. When NASA suggested Molly Brown might be an inappropriate nickname, Grissom offered to name it Titanic instead. After this suggestion NASA relented: Molly Brown was a lot more appealing as a nickname.

Although Project Gemini was named after the constellation - pronounced ‘jeh-min-eye’ - NASA declared the official pronunciation of the operation to be ‘geh-mih-nee’.

Project Apollo kept up the trend of taking inspiration from classical mythology: Apollo was a significant God to both the Greeks and the Romans.

For the Apollo 7 and 8 missions, call signs were limited to simply mission name and number. However, in 1969 the Apollo 9 mission used two different spacecraft: the lunar module and the command module. For this mission and those that followed therefore, it became necessary to give each part of the spacecraft individual call signs. The crew for each mission was responsible for naming both the command and lunar module. 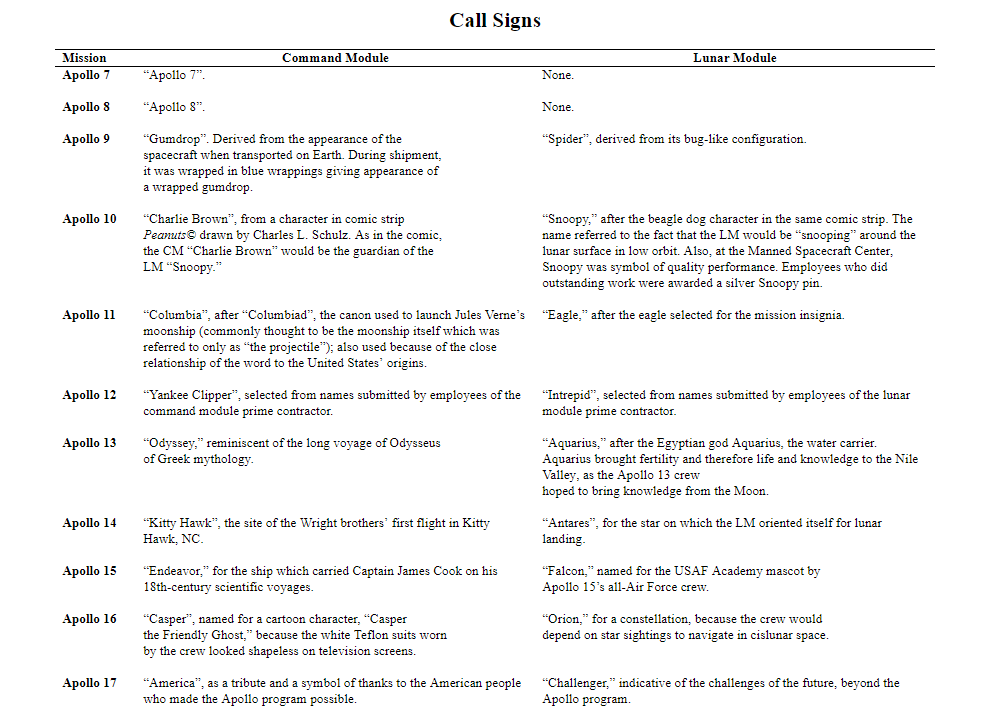 Originally the crew of Apollo 11 named the command module Snowcone and the lunar module Haystack, based on the shapes of the vehicles. However, NASA felt that these names did not inspire much confidence in the spacecraft or the mission. They were renamed Columbia and Eagle, respectively.

Find out more about Apollo 11

Find out more about Apollo 9 and 10

Whilst the call signs of the spacecraft were given special names, the mission control call sign was much simpler. Since the Gemini 4 mission, the control centre for NASA missions had been housed in NASA’s Manned Spacecraft Center, which in 1973 was renamed the Lyndon B. Johnson Space Center. In radio communications however the base was simply referred to as Houston, as it was located in the city of Houston in Texas.

Russian missions don’t have individual names for their spacecraft. Instead, their call sign often refers to the type of spacecraft being used followed by its mission number. Soviet and now Russian call signs are given to individual cosmonauts, and are not disclosed publicly before launch. As a cosmonaut goes on different missions or pilots various spacecraft over time, their individual call sign remains the same.

The first man in space, Yuri Gagarin, was a Russian cosmonaut. His call sign was ‘Kedr’ which translates as 'Cedar'. The innocuous sounding call sign meant that anyone listening in to conversations about the mission would not immediately know who or what was being referred to.

Eagle was a call sign popular across nations. After Gagarin’s journey into space, the Soviet Vostok missions featured call signs named after birds. Pavel Popovich and Andriyan Nikoayev were known as ‘Sokol’, meaning falcon, and ‘Berkut’, meaning golden eagle, in their Soyuz-3 and Soyuz-4 joint mission.

Visit the Yuri Gargarin statue at the Astronomy Centre

Shop
Moongazing: Beginners Guide to Exploring The Moon
An in-depth guide for aspiring astronomers and Moon observers from the Royal...

What do astronauts eat in space?