The Duke of Edinburgh had a long and very committed involvement with Royal Museums Greenwich.

Prince Philip remained actively engaged with and gave his unique support to the National Maritime Museum and the Cutty Sark for over 73 years, quite an astonishing feat in itself.

The Duke became a Trustee of the National Maritime Museum in 1948, becoming the Museum’s ‘senior Trustee’ in 1974 and assuming the role of our first Royal Patron in 2000. In all that time, he amassed a remarkable knowledge of the Museum’s activities and achievements, often able to recall experiences from our past to assist decision-making in the present. 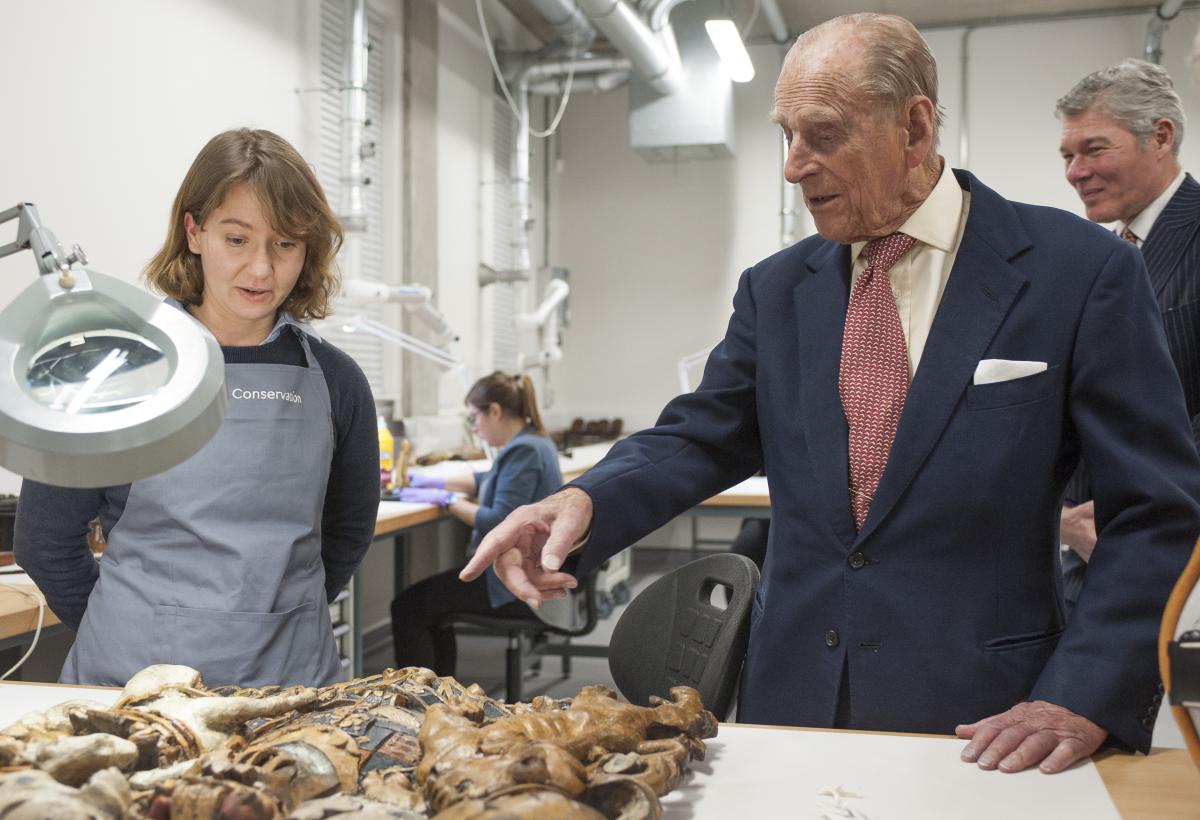 Throughout his period as both Trustee and Patron, the Duke of Edinburgh readily gave the Museum public support, from the opening of the Octagon Room at the Royal Observatory in 1953, through to the unveiling of the Prince Philip Maritime Collections Centre in 2017 (pictured), named in recognition of his personal contribution to the Museum.

It is fitting that the opening of the new facility was his last visit to Royal Museums Greenwich before retirement.

As a Trustee, His Royal Highness regularly attended board meetings, offering influential suggestions on, amongst other subjects, acquisitions, where he was particularly keen to ensure our approach combined modernity with the historic; and the presentation of displays for general interest – particularly for young people, rather than specialist audiences.

There was a personal aspect to the Duke of Edinburgh’s board work too. When Admiral of the Fleet Lord Lewin became Chair of Trustees of the National Maritime Museum, a reunion of old shipmates sparked a formidable partnership.

Prince Philip had become a midshipman in the Royal Navy as a Prince of Greece in January 1940. At the time Greece was not actually involved in the Second World War, and so Prince Philip was initially posted to the Far East.

On his birthday in 1940 however, Greece was invaded by Italy. The Admiralty concluded that it was right and proper that he be sent to the frontline, and so Prince Philip joined HMS Valiant in Alexandria in January 1941.

There he met Terence Lewin, senior midshipman of the Valiant's gun-room. They became friends immediately, kindling a lifelong relationship until Lord Lewin’s death in 1999. The Museum benefitted particularly from their combined firepower when the Neptune Court capital project hit a bump. The pair were able to guide the project back on track, not simply because of who they were but also due to their combined influencing skills and abilities.

The importance of the role played by the Duke of Edinburgh in the life of the Cutty Sark cannot be overestimated.

He was instrumental in the Ship coming to Greenwich in 1954 and its continuing preservation, including another major conservation project that completed in 2012. It was he who made Greenwich the home of the Monument to British Seafarers Naval and Mercantile, a memorial to those who have died in the service of the nation.

He was especially pleased to see Cutty Sark finally become part of the national collection in 2015, when the Ship and the National Maritime Museum were joined under the banner Royal Museums Greenwich.

At the commemoration of his 60th anniversary of his association with the Museum, Prince Philip spoke fondly and proudly of our achievements over the years. His mischievous humour came to the fore as he teased those present with the thought that, when he started, the labels were too small to read and the lighting too dim to see by. Tongue in cheek, he declared how pleased he was to see how things had improved.

In response to the news of his sad passing, flags at the National Maritime Museum, Royal Observatory Greenwich and the Cutty Sark are being flown at half-mast until after the funeral.

The Queen's House in Greenwich is one of the buildings which will be lit purple until Saturday evening in honour of the Duke of Edinburgh. 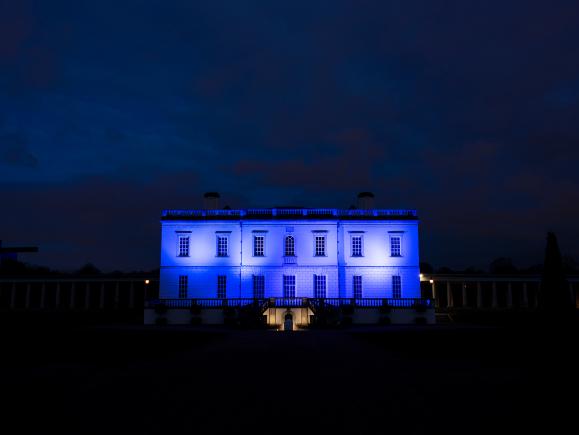 Prince Philip was instrumental in bringing Cutty Sark to Greenwich in 1948. Visitors to the borough at night will be able to see the Ship's figurehead 'Nannie' lit in purple until the Duke of Edinburgh's funeral. 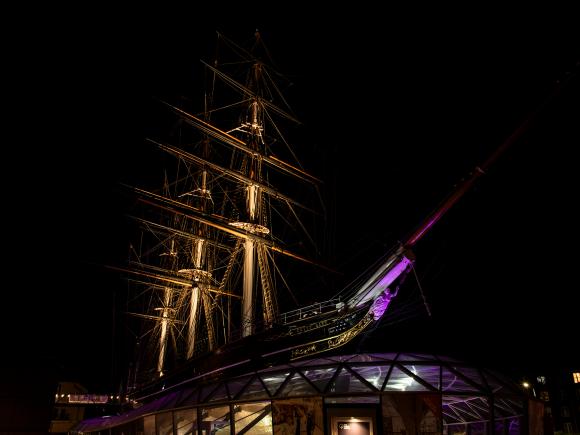 The large propeller inside the National Maritime Museum's main hall is also lit in purple. The bronze-alloy propeller was made for a Type-23 frigate, the core warship of the Royal Navy's surface fleet. They are often called 'Duke-class' frigates, as they are all named after British dukes. 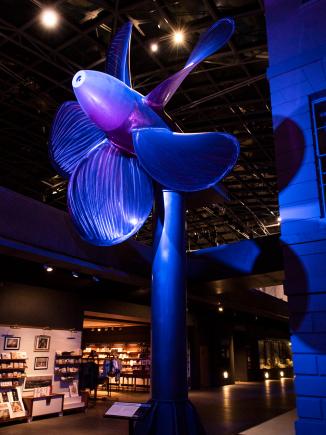 The Queen’s House, Neptune Court propeller and the Cutty Sark are being lit in purple in his honour, again until after the funeral. A video presentation can be seen in the Sammy Ofer Wing foyer and online.

Staff on duty have been provided with black armbands, and we are in cooperation with the Royal Borough of Greenwich in particular, who are also flying their flags at half-mast and lighting the Town Hall in purple.

On Friday 16 April, the Royal Borough of Greenwich held a special memorial event on board the Cutty Sark for the Duke of Edinburgh. A live recording of the ceremony is available to watch above. 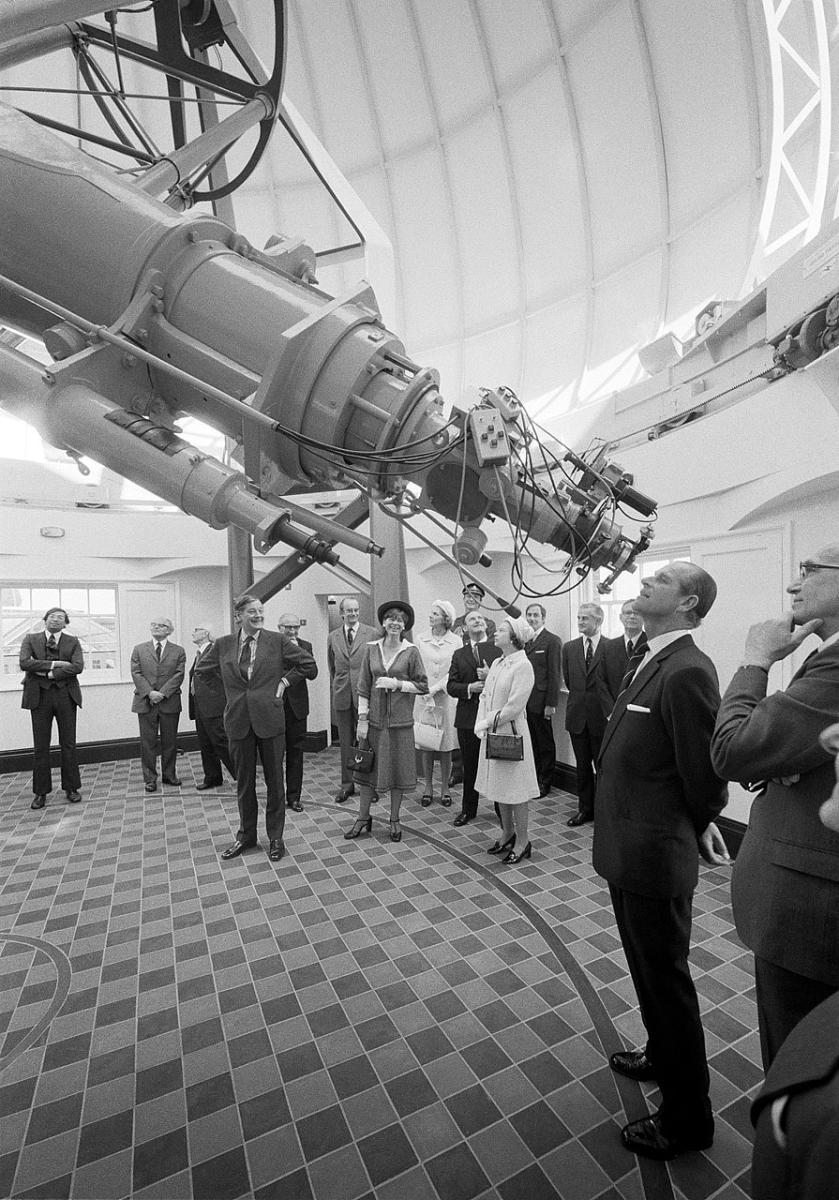 National Historic Ships UK are acting in tandem with the Museum, providing advice in respect of the dipping of ensigns and house flags on the day of the funeral to all owners of vessels in the National Historic fleet.

One particular story that illustrates the Duke of Edinburgh’s approach to institutions and their people involves Curator of Ship Models Simon Stephens, who joined the National Maritime Museum in 1979 as a very young man. Almost immediately after joining, he was presented to the Duke of Edinburgh as the Museum’s first holder of his scheme’s Gold Award.

Slightly embarrassed by this early accolade, a few years later Simon found himself once more presented to the Duke, after Prince Philip had heard that Simon had co-led a Duke of Edinburgh Gold Expedition to walk the Inca Trail in Peru. The Duke remembered the association and took a genuine interest, asking Simon to write up an illustrated report for his personal inspection.

We remain profoundly grateful for the Duke of Edinburgh’s commitment to Royal Museums Greenwich, and for his dedication and service to national life.

To quote our Deputy Lieutenant and Curator Emeritus Pieter van der Merwe, himself quoting Shakespeare: ‘We shall not look upon his like again’.

Members of the public have been asked to consider making donations to charity instead of leaving floral tributes in memory of the Duke of Edinburgh. If you would like to help continue the Museum work that he supported, please find our donation page below. To all those who have already sent gifts and messages, we thank you.
Support his legacy