What is an eclipse?

An eclipse in astronomy happens when a body comes between us and a light emitter, so that we can no longer see the source.

For example, when the Moon aligns between us and the Sun, it blocks out sunlight and casts a shadow over part of the Earth.

An eclipse can also occur when a body comes between a light source and the body that the light is illuminating, so that we no longer see the illuminated body.

What is a total solar eclipse?

An eclipse of the Sun occurs when the Moon comes directly between the Sun and the Earth so that the Earth lies in the shadow of the Moon.

Because the Moon is much smaller than the Earth, its shadow only covers a small part of the Earth's surface. That means that a solar eclipse can only be seen from a certain region of the Earth.

A total solar eclipse can be viewed from the darkest part of the Moon's shadow (its umbra); areas covered by partial shade (its penumbra) witness a partial eclipse.

What is an annular eclipse?

When the Moon is not at its closest to the Earth, its apparent diameter is less than that of the Sun. Even where the Moon's disk obscures the Sun centrally, the outer ring of the Sun's disk is still visible. This is called an annular eclipse.

What is a lunar eclipse?

Find out more about lunar eclipses

When is the next solar eclipse in the UK?

There are between two and five solar eclipses each year with a total eclipse taking place every 18 months or so.

Total solar eclipses are seen every 400 years from any one place on the surface of the Earth.

Solar eclipses in the UK

When was the last total solar eclipse in the UK?

The last time the path of an eclipse's totality went over the UK was in 1999. This was one of the most viewed total solar eclipses due to its path falling on areas of high population density.

However, many areas of Western Europe were affected by poor visibility due to clouds. In some places, the clouds frustratingly parted after the eclipse had passed, but others were luckier with the clouds parting just in time.

Many people went to view the eclipse in Cornwall, the only place in the UK to witness totality, with the BBC broadcasting from Cornwall's western end where the eclipse would come first.

How can I see an eclipse?

As always, with any observing event involving the Sun, it should never be looked at directly without the appropriate filters.

The Royal Observatory will be live streaming the next solar eclipse in the UK on YouTube and Facebook, featuring state-of-the-art telescopes and expert commentary from Observatory astronomers.

If you want to look at an eclipse directly and safely there are a couple of options.

How to make a pinhole projector

Judges' comments: One thing you often notice during an eclipse is how quiet everything becomes. Solar eclipses are calm, serene moments. This stripped-back image captures that serenity perfectly. The calm glow behind the silhouetted hills is all that is needed. 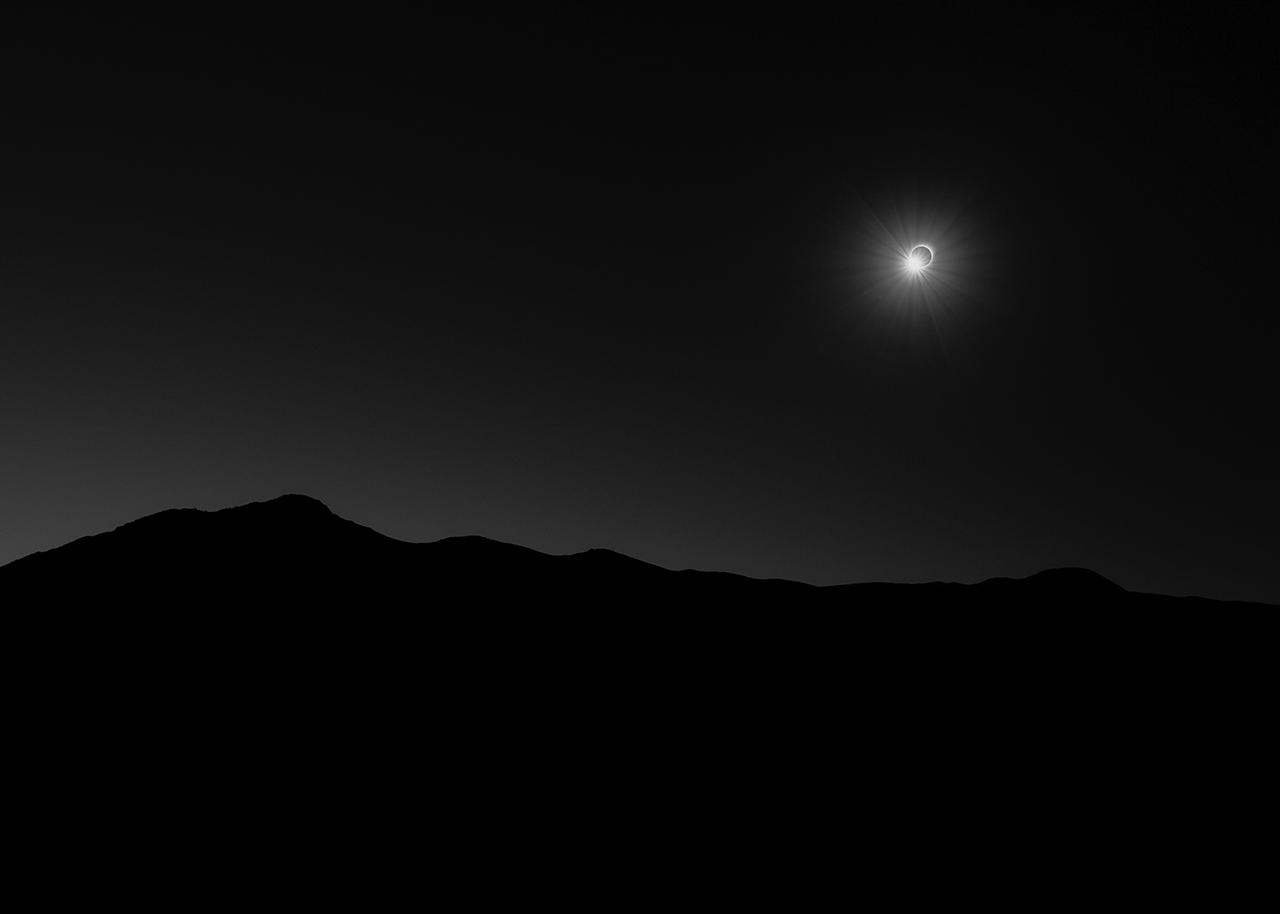 2 / 3
The Diamond Ring by Melanie Thorne

Melanie says: A group of us went to Indonesia primarily to view the eclipse, but saw many other amazing things too, such as volcanoes and orangutans. We were very lucky. The wet weather cleared in the morning to reveal a hot sunny day, before cloud again came over towards the end of the eclipse. This was my first ever total solar eclipse, and so the first time I have ever taken a photo of it. I am so glad I was able to take a picture of totality and the diamond ring. What an experience it was, one I most certainly will never forget. 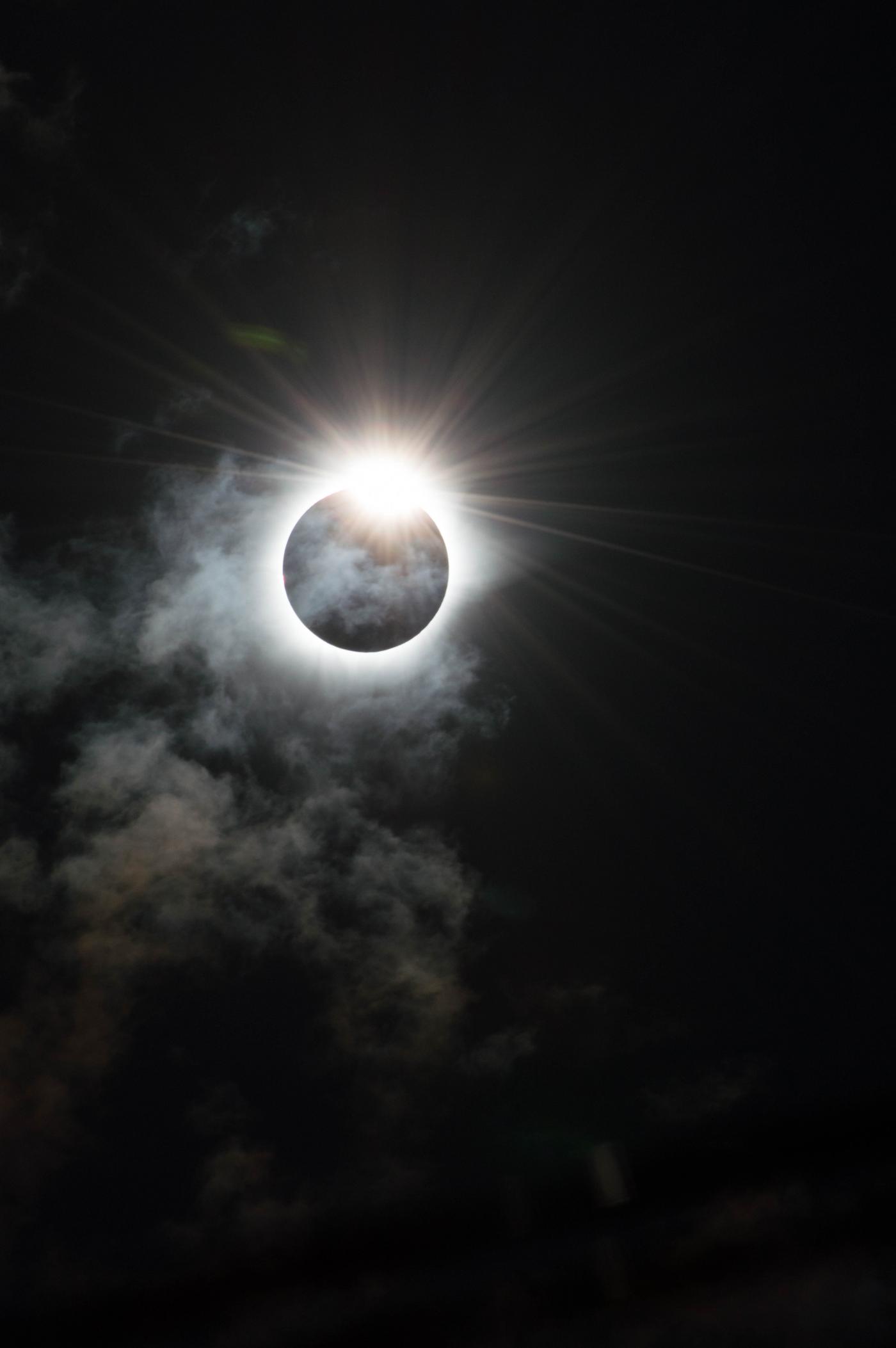 Yu Jun says: I took a series of photos of the 2016 total solar eclipse in Luwuk, Indonesia and stacked them to show the dramatic Baily’s Beads formation. I used shots from the second and third stages of the solar eclipse, which are when Baily’s Beads can be seen. Baily’s Beads occur as the Moon passes in front of the Sun. From Earth it seems like the sunlight seen around the edge of the Moon is broken into fragments because the uneven lunar surface obscures some of the light. This creates the illusion of a string of beads encircling the Moon. Sometimes at this stage you can also see what is called the ‘Diamond Ring Effect’ where only one bead of light is prominent.

Eclipses in myth and history

Ancient myths from many cultures around the world have explained eclipses as a time when an animal or demon eats the Sun or Moon.

Even today, modern superstitions exist surrounding eclipses, with some believing that they could harm pregnant women. Scientists have debunked these modern superstitions; the only precaution you need to take is protecting your eyes when viewing the Sun.