The James Webb Space Telescope (JWST) is the most advanced and most expensive telescope ever built.

It has often been referred to as the 'successor' to the Hubble Space Telescope, which was launched in 1990. But how similar are they really?

When will the James Webb Space Telescope first images be released?

NASA will release the James Webb Space Telescope’s first full colour images and spectroscopic data on Tuesday 12 July at 3.30pm UK time (2.30pm UTC). The images will be revealed during a live stream available to watch below, and also shared on the NASA website and social media channels.

What type of light do the telescopes see?

Light travels in a range of frequencies along the electromagnetic spectrum. Our eyes have evolved to detect the band of the spectrum which is known as ‘visible light’, which is unsurprising given that our atmosphere blocks out many of the other wavelengths.

However, there are many other forms of light we cannot see, both inside and outside our atmosphere.

Infrared light has a longer wavelength and can pass through objects in space that visible light is blocked by, such as gas and dust. This is why images taken using telescopes which detect infrared frequencies can pick out objects beyond these clouds, and appear clearer than those taken using other telescopes.

Because JWST doesn't cover the same types of light that Hubble is capable of, it isn't truly 'replacing' the same capabilities that Hubble has.

However, while we will lose out on the ability to see in ultraviolet light in the same way that Hubble did, by expanding the range of wavelengths out to infrared light, JWST will provide access to a part of the spectrum that Hubble never had.

Light plays a key part in us being able to understand more about about the Universe – but what actually is it? Join Royal Observatory Greenwich astronomers to find out.

How big are the Hubble and James Webb Space Telescopes?

JWST will have a vast sunshield used to help keep the telescope cool. This is important for all space telescopes but is particularly true for infrared telescopes like JWST as 'warm' objects radiate lots of infrared light.

If the telescope itself isn't kept cool, then the telescope risks blinding itself to the light of any object it is attempting to observe.

The main improvement here though is the telescope aperture.

This is effectively the size of the hole at the end of the telescope, or, in the case of telescopes like these, the size of the mirror that is used to collect the light. It's the equivalent of the pupil at the centre of our eye, the dark 'hole' that lets in light.

The larger the aperture, the more light the telescope can gather in one go and so the fainter an object it can see.

Hubble, with its 2.4 metre aperture, can see objects at least 60,000 times fainter than the human eye (which is then greatly extended by using cameras to take long exposure photographs).

With a mirror almost three times wider, JWST will be able to see objects almost nine times fainter than Hubble, allowing us to peer even further into space. 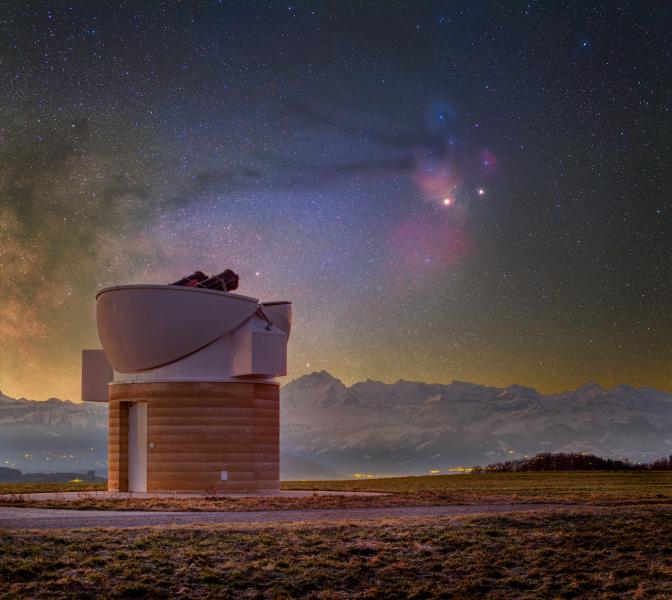 Attraction
Royal Observatory
Visit the home of Greenwich Mean Time (GMT), the Prime Meridian of the world and London’s only Planetarium
Visit now

What are the distances between the telescopes and Earth?

Space-based telescopes have a huge advantage over ground-based ones. By being above the atmosphere they don't have to peer through the shifting air to see into deep space, granting them a clearer view than most ground-based telescopes can achieve. They are also unaffected by the weather, which can be a big problem for astronomers.

However, being in space makes fixing things that go wrong considerably more difficult. Hubble famously had a small flaw in its mirror upon launch that required a mission into space to fix.

JWST will have no such rescue. At 1.5 million kilometres away, far further than any human has ever travelled, if something goes wrong it won't be possible to head into space and fix it.

It is being placed in such a remote place for several reasons. It keeps the telescope far from the reflected radiation of the Earth, one of many choices designed to keep this highly sensitive telescope cool. It will also be in a place where the gravity of the Sun and Earth work together, making it easier to keep the satellite in place.

How far back in time can JWST see?

The further away an object is, the further back in time we are looking. This is because of the time it takes light to travel from the object to us.

With JWST's larger mirror, it will be able to see almost the whole way back to the beginning of the Universe, around 13.7 billion years ago.

With its ability to view the Universe in longer wavelength infrared light, JWST will be capable of seeing some of the most distant galaxies in our Universe, certainly with more ease than than the visible/ultraviolet light view of Hubble.

This is because light from distant objects is stretched out by the expansion of our Universe - an effect known as redshift - pushing the light out of the visible range and into infrared.

Why has JWST been delayed so long?

Space projects often take longer than expected, but JWST has been more unlucky than most.

It was originally planned to be launched in 2007, but a major redesign, escalating costs and delays led to it being pushed back to around 2018. However, the testing period from 2016 onwards also suffered from long delays, and a further delay was imparted by the global pandemic of 2020.

The telescope finally launched on Christmas Day 2021 at 12.20pm GMT (7.20am EST). Over the next six months, the telescope performed a series of complex deployment operations, including the unfurling of its huge sunshield.

Watch the successful launch back via the NASA live stream below.

Shop
Planisphere & 2022 Guide to the Night Sky Book Set
£18.00
The perfect companions for a night of stargazing. Available for the special price of £18.00 when purchased together.  The Planisphere is an easy-to-use practical tool helps any astronomers identify the constellations and stars for every day of the year...
Buy Now