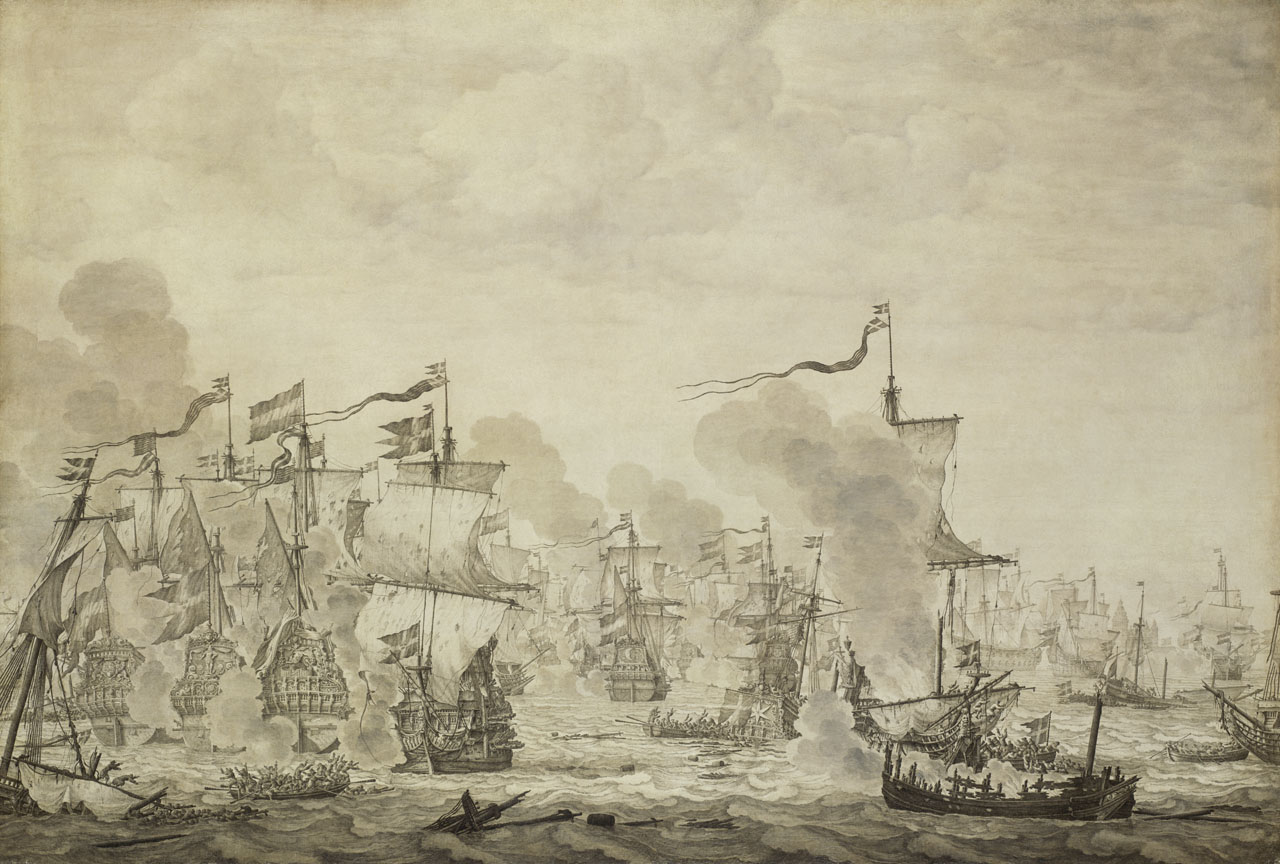 When Sweden attacked Denmark, and occupied both sides of the Sound, it brought Dutch Baltic trade to a standstill. The Dutch sent a fleet to the Baltic under Lieutenant-Admiral Jan van Wassenaer to protect their trade routes from the Swedes, who were besieging Copenhagen. The Dutch victory at the intensely fought battle of the Sound forced the Swedish fleet to withdraw from Copenhagen and the siege of the city by land was abandoned.

This painting of the Battle of the Sound, in 1658, shows a general view of the end of the action. Since the artist was present at the event, this piece can be regarded as an eyewitness interpretation. In the left foreground a Swedish ship is shown in a bow view. She is probably the 'Carolus', 60 guns, with a vice-admiral on board. She fires as she passes the Dutch commander-in-chief, van Wassenaer, in the 'Eendracht', 76 guns, which can be seen in stern view on the starboard quarter of the 'Carolus'. The 'Eendracht', identifiable by the lion and a seated figure of Hollandia within a fence on her stern, is in action with a Swedish ship which is believed to be the 'Merkurius', 46 guns. Close to port, on the far left, is the 'Rotterdam'. She is shown bearing the arms of Orange with lion supporters on the stern. In the left foreground a dismasted Swedish ship has sunk to the level of the forecastle. While figures can be seen with their arms outstretched beseeching rescue towards the over-laden ship's boat in the water. The artist has shown other figures already in the water clinging to wreckage and awaiting rescue. Although no empty boats are available to help them. The sails of the ships have been carefully observed and the sterns of the ships carefully delineated.

In stern view, in the centre middle distance, is the Dutch ship 'Halve Maan' and on her starboard bow is the 'Krona', 74 guns. In the right background is the Swedish commander-in-chief, Karl Gustaf Wrangel, in the 'Viktoria', 84 guns, shown heading towards Kronborg because she had been damaged early in the battle by the 'Eendracht' and the 'Brederode'. A ship ahead of the 'Krona' may be the 'Brederode'. In the right foreground, the remains of a small vessel, probably a fireship, with jagged, burnt timbers provide a dramatic frame for the action beyond. Past this is a Swedish ship which has lost her foremast, seen in bow view. Close on her starboard quarter is the sinking 'Morgentsjarna' with figures leaping or sliding down rigging into the water. In the water, sailors are shown using a boat hook to help hoist them into the small boat. Since this an eyewitness account, van de Velde's depiction of figures desperately jumping off sinking ships and of the gestures of those in the small boats is particularly moving and eloquent. Such details demonstrate the level of terror experienced by the sailors and observed by the artist. He has intentionally included them in his project.

Beyond the ships, in the distance, on the right, the towers of Kronborg Castle at Elsinore are visible. They stand on the Danish shore of the Sound which separates Denmark and Sweden. In this pen-painting, Willem van de Velde employed a comparatively low viewpoint. Consequently, less of the overall action of battle is visible. However, a low viewpoint enabled him to show the multitude of sails, flags and pennants of the Dutch and Swedish ships. They are dramatically outlined against the sky that is toned with grey washes to represent the clouds. Some versions of this pen-painting show van de Velde in his galliot, while others, like this one, omit him, even though he was present at the battle. In the Museum’s collection there is a large drawing which is, also, from the Vattier Kraane collection. In this drawing, van de Velde has depicted himself twice. He is shown positioned prominently on both the right and left sides of the drawing as he sailed round the north side of battle. It is thought that he made his drawings rapidly on large rolls of paper which he often annotated and completed later.

There are eight known pen-paintings of this subject by van de Velde the Elder, all drawn on canvas. These include his largest pen-painting on canvas, in the Pitti Palace, Florence, which was presumably commissioned by Cosimo III, Grand Duke of Tuscany. Van de Velde’s first known pen-painting on canvas, as opposed to wooden panel, is dated 1657. While panel had the advantage of being a rigid surface which was easier to draw on, it could not be used on a large scale. Pen-paintings drawn on a canvas support, like oil paintings, could be made in much larger sizes. Both panel and canvas supports had to be prepared with a white ‘ground’ or surface on which the artist was to work. Canvas had the disadvantages that this white ground took a long time to dry and harden on it, and that it was also less solid to draw on than a wooden panel.

Willem van de Velde the Elder was born in Leiden in 1611, the son of a ship’s captain from Oosterwinckel in Flanders. He may have spent time at sea before becoming an artist. He is often referred to as a draughtsman, or specifically, a ship draughtsman, rather than as a painter. His earliest dated work is a drawing of 1638. From 1639 to 1640 he made designs for prints. During the 1640s, van de Velde was at sometime at sea with the fleet and in 1653 the States General provided him with a galliot and skipper so that he could observe and depict the Battle of Ter Heide (also known as the Battle of Scheveningen). He established an international market for his pen-paintings with patrons in Genoa, Venice, Florence, France, Sweden and England. In 1672/3 he moved to London with his son, Willem van de Velde the Younger, to work for Charles II, James, Duke of York, and other patrons, dying there in 1693.
Back to Search Results
Buy a print License an image
Share:
Link copied to your clipboard!