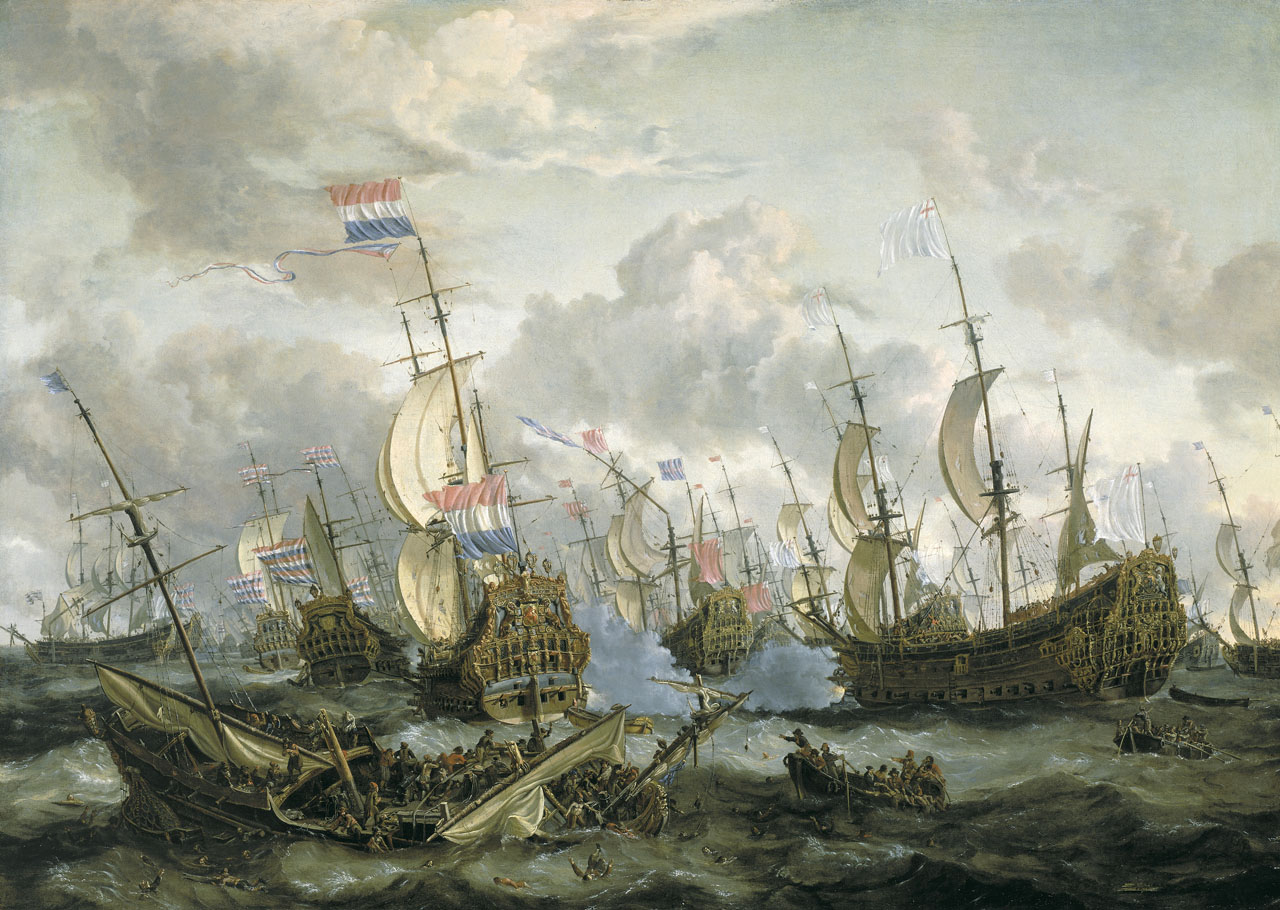 The Four Days Battle was one of several naval engagements, which took place on the southern part of the North Sea, during the Second Anglo-Dutch War (1665-7). The Second Dutch War was one of three trade wars between the British and the Dutch between 1652 and 1673. In the present painting Storck has combined numerous events from the Four Days Battle in order to emphasize the ferocity with which both sides fought. In this action the Duke of Albermarle, as Admiral of the Fleet, with only a part of the English fleet, attacked the whole Dutch fleet under the Dutch Lieutenant-Admiral Michiel de Ruyter. Prominent in the foreground, to the left, is the stern of Lieutenant-Admiral Michiel de Ruyter's ship 'De Zeven Provincien' (Seven Provinces), 80 guns. She flies the Dutch flag from the mainmast together with her squadron pennant. The stern is decorated with the lion emblem of the Dutch Republic which is surrounded by the armorial bearings of the provinces. The date 'Anno 1665' is inscribed on the rail and refers to the year the ship was launched.

On the right the English flagship 'Royal Prince', 85 guns, under the command of Admiral Sir George Ayscue, is shown grounded on the Galloper Shoals on the third day of the battle. She is flying the ensign of the English white squadron on the mainmast and the Stuart royal arms are visible carved on her stern. 'De Zeven Provincien' and 'Royal Prince' release clouds of white smoke as they fire their guns. The ‘Royal Prince’ was eventually taken by Cornelis Tromp and De Ruyter subsequently gave orders to burn her. Visible between 'De Zeven Provincien' and 'Royal Prince' is the ‘Royal Charles', 86 guns, under the command of Admiral George Monck. Her main mast has been severed by a shot and is jutting out precariously. Numerous Dutch ships wearing the tricolour can be seen on the left. The third ship from the left is the 'Eendracht' (Concord), 80 guns, under Captain Aert van Nes, and the one behind the vessel farthest left is Captain Adriaanszoon's 'Reiger' (Heron). The English vessel with the broken foremast, on the far left, is the 'Swiftsure', 64 guns, under Captain Sir William Berkeley. This fell into the hands of the Dutch on the second day of the battle. In the foreground, Storck has shown the panic as an English ship goes down. Her men are frantically trying to reach safety but some have fallen overboard and boats advance from the right to rescue the survivors. The artist has highlighted the drama, intensity and human cost of the fight. On 4 June, the English sounded a retreat after having suffered heavy losses. The victory over their arch-rival at sea was of particular importance to the Dutch Republic and represented the only real Dutch triumph during the Second Anglo-Dutch War, other than the Medway raid of 1667.

Abraham Storck's river and coastal scenes were influenced by Ludolf Backhuysen, Willem van de Velde the younger and Jan Abrahamsz Beerstraten. Storck composed his depictions carefully and was very precise in every detail. He showed considerable accuracy in depicting ships' rigging and technical details. Moreover his Dutch harbour and river views often depict the recreational and ceremonial aspects of shipping. In particular he concentrated on showing pleasure yachts and ceremonial gatherings of ships. He, also, concentrated on depictions of both spectators and passengers. In such work he showed great skill depicting the human figure through characterization and attention to costume and detail. To contrast with the sombre surroundings, he used bright colouring and light and dark effects on the ships’ sails and flags. In this way Storck dramatized his sea battles, which are reminiscent of paintings by his Amsterdam predecessors Reinier Nooms (called Zeeman) and Jan Abrahamsz Beerstraten. The painting is signed 'A Storck Fecit' bottom right on the plank. It is a rare example of a naval battle scene by Abraham Storck. However he is known to have painted three other versions of this subject. A larger version is in the collection of the Fitzwilliam Museum, Cambridge and there are another two versions in Minneapolis and Paris.

Upon his death in 1708, Houbraken described Abraham Storck as a painter of ‘tempestuous and tranquil seascapes’. Storck’s output was extensive, including sea battles, townscapes, river scenes and depictions of whaling. He was born in Amsterdam in 1644, the youngest son of the painter Jan Jansz Sturck, also known as Sturckenburch. It is likely that Abraham Storck and his brothers Johannes and Jacob were trained and educated by their father and the painter Jan Abrahamsz Beerstraten, who was an acquaintance of the family. By 1688 Storck was a member of the Guild of St Luke in Amsterdam. He was buried at the St Anthonis cemetery in Amsterdam in April 1708.
Back to Search Results
Buy a print License an image
Share:
Link copied to your clipboard!