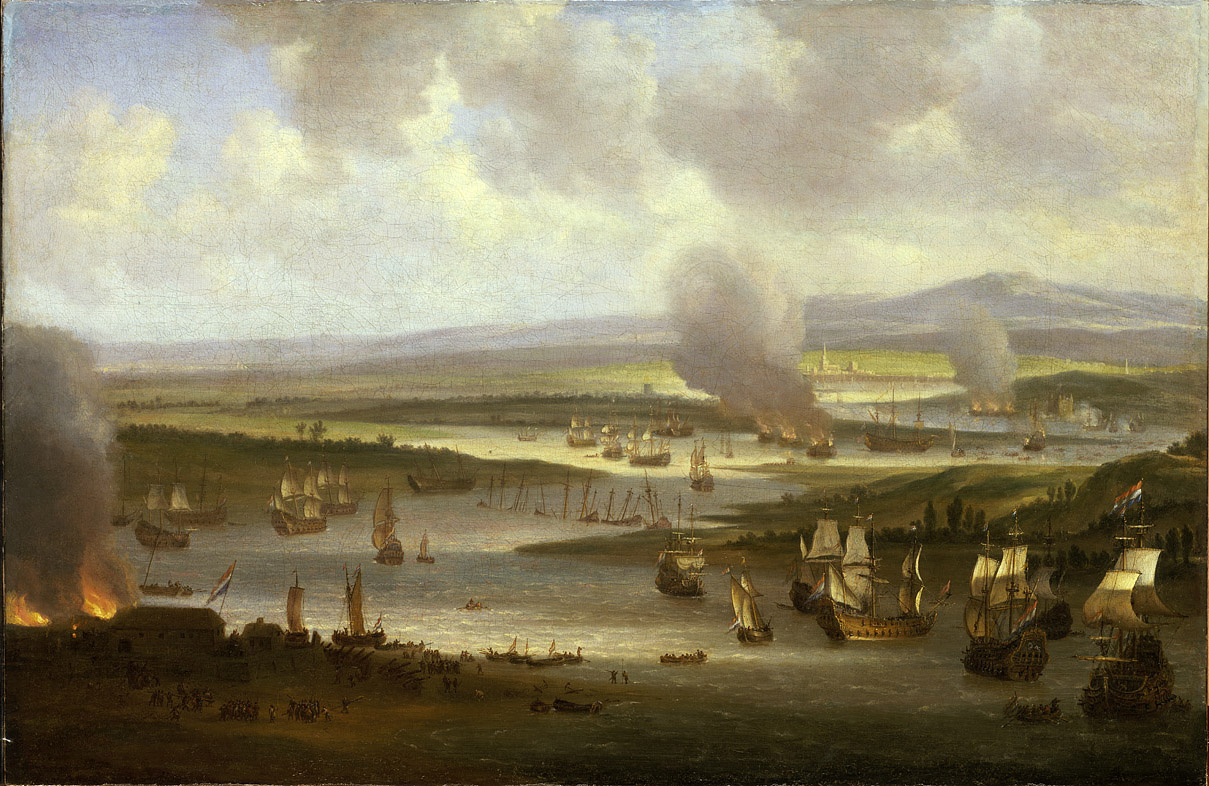 A panoramic bird's-eye view taken from above Sheerness on the Isle of Sheppey and looking roughly south-west towards Chatham and Rochester. In the distance is Rochester Castle and Cathedral, with Upnor Castle discernible to the right and the winding River Medway visible in the centre of the picture. The painting shows Admiral de Ruyter's bold foray into English waters, an event that took place during the Second Dutch War, 1665-67, following the Peace Conference at Breda in May 1667. Although the English were victorious they did not support the peace with necessary force and King Charles II failed to mobilise the fleet, in the mistaken belief that peace would remove the need for this. The Dutch swiftly exploited the advantage by entering the Thames, where on 10 June they captured Sheerness and on 11 June pushed on towards Chatham.

The picture shows the buildings of Sheerness burning in the left foreground with figures running to escape the fire. In the middle distance the ships which were sunk on Mussel Bank to obstruct the Dutch are shown and near them on the far bank is the grounded 'Santa Maria'. Beyond them on the right is shown the captured 'Royal Charles', and to her left fire-ships are wreaking havoc. To the left is the 'Unity', captured by the 'Breda'. In the right foreground is a Dutch flagship, in port-bow view, probably the 'Agatha', 50 guns, flagship of Baron van Ghent, together with several other Dutch ships. Near Upnor Castle three English ships have been burnt by four Dutch ships together with a fire-ship sent against them. Chatham can be seen beyond their smoke.

Willem Schellinks was a Dutch draughtsman and painter famous for such panoramic compositions, who was in England between 1661-63 and kept a journal of this visit. This painting may have been compiled from a number of views Schellink produced as an observer for the Dutch government, and is probably a reconstruction based on a much larger version (one of a pair) in the Rijksmuseum.
Back to Search Results
Buy a print License an image
Share:
Link copied to your clipboard!