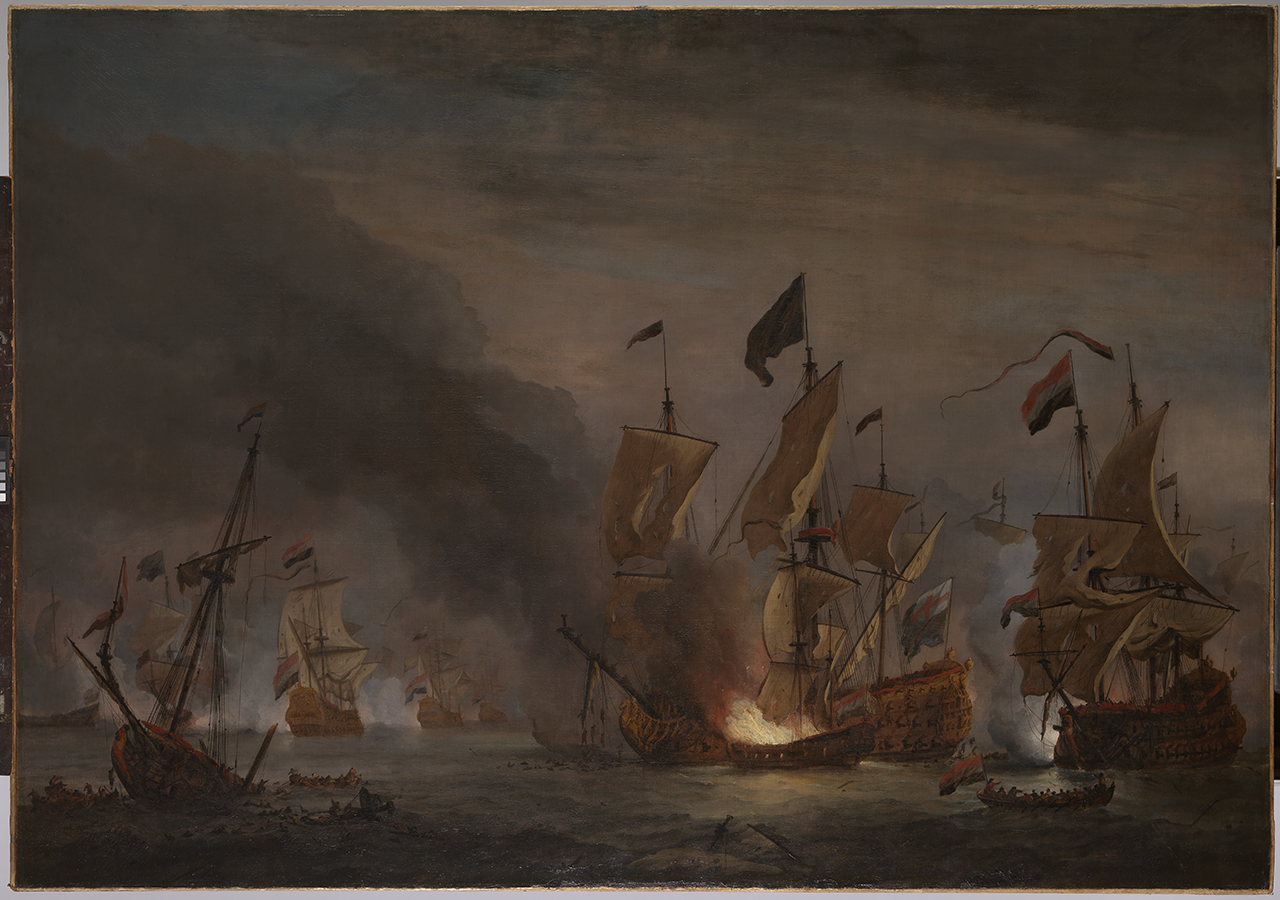 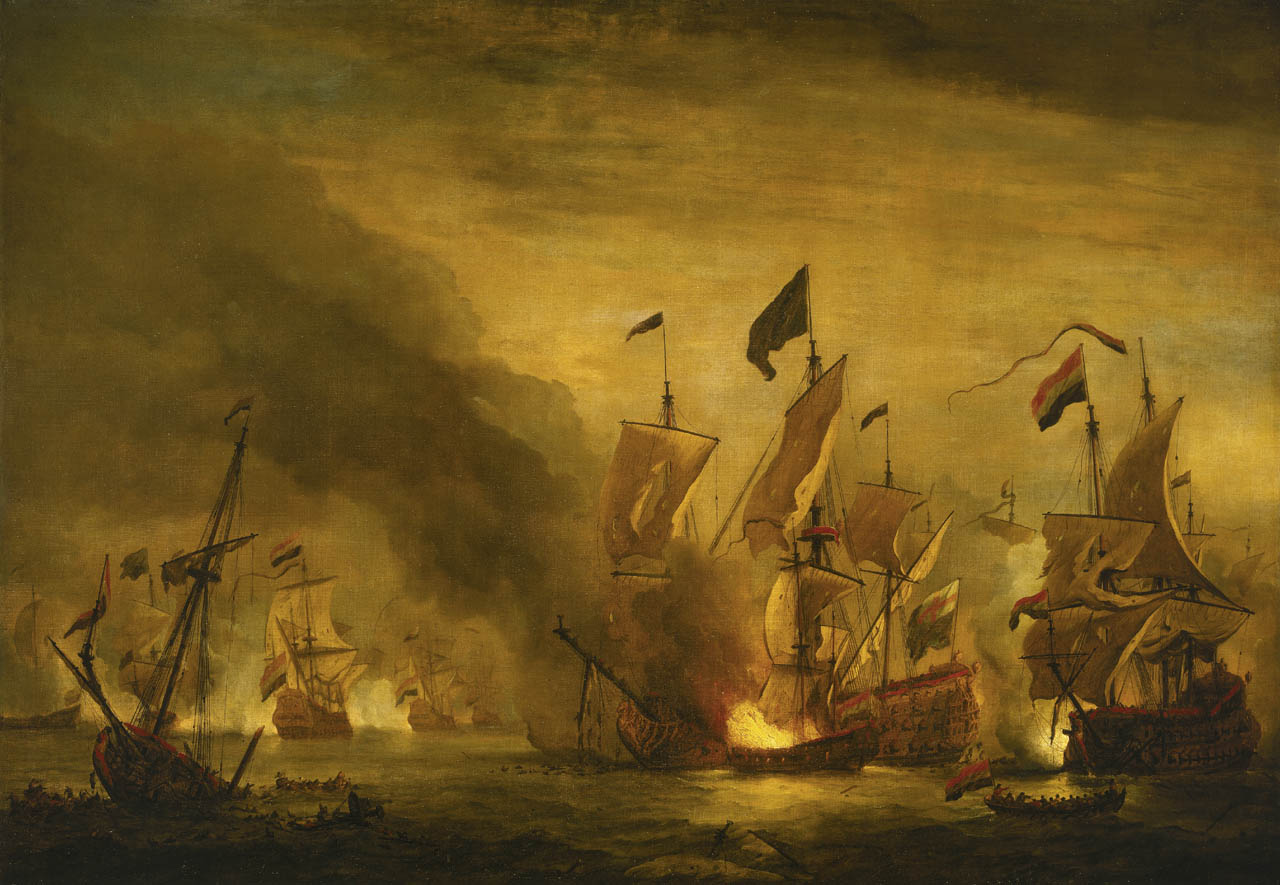 The Burning of the Royal James at the Battle of Solebay, 28 May 1672

The Battle of Solebay was the opening battle of the Third Anglo-Dutch War, 1672-74. On the evening before, Admiral Edward Montagu, 1st Earl of Sandwich, urged the Duke of York to take the fleet to sea to avoid the risk of being surprised by the Dutch while at anchor on a lee shore in Solebay (Southwold Bay, Suffolk) on the English east coast. The advice was not taken and the Dutch fleet, commanded by Lieutenant-Admiral Michiel de Ruyter, did appear and attacked Sandwich's unsupported squadron in the bay. Sandwich, in the 'Royal James', 100 guns, was heavily engaged with the squadron of Admiral Van Ghent, who sent in two fireships. The 'Royal James' sank them both but a third fireship, commanded by Jan van de Rijn, grappled the English flagship and set her ablaze. When she was engulfed by the flames Sandwich tried to escape by boat, but it was swamped by people who jumped into her with him and he was drowned.

In the left foreground is a Dutch ship sinking, viewed from off the port bow, with only the fore part above the water but with bowsprit and foremast still standing. This is presumably a fireship expended in an attempt to burn the 'Royal James'. In the left background is the de Ruyter's 'Zeven Provincien', 80 guns, in starboard-quarter view with a pendant at the main. She is engaged to port with the English vice-admiral of the blue, Sir Joseph Jordan in the 'Royal Sovereign'. Her blue flag at the fore is shown above the smoke as she stands back towards the 'Royal James' after a vain attempt to weather the Dutch. Ahead of de Ruyter is the rear-admiral of his squadron, J. van Nes in the 'Ridderschap'. The 'Royal James dominates the right side of the painting. She is shown in port-broadside view with Jan van Rijn's fireship, the 'Vrede', in flames and about to run aboard her by the fore chains. The 'Royal James' has her torn topsails set and her fore and main courses have the clews hauled up. Sandwich's blue flag at the main is blowing out in the light wind. Men are shown jumping overboard and hanging to the rigging to avoid the fire both fore and aft.

On the right, sailing past the 'Royal James's' port quarter, is a Dutch vice-admiral, viewed from the port bow, with a flag at the fore and pendant at the main. She is under a fore course, a clewed main course, main and mizzen topsails and with her fore topsail much torn and half lowered. In the right foreground is the ship's boat in which the fireship's crew is escaping after setting light to their vessel.

The artist was the younger son of Willem van de Velde the Elder. Born in Leiden, he studied under Simon de Vlieger in Weesp and in 1652 moved back to Amsterdam. There he worked in his father's studio and developed the skill of carefully drawing and painting ships in tranquil settings. He changed his subject matter, however, when he came with his father to England in 1672, by working on views of royal yachts, men-of-war and on storm scenes. From 1672 the depiction of sea battles from the English side became a priority but unlike his father's they were not usually eyewitness accounts. However, from early 1674 both the van de Veldes were expressly patronized by Charles II for this purpose, the father to draw sea fights and the son - who was by far the more accomplished painter - 'for putting the said Draughts into Colours'. After his father's death in 1693 he was officially engaged to be present at and record significant maritime events. He continued to run a substantial and influential studio until his own death and with his father, especially as a painter, he is regarded as founder of the English school of marine painting. The painting is signed 'W.V.Velde J' on the back of the canvas and 'W.V.Velde' on a spar on the left.
Back to Search Results
Buy a print License an image
Share:
Link copied to your clipboard!