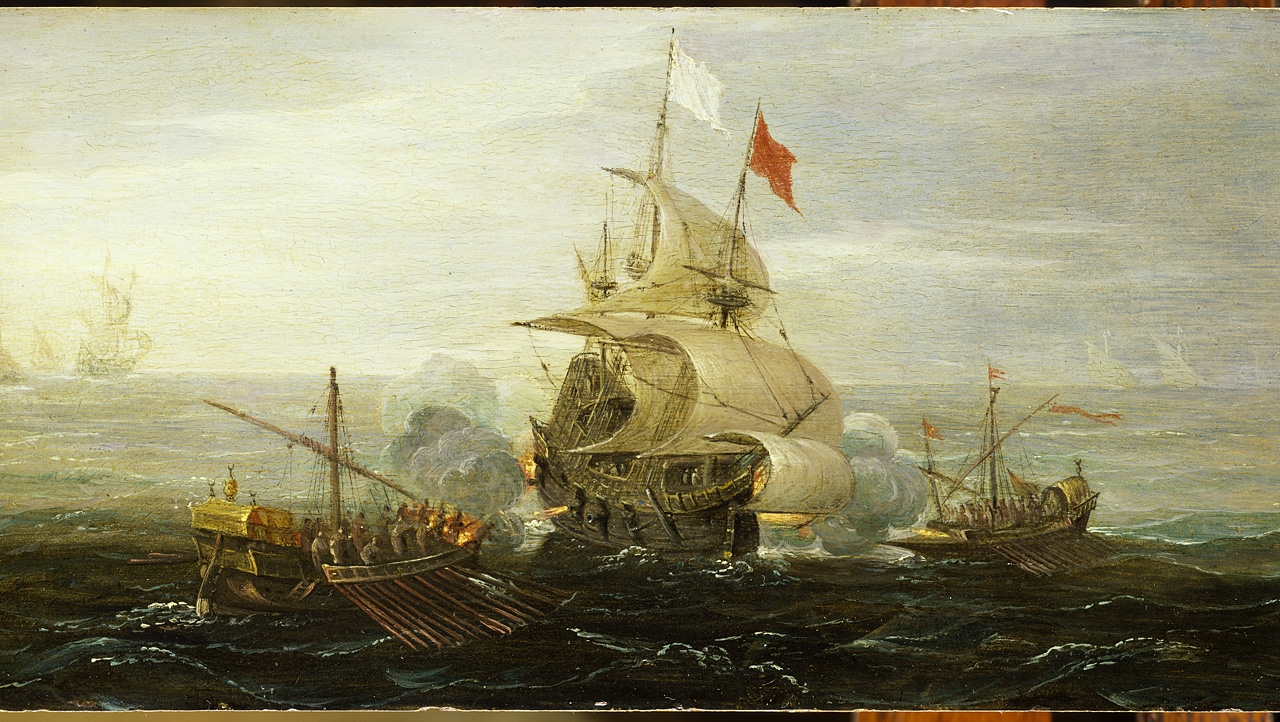 A French Ship and Barbary Pirates

This tiny seascape focuses the spectator’s attention on the dramatic attack on an armed trading vessel by two Mediterranean galleys. Contrasting with the action in the centre foreground, the sea is calm, dark green with fine white crests, stretching towards the open horizon in increasingly lighter hues. Under a light but overcast sky the corsairs launch their assault from either side of the larger ship. All vessels are firing their cannons. The bright flames and billowing smoke seem to lock them together in combat. Variations of the scene appear in two faint groups of vessels on the horizon.

The violent subject matter of the ‘Barbary Pirates’ was popular in Dutch and Flemish painting throughout the seventeenth century and reflected the continuous threat to shipping in the Mediterranean by North African corsairs. The corsairs’ Islamic origin is emphasized through the clearly marked crescents on the galley stern lanterns and finials. This contrast serves to heighten the pictorial and narrative drama. The traditional identification of the ship as French is based on the white (Bourbon) flag at the mainmast. Interestingly, in this panel the artist has rejected the possibility of adding a Mediterranean coastline and any topographical reference is conveyed solely by the vessels themselves.According to his notebook, Eric Palmer acquired the small cabinet piece before 1955, as a work painted by ‘Antum’, and was obviously unaware of the style as that of Aert Anthonisz. The influence of Hendrick Vroom, who is assumed to have been Anthonisz’s teacher, can be seen in the depiction of the trading vessel. The fairly high viewpoint and the green-greyish colour scheme, which lends the scene a degree of natural atmosphere, are also found in Vroom’s 'Ships Trading in the East' (BHC0727). These stylistic aspects may indicate a date of around 1615.

This said, it has now been suggested (September 2016) based on comparison with the very similar composition of a painting in the Rijksmusum (SK-A-4250) and of a drawing in a private collection, that it may in fact be by the equally rare Cornelis Bol (1589-1666): if so it is early since Bol's style, though colourful, became rather lighter in tone than this example.
Back to Search Results
Buy a print License an image
Share:
Link copied to your clipboard!